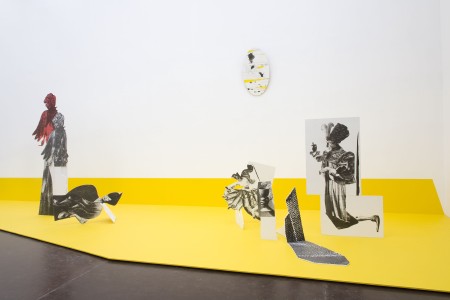 In his last televised interview – broadcast by the BBC on the evening of 12 November 1985 – the writer and former petty criminal Jean Genet was asked about his current plans. ‘J’attend la mort’ (I’m waiting to die), he replied, fully aware – one somehow guessed – that he might also be saying, ‘J’attend l’amour’ (I’m waiting for love). Nearing the end of his life, and having chronicled in his elaborate fables the canonization of thieves, pimps and condemned killers, Genet was now just waiting, seemingly at rest with his own decisions, but enduringly alert to the elaborate cosmography of reversals, contradictions and blasphemies that he and his writings had left in their wake.

A similar sense of expectancy appeared to stiffen the air around Clare Stephenson’s meticulously poised and quietly confrontational exhibition at Spike Island, ‘She-who-Presents’. Of eight towering wooden cut-outs of extravagantly costumed and poised figures, all but two were grouped upon a shelf of buttercup-yellow decking, flush to a false wall within the gallery’s well-lit and cavernous main space. Of the two remaining figures, one was positioned beside a white-painted frame of wooden slats, downstage left, so to speak, from the main group. The other, standing within a loose tessellation of scarlet, screen-printed tablets, was tucked just out of sight in the ‘backstage’ area behind the rear wall, to the right of the viewer as they exited the installation.

Deriving from small collages (which are then transposed into two-metre-tall, screen-printed cut-outs), the figures in ‘She-who-Presents’ appeared at once melancholic, aloof and stern. They were less androgynous than possessed of the curiously skewed dignity that can characterize certain forms of transvestism and heightened style: a weighed-down bearing that is at once regal and unwieldy. Also on the axis of drag, Stephenson’s figures made no attempt to conceal their fabrication. The edges of the cut-outs were left white and broad; the figures rested on plainly visible wooden supports – carpentry equivalents of crude paper engineering. There was ultimately an air of light industry to these exotic creatures – a seeming contradiction, though entirely in keeping with the labour-intensive demands of self re-creation and stylized posing.

Deriving from the details of Gothic sculpture and architecture out of which Stephenson created their originating collages, these figures conflate Modernism and medievalism – a curiously etiolated aspect of over-refinement – in a manner that one might associate with portraits of Erik Satie or the Sitwell siblings. Referencing the flamboyant language of Genet’s fantastical novel of prison life, Our Lady of the Flowers (1944), the figures were named in the spirit of ceremonial camp, in which titles simultaneously aggrandize and mock: Miss Quite-Transcendent (all works 2009), for example, or Our-Lady-of-the-Conscious-Optics, or The Unicorn.

The installation recalled a mannequin display in a department store, or a waxworks museum, or a stage set. The faces of Stephenson’s figures are at once sexless and handsome: their flamboyant costumes, as depicted on flat surfaces, on the one hand cumbersome and home-crafted in appearance, on the other reminiscent of Vivienne Westwood’s reclamations of Caroline and Stuart fashions, or of the epic, again medievalist, self-styling made famous by the late Isabella Blow. Our-Lady-of-the-Conscious-Optics, standing like one half of a diptych completed by the inscrutable frame of wooden slats beside her, brought to mind the elegance of Pierre Cardin’s or Yves Saint Laurent’s more futuristic designs from the 1960s. The Unicorn, by contrast, appeared to be more of a 1920s flapper – baby-faced, sinisterly child-like. Presiding over the main group, She-who-Presents was a Biblically gesturing figure – as though Sir Ben Kingsley had been styled by Elsa Schiaparelli – depicted on a linear patterned oval that brought to mind Stephenson’s 2007 series of ‘Bandaged Heads’.

What might all of this mean – if ‘meaning’ has a place within the contrary ambitions of auto-faction, camp and pose? On a table at the entrance to the exhibition, Stephenson’s selection of nominated books – including Our Lady of The Flowers, La-Bas (The Damned, 1891) by Joris-Karl Huysmans, and a feminist study of Marcel Duchamp’s transvestite alter-ego Rrose Sélavy – gave a clear indication of the territory (or should that be ‘realm’?). For throughout ‘She-who-Presents’, a sense of debased and alternate monarchy prevailed – a further echo of Genet’s long-held fantasy that prisons are in fact royal palaces, and that his own name, copied down on police reports, derives from that of the Plantagenet kings. In their bravura confluence of glamour and inscrutability, Stephenson’s oddly grave, awkwardly stylish and clumsily regal figures, for all their air of gravitas and sacrament, propose both Genet’s alternate aristocracy of the damned, and a gathering of ineffectual avatars, reduced to signage in a waiting game.