A sense of magnitude invariably dominates discussions of Theaster Gates’s practice. Over the past 15 years, the Chicago-based artist has created a body of work that exists within ever-widening parameters. Gates makes paintings, sculptures, installations and films, though is perhaps most recognized for his purchase of abandoned buildings in Chicago’s South Side, which he restores as spaces for community use. These social projects are cultivated through the artist’s non-profit Rebuild Foundation, launched in 2009. Most recently, as part of this initiative, Gates spearheaded the revitalization of a 1.3-acre plot, which yielded a neighbourhood-led green space, Kenwood Gardens.

Gates is also known as a performer, leading an experimental music ensemble, the Black Monks, whose synthesis of jazz, gospel and spirituals often frames his exhibitions. The artist’s commitment to preserving the legacies of Black American culture has also shaped his role as a collector and custodian, resulting in acquisitions from numerous defunct local landmarks in Chicago: whether records from the trailblazing music store Dr. Wax, the Johnson Publishing Company’s back catalogue of images from Ebony magazine, the personal vinyl collection of the legendary DJ Frankie Knuckles, or hundreds of titles from one of the country’s last architecture bookstores, Prairie Avenue Bookshop, prior to its closure. The artist houses these materials within his most prominent building restoration, Stony Island Arts Bank, which functions as an open-access library and exhibition space.

In a 2013 article for Chicago Magazine, Gates was described by the curator Hamza Walker as ‘nine things at once’. Yet, the artist does have an anchor. ‘Clay made me and is forever the root of my artistic interest,’ he told Ceramics Monthly magazine in February. ‘I always find myself returning to the vessel.’ In October 2020, Gates’s first New York solo show opened at Gagosian. Conceived around his clay compositions, ‘Black Vessel’ pointed to qualities that were both concrete and otherworldly. The sculptures consisted of forms ranging from stately kettlebells and spiked spheres to biomorphic pots. The social component of the work – in one gallery, viewers were obliged to circumnavigate more than two dozen densely packed sculptures installed either directly on the floor or on low plinths – emphasized Gates’s interest in ceramics as a means for social gathering.

Issues around cultural hybridity were likewise brought to the fore in ‘Afro-Mingei’, Gates’s exhibition of ceramics at White Cube, London, in 2019, which explored the relationship the artist had been developing for some time between two important strands in his practice: Japanese aesthetics and Black identity. In one work, Afro–Ikebana (2019), Gates placed a globular pot containing a branch on stacked tatami mats, above which hung a bronze, mask-like sculpture, evoking formal rituals, such as Japanese flower arranging, as well as those based around totem practices. Earlier in his career, Gates participated in a ceramics residency in Tokoname, Japan, where he worked with a group of master potters for several months. One of his teachers, Koichi Ohara, remains a long-time collaborator.

Speaking with me weeks before the opening of a major survey themed around his pottery at London’s Whitechapel Gallery, the artist reckoned with the unique value of clay. ‘In other cases, I feel quite like a trickster; it doesn’t matter if a person knows what my intention is,’ he said. ‘With clay, there aren’t any gimmicks.’ His exhibition, ‘A Clay Sermon’, features sculptures made over the past 20 years, outlining Gates’s evolution, and a film about the artist’s recent ceramics residency at the Archie Bray Foundation in Montana, which reveals, in his words, ‘the ways in which I’m shaped by things, versus me shaping things’.

‘A Clay Sermon’ explores such multiplicities within craft through the inclusion of objects by other makers. Gates selected these pieces from the ceramics collection at the Victoria and Albert Museum, during his fellowship at the V&A Research Institute in 2019, and will present a pair of new sculptures in the museum’s ceramics galleries this winter. While Gates’s counterparts in the Whitechapel Gallery show are an attempt to acknowledge his ceramic influences – from Michael Cardew and Shōji Hamada to Magdalene Odundo and Lucie Rie – they also explicitly reveal the dynamics of clay within the context of colonialism. One of the first objects encountered in the exhibition is an architectural fragment from a European-style palace built by Jesuits in Beijing. Commissioned by the Qianlong Emperor, who ruled China for most of the 18th century, this striking turquoise-glazed fragment signifies the country’s receptivity to Western design, which was often considered exotic. Other items include the first anti-slavery medallion, manufactured in 1787 by British potter and abolitionist Josiah Wedgwood. Depicting a chained man under the words ‘Am I Not a Man and a Brother?’, the medallion became one of the few well-known images of a Black person during the period. Gates likens aspects of the V&A’s collection to ‘a saga of power, where some leaders were benevolent and generous, and others were ruthless and concealing’, adding that such narratives confirmed that ‘other people’s ways of being were critical to the formation of British identity’.

The monumental stoneware pots made by David Drake, which appear in ‘A Clay Sermon’, have arguably been the most vital influence in shaping Gates’s ethos as a potter. While enslaved in South Carolina, Drake produced vessels that were later identified because he had inscribed his name, along with original lines of poetry, onto his creations. Described by Gates as one of his heroes, Drake signals ‘one of the few moments where Blackness has shown up for me in craft, in a historical way’. During the initial stages of his clay-based making, Gates was conscious of asking ‘who are the other African American potters?’ in his quest to look to something that felt ‘a little more like home’. The artist first explored Drake in ‘To Speculate Darkly’, a 2010 exhibition at the Milwaukee Art Museum, in which he embodied the potter through performance, ‘to sing his name as if it were mine’. As well as highlighting the history of Black labour within the US, the presence of Drake provided Gates with the apparatus to think about his own identity as a Black maker. In a lecture that accompanied the show, Gates spoke of spending 12 years ‘struggling to find a way in a world filled with white craft potters’.

Race continues to permeate Gates’s practice, but the artist no longer needs to ask questions through an alternative guise. ‘I’m invested in Japanese ceramics and the history of ceramic production relating to industrial slave labour, and now I can talk about those things in the first person, not the third,’ he says. ‘When I’m making a pot,’ he concludes, ‘I feel like I’m being my most conceptual, most contemporary self.’

Theaster Gates's solo exhibition, ‘A Clay Sermon’ is on view at Whitechapel Gallery until 23 January 2022, while his display 'Slight Intervention #5’ is open at the Victoria and Albert Museum until 9 January 2022.

This article first appeared in frieze issue 223 with the headline ‘Returning to the Vessel’, alongside Helen Cammock On How She Lived her Father’s Ceramics, How Travel Transformed Magdalene Odundo’s Ceramics Practice and How Clay is Connected to our Bodies: A Roundtable Conversation.

Allie Biswas is a writer and editor. She co-edited The Soul of a Nation Reader: Writings by and about Black American Artists, 1960-1980 with Mark Godfrey, published in June 2021. She is based in London, UK. 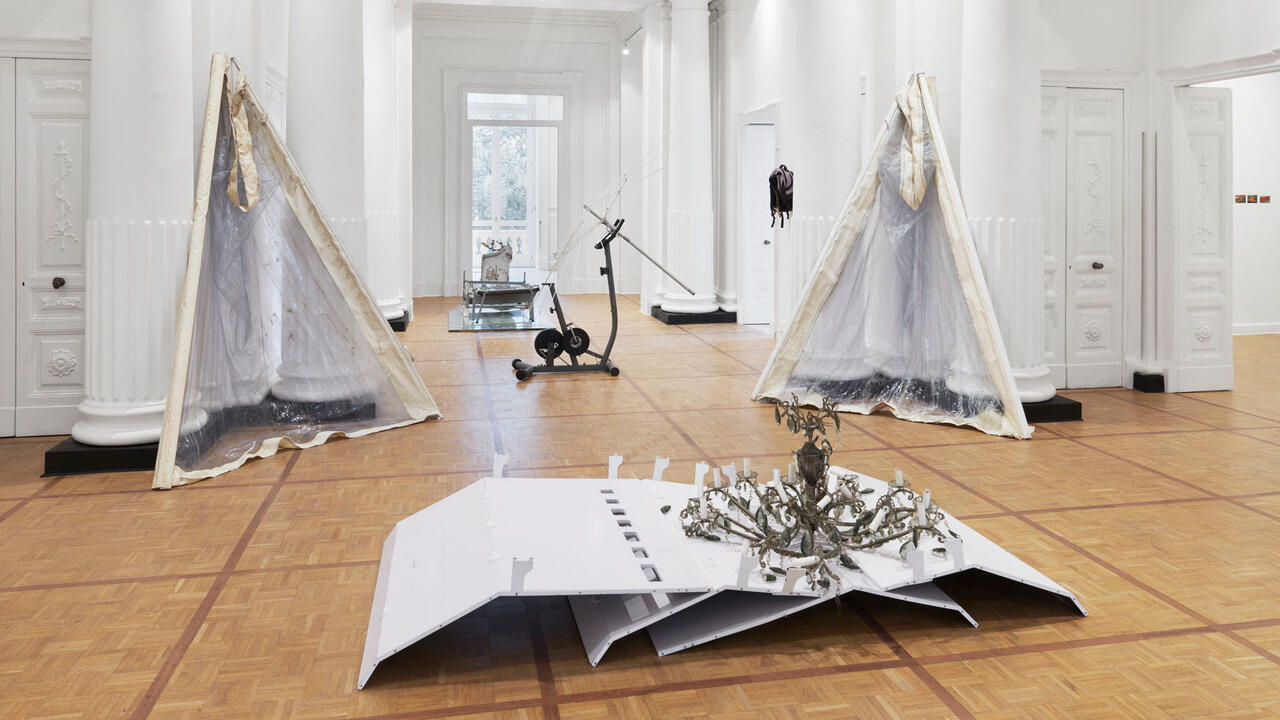