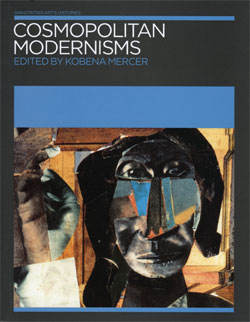 Cosmopolitan Modernisms, edited by Kobena Mercer, is the first volume in a new series titled ‘Annotating Art’s Histories’. It sets out to complicate received ideas regarding the cross-cultural dynamics of Modernism. In his acutely incisive introduction Mercer notes the unintended consequences of visual culture’s ‘tendency to roam across the cultural sphere at large’. Such swaggering interdisciplinarity, he points out, inadvertently ends up reinforcing existing art-historical indifference to the lives and works of minoritarian Modernists.

In setting itself against the amorphous bagginess of visual culture the book argues for and exemplifies a patient attentiveness that bestows what Mercer recently termed ‘the dignity of objecthood’ on the work and the artist. It sets itself against the well-meaning aspiration to inclusiveness evident in recent anthologies such as Unpacking Europe (2002); equally its preoccupation with the relational singularity of stylistic affinity registers a turn towards the aesthetic, which is understood to exceed and elude capture by cultural representation.

The focus is on fine-grained revisionism; the postwar Modernist project is revisited in case studies, each of which is supported by powerful double-page reproductions. Mercer investigates the oeuvre of the great artist Romare Bearden (surely due for a retrospective) via Ralph Ellison’s 1968 account of ‘the horrible fragmentation which Bearden’s subjects and their environment have undergone’; Lowery Stokes Sims teases out the genealogical iconographies of Wifredo Lam; while Ann Lewis revisits the ambiguities of universalism that informed abstractionist Norman Lewis’ postwar black paintings.

These essays are offset by a fascinating conversation between Mercer and art historian Partha Mitter, author of Much Maligned Monsters: A History of European Reactions to Indian Art (1977). In a wide-ranging dialogue that centres on Mitter’s revisionist notion of Primitivism as anti-colonial strategy and counter-Modernism, historical moments such as the 1922 exhibition of Paul Klee, Wassily Kandinsky and other Bauhaus artists initiated by Nobel Prize-winning poet Rabindranath Tagore are retrieved and contextualized in a compelling account of nationalist and pan-Asiatic Modernisms in 20th-century India.

Cosmopolitan Modernisms is animated by the reappearances of forgotten conjunctions and overlooked characters that should command whole volumes in their own right: figures such as the half-Hungarian Amrita Sher-Gil, India’s first professional woman artist, and Sukumar Ray, the father of film director Satyajit Ray, who wrote the first article on Cubism in India in 1914. Mercer recalls how Bearden nearly studied with Gaston Bachelard but declined on the ground that his French wasn’t good enough, while David Craven points out how the Trotskyite radical, historian and cricket aesthetician C.L.R. James corresponded with his art historian friend Meyer Shapiro in the 1950s. James’ 1980 essay on Pablo Picasso and Jackson Pollock is published here for the first time; another first is Michael Asbury’s translation of Ferreira Gullar’s Theory of the Non Object (1959), a tightly argued manifesto that cleared a space for the international-style Modernism of the Brazilian neo-Concretist school.

Cosmopolitan Modernisms is a volume whose rigorous revisionism is matched only by its principled modesty; one is left waiting for the painstaking termite-criticism of future volumes.