Charlie Fox on a new translation of Hervé Guibert's chronicle of love, lust and drug-addled longing

Hot question: to what extent is another person a drug, whether a stimulant, depressant, hallucinogen or some deranged combination of the three? That’s one of the conundrums haunting Hervé Guibert’s Crazy for Vincent (originally published in 1989 and newly translated by Christine Pichini for Semiotext(e)), a question further addled by the fact that the two male lovers at its centre are forever blitzed on their own marvellous pharmacopoeia: opium (‘brown sugar’), ecstasy (‘that vile white powder’), booze or hash. This slim volume is a diary prone to dreamy wandering that chronicles the true story of Guibert’s infatuation with Vincent Marmousez, a sweet and tender hooligan who sometimes seems closer to a phantom tormenting our narrator – ‘I thought I had seen a ghost’, Guibert notes when Vincent materializes early in their relationship. Crazy for Vincent consists entirely of vertiginous highs or heartbroken comedowns, and kicks off like a lurid thriller with the titular hunk’s corpse laying on the pavement following a tumble from a third floor window. Guibert (who died from AIDS-related illnesses in 1991, aged 36) never megaphones the thought that these circumstances make his inamorato the scuzzy Parisian equivalent of Icarus, but the parallels are difficult to resist. Vincent is a goofy young daredevil watched by a (somewhat) wiser and older artist, he gets too high and dies. Pinpointing these narcotic effects, Guibert also records what the poet John Ashbery once identified as the ‘vast electrical disturbance’ that a rambunctious boy creates for anybody who’s kinda smitten, with their sense of class and sanity lost in the swirl.

It’s all very steamy. Guibert remembers getting down to Prince’s ‘Kiss’ at the discotheque (His Royal Purpleness’s vow ‘You don’t have to be beautiful/To turn me on’ set in call-and-response with Vincent’s laments over ‘my ugly face!)’; Guibert calls Vincent ‘an expert at my gratification’. What’s really craved is the tingle from one body entangling with another – ‘nobody’, Guibert claims ‘touches me like this’. Given the timeframe and Guibert’s fate, AIDS skulks in the shadow of all this rapturous activity. ‘You’re really scared of it, huh?’, asks Vincent with a funhouse grin whilst Leos Carax’s magical Mauvais Sang (Bad Blood, 1986) plays at the cinema. In his evocation of Vincent’s body, Guibert also takes mortifying notice of his herpes, scabies and the ‘fungus’ growing on his feet. ‘He says if it’s AIDS, he’ll rob a bank, or maybe he’ll shoot himself during the hold-up.’

What’s hotter to think about is how obeying the demands of the récit (a French form distinguished as something like a philosophical and fragmentary monologue on a lone subject) mimics the feel of true obsession: nothing matters but Vincent. It’s not as if Guibert’s other activities were insignificant. Like his spiritual master Jean Genet, he was one of the great thinkers of queer desire, not to mention an acclaimed critic, screenwriter, novelist and filmmaker. Some of this is acknowledged amidst the craziness, but here even nuclear disaster is a flash in the background: ‘meanwhile a radioactive cloud floats over Europe’, he writes, noting Chernobyl’s meltdown. 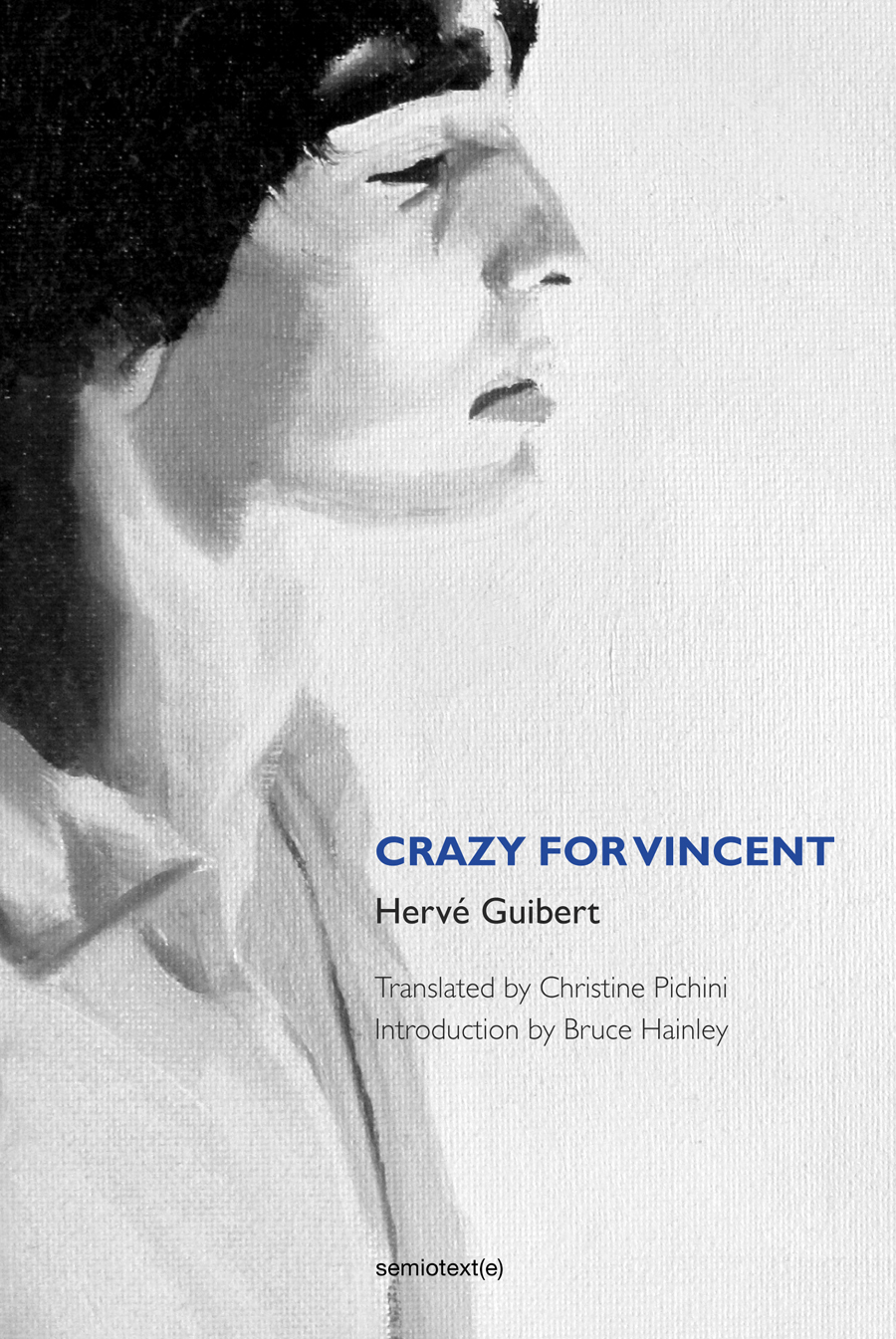 The ramifications of this singular focus are radioactive in their own subtle fashion, with Guibert laying out a world denuded of everything but the material irradiated by Vincent’s touch, including a toy flying saucer that he imagines repurposing as a reliquary for his idol’s ‘sex’. So lucid is the attention Guibert pays to his fluctuating internal world that he can seemingly turn himself inside out on a whim. The book’s substance is revealed in successive freeze-frames that see Guibert (always fascinated by the ghostly effects of photography) stop, bewitched, and consider the next moment of their relationship. A shady picture of him and Vincent hanging out ‘dans l’atelier Balthus’ is reproduced early in the book. Vincent’s precise age is a murky detail, but he must be halfway through his teens, a perfect coeval for the nymphs seen in the French master’s creepy portraits.

But Balthus was into girls, while Crazy for Vincent belongs in the tradition of what you might call ‘fucked-up boy art’ – not verifiably straight or gay, but just devoted to ogling the hot wreck of a handsome young thing out of his mind. Vincent doesn’t call himself anything whether he’s hopping into a cerebral dude’s bed or frolicking with a babe – ‘he just got his paycheck and he likes to spend it without me, with girls, the punk’, Guibert snarls. A history of this tradition might begin with Caravaggio’s Young Sick Bacchus (c.1593-95), that self-portrait of the artist totally wasted with his flesh tinged green, move through Anne Carson’s ‘verse novel’ Autobiography of Red (1998) and Larry Clark’s entire career, before climaxing with Ryan McGinley’s shots of the late Dash Snow. Who could resist these beautiful hoodlums, even if their company turns out to be fatal?

Maybe it’s all about the fascination flowing between a gay chronicler and his hazily ‘straight’ subject, narcotics everywhere stimulating their romance, but an equally disorientating intimacy happens between Guibert and his audience. He traps the experience of being inside a body mad with desire, ‘ready to open up my chest to lay my heart at his feet.’