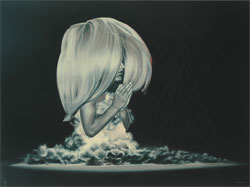 Dutch artist Cris Brodahl’s sepia-toned paint-ings have the feel of time taken slowly. Rendered in a Photorealist style, the misshapen, mostly female ?gures appear to have deliberately moved beyond conventional beauty. Brodahl begins by collaging cut-outs from magazines, combin-ing fashion imagery with subdued allusions to power. She reworks the source material as she paints, drawing out connections among the pictures and foregrounding their latent meaning. Images of glamour are touched with shades of violence; what was whole appears lacking. Clouds from a nuclear explosion suggest a woman’s gently dispersing torso; a newspaper obscures a woman’s face. An immediate resem-blance to Surrealism gives the impression of quasi-legible signi?cance, bound by the internal logic of each piece.

Time and again idealized femininity meet its own decay: in Longing (2005) a woman lies on her side, her young face resting on her skeletal hand. Death is both alluring and fearsome, a duo expressed concisely in the pearly vagina dentata of Beautiful Skull (2004). Other paintings suggest the impossibility of absolute beauty through ab-breviated ?gures: a woman intimated only by an elegant hand, roses and a single eye; clouds issu-ing from a man’s upturned collar. Faces are often formed from two separate sources, which collide in a line down the centre like some latter-day demoiselle, turning the two model-perfect halves into one monstrosity.

Part of the critique advanced by feminist artists in the 1970s and ’80s was aimed at the objecti?cation of woman in the media and the allegorical role of the female ?gure in painting. Their work emphasized, in contrast, the dif? cul-ties behind any attempt to represent woman as she is in herself. How far Brodahl goes in this direction is uncertain, though the status of the female subject as represented representa-tion seems explicit: women are statuettes (Wax Altar, 2004), fashion models (Silence, Make-Up, both 2004), music icons (The Jean Genie, 2005). Similarly, her technique of isolating images from fashion magazines yields unexpected parallels to the more critical practice of artists such as Sarah Charlesworth. Compare, for example, her White Nails (2004), in which the Grecian folds of a torso spring out of a manicured hand, with Charlesworth’s photo of Marlene Dietrich’s white satin dress, from the ‘Objects of Desire’ series (1983). Brodahl’s attitude towards her material is more ambivalent, however – her appropriation of fashion photography is more a gesture of reclamation than critique.

In part this leeway is made possible by col-lage, with its ability to embrace contradiction. In the graceful Silence, for example, a magazine model’s head is covered from her top lip up-wards by the image of a tree in a cloudy sky, its branches forming the features of her face. The painting interprets its title variously: the silence of the represented woman; the speci? c silence of Brodahl’s ?gure, with her half-mouth; and the pastoral evocation of a silent landscape. The rendering of collage as oil paintings thematizes the concerns that were addressed in the 1970s and ’80s and, in so doing, formalizes them.

It is this intentional distance between the audience and the painted ?gure that supplies the missing link between the works’ use of fashion imagery, nods to Surrealism and the evocation of old, sepia photographs. (They’re the colour of ‘19th-century’ pictures taken in studio booths at Disneyworld.) Brodahl’s is a world where meaning lies at a remove: depictions captured by another hand, subconscious meaning and signi?cance that are lost in the past. Her subjects exist in a regime to which the spectator does not have access – the women in The Jean Genie, Brodahl’s painting from David Bowie’s video, are unapproachable not because of their glamour or iconicity but because of their inscrutable expression and the painting’s indeterminacy.
Ironically, while trekking in Freudian territory, Brodahl’s images are tightly controlled. Slips look deliberate, and any weirdness appears seemly enough to print in Harper’s. More than anything, it is Brodahl’s ability to evoke a sense of stillness that distinguishes her canvases – this within potentially explosive subjects. The terri?c Glass Cathedral (2004) depicts a woman – she of the nuclear-cloud body – praying with oversize hands held close to her blond hair, while next to her the black canvas is marked by scored hatch-marks. The work reconnects beauty, violence and representation, and suspends the scene outside time. Urgency is lost, and observation is rewarded.