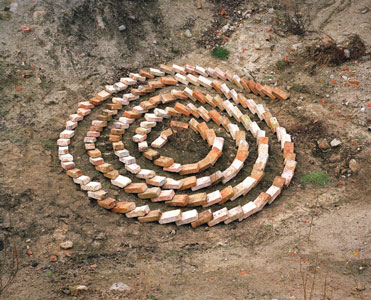 There is a childlike delight to be had in knocking over a row of dominos. Disconnected entities suddenly become connected, movement ripples through stasis, and objects that a moment earlier had no physical bearing on each other now interact, taking on, for an instant, the characteristics of a single organism.

In Damián Ortega’s installation Nine Types of Terrain (2007) this alchemical process is enacted over and over, filmed on 16 mm film and projected simultaneously by a squadron of nine whirring projectors. Each short film loop shows a different formation of clay house bricks standing on end in a nondescript patch of waste ground and being promptly nudged by a (usually) unseen hand to topple in brisk succession. In some instances the bricks are placed in lines snaking across the ground; in others, more complex formations involve sharp zigzags or spreading forks. In one a line of falling bricks slowly ascends a slope, like a weary figure trudging up a hillside.

That Ortega’s bricks conjure an image of phalanxes of human figures is, of course, not accidental. The nine types of terrain referred to in the work’s title correspond, in fact, to the nine possible types of battlefield that the sixth-century BC Chinese general Sun Tzu identified in his book The Art of War. Tzu’s guide to warfare is widely viewed as the definitive work on military strategy and is said to have influenced warriors such as Napoleon Bonaparte, Joseph Stalin, the Vietcong and the commanders of Operation Desert Storm. It is also frequently quoted in modern corporate strategy, as well as sports psychology, legal debates and even guides to romance and seduction techniques.

In the light of this reference Ortega’s configurations of bricks suddenly stand in for troops or buildings; by falling, they surrender to the hand of the artist knocking them down. However, they never quite connect with the reality of the violence to which they allude. They are as remote from the terror of bodies captured, shot or shelled, or buildings bombed or overrun, as were the table-top maps of Europe on which World War I generals pushed around miniature armies from the relative safety and comfort of their headquarters. The disjuncture between what we are presented with and what it represents reveals the distance between theory and practice, between ‘best-laid plans’ and their often painfully messy execution.

Instead the actions are ostensibly harmless: satisfyingly quick, wryly comical and both visually and audibly appealing. The recurrent tinkle of nine sets of bricks falling over fills the gallery with a noise that is somehow ticklish and which, one imagines, would sound similar whether played forwards or backwards. In the same way that babies derive endless delight from the same action once they learn to predict its result (a dropped ball will always bounce on the floor, for example), so the repetition and inevitability of the process make Ortega’s projections all the more watchable. The same principle drives Peter Fischli and David Weiss’ video Der Lauf der Dinge (The Way Things Go, 1987), an earlier elaboration of the domino effect and an obvious reference for the work. If only such predictability could be counted on in acts of war or, for that matter, affairs of the heart.

In the exhibition’s press release Ortega summarizes the processes inherent in his approach: ‘Build and demolish. Appear and disappear. Do and undo as much as possible.’ These antithetical forces not only inform the cyclical structure of his work but in fact take place at the same time, both in Nine Types of Terrain and in another sculptural work shown in the upstairs gallery, Project for Social Housing (2007). In the case of the former, the work ‘appearing’ is the demolition of the balanced bricks; in the latter, five brick columns connecting the floor to the ceiling have been chipped away towards their centres so that they appear to be in the process of developing, like the conjunction of a stalactite with a stalagmite. Through the title of the work Ortega appends political significance to this process, the columns suggesting Neo-Classical pillars in the process of dissolving while the cavities of the exposed bricks present cells for a new model of communal living.

Despite floating these two softly spoken works on potentially tempestuous waters, Ortega never allows his works to drift into didacticism or provocation. Instead, his doing and undoing are a method of contemplation, a reflection on cause and effect and the grubby, imperfect continuum within which these notions exist. Perhaps surprisingly, Tzu was not a brutal warmonger; his philosophy held that real skill lies in resolving conflict without resorting to fighting, and, crucially, that the warrior’s most powerful weapon is his understanding of his enemy and the terrain on which he is doing battle.