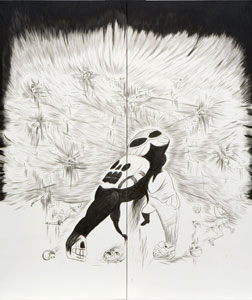 In a large warehouse annex belonging to Kurimanzutto were recently hung 28 diptych drawings by Daniel Guzmán, one of a generation of Mexican artists that includes Abraham Cruzvillegas, Damián Ortega, Pablo Vargas Lugo, Eduardo Abaroa, Melanie Smith and Gabriel Orozco. The show, ‘La Búsqueda del Ombligo’ (‘The Search for the Navel’) – a title implying the instinctual need for a point of origin, a centre we can always return to – constitutes a new body of work nearly two years in the making. The work references Mexican muralist José Clemente Orozco and his series ‘La Verdad’ (The Truth), a group of small-format drawings from 1945. Guzmán has often looked to Orozco’s work for clues to his formal questions about this artistic practice. In energetic large-format drawings such as Conejos (Rabbits), Tótem (Totem) and Soldado (Soldier) (all works 2005–7) Guzmán reinterprets, in a delirious yet coherent state of mind, such pre-Hispanic symbols as the pyramid, the moon and the rabbit, as well as caricaturized political figures – some of the elements that made up Orozco’s own iconography.

By synthesizing mythical and historical sources, gestures and figures, Guzmán is on one level paying homage to one of Mexico’s most provocative artists of the early 20th century. But his investigation does not end there; his black and white drawings create a distinct sense of vertigo that provides very few moments of tranquillity. There is an immediate contemporary parallel with Raymond Pettibon’s tense and personal relationship to history, or the influence of Mexico’s classic comic book series of the 1970s Lágrimas, Risas y Amor (Tears, Laughter and Love), El Payo and Kaliman – illustrations that satirized Mexico’s politicians. Kaliman was a legendary hero whose story was told via the radio and later in comic books. In Guzmán’s Fucking with My Head II Kaliman’s head, turbaned and with a letter K inscribed on it, is seen floating in space surrounded by cosmic matter and strange creatures. The moods and rhythms of Beat literature are another recurring feature of Guzmán’s works, which often quote William S. Burroughs (although in these drawings no direct texts appear). There is a raw speed and anxious imagination that oscillates between intimacy and the desire to expose oneself. Guzmán is clear when he talks about his own work: ‘What moves me more than fear is the violence around us, its arbitrariness, its meaningless existence; but there is another type of violence, more subtle, which destroys co-existence. It creates utter distrust, a lack of capacity to confront problems. This is the kind of reaction that’s in my work, not a reaction to fear as such because fear is the limit, it appears when you can’t find the way out, it paralyses you. Violence makes me evaluate what’s going on, it makes me respond.’

The physicality required to make this kind of work is significant, as though a force barely contained were seeping out onto the paper. The perspectival shifts playing on the face of Gene Simmons in It is My Body and on anonymous faces in others combines with lyrical line-work reminiscent of Art Nouveau’s organic forms in Tristessa (Sadness) ever-present are the dreamlike aspects of the everyday reality facing the artist: political disillusionment, failed love, solitude, confinement and the uses of language. This group of drawings possesses a melancholy that cannot help itself, a pathos verging on the ironic, seemingly sincere and then suddenly laughing in your face. As Guzmán says: ‘I look for anti-heroes, for strange characters that represent something important, but I always twist them a bit in order to mock them, although I also end up tripping myself.’ For some his iconography may be closely linked to the pop classics of his generation, to Kiss and The Beatles (John Lennon makes a star appearance in a drawing titled Jealous Guy) and to Mexican interpretations of Beatnik culture represented by writers such as José Agustín and Parménides García Saldaña.

Nevertheless, Guzmán’s work – which also includes videos and installations – pointedly suggests, particularly in these more than two-dozen drawings, a hyperactive originality and an elastic, sensitive imagination. By deconstructing the wealth of images that surrounds him, Guzmán moves away from the artifices of Western civilization towards what lies within himself and is natural to all humans: the ongoing search for the powerful energies that permeate our existence.

Jessica Berlanga Taylor is a curator and art critic based in Mexico City. She is currently Chief Curator at Alumnos47 Foundation.