If you had the opportunity to display Henri Matisse’s La Dance (1931–2) would you put a wall in front of it? Christine Marcel and Emma Lavigne, the curators of ‘Danser sa vie’ (Dance Your Life), a thematic show exploring the relationship between art and dance from the 19th century to the present day, did just that. Although the wall served as a screen for Daria Martin’s film In the Palace (2000) at the entrance to the exhibition, it also prevented the audience from obtaining enough distance to view the whole of the Matisse. The first things I was confronted with were some pert breasts in Martin’s tableau vivant and, out of the corner of my eye, a person writhing on the floor (Tino Sehgal’s Instead of allowing some thing to rise up to your face dancing bruce and dan and other things, 2000). Peeking out from either side of the wall were fragments of Matisse’s figures, the rest of which was on view behind. So, what were the curators trying to say? Formally, Martin’s film is more live image than dance and – although he trained as a choreographer – Sehgal’s fusion of works by Dan Graham and Bruce Nauman sits firmly within his ongoing project of institutional critique. But Matisse’s love affair with dance is famed and this is one amazing painting: very few works of recent years, including these two, could ever stand up to it.

What followed, however, was an exhibition on an epic scale. Twenty-one thematic rooms containing painting, photography, sculpture, film and video arranged under three sub-themes: ‘Dance as Self Expression’, ‘Dance and Abstraction’ and ‘Dance as Performance’. The next room pitted Vaslav Nijinsky’s short piece of Dionysiac brilliance, L’Apres Midi d’un Faune (A Faun’s Afternoon, 1912), against Matthew Barney’s early film stills, ENVELOPA: Drawing Restraint 7 (1993), with the effect of making the latter appear humourlessly contrived. In the following rooms, the texture of different mediums worked well, as the sweeping ballroom dancers in paintings by Emile Nolde and Ernst Ludwig Kirchner were enhanced by the literal movement in films such as Lavinia Schulz and Walter Holdt’s Tobbogan Frau (Toboggan Woman, 1923). Mainly containing early-20th-century offerings, this first section of the show presented the idea of dance as a (fairly hedonistic) form of human expression.

‘Dance and Abstraction’ took us on a whistle-stop tour through the 20th century, encompassing Josephine Baker, Theo van Doesburg, Francis Picabia, Man Ray, Alexander Rodchenko and various Bauhaus offerings, as if the pages of a Modernist art history reader had been brought to life. This section put forward the idea that art and dance were fused through their burgeoning relationships to the mechanization of society and the changing political landscape. The idea of movement stripped to its essential components was also emphasized by the inclusion of two recent works: Olafur Eliasson’s Movement Microscope (2011) and William Forsythe’s Solo (1997). Both dealt with repetitive motion: Eliasson’s through slowed down ‘hip-hop’ movements enacted by his students in his studio and Forsythe’s through repeated gestures accompanied by a verbal explanation. As concepts these are interesting enough, yet the heavy emphasis placed on movement as a form of deconstructed labour felt too literal. 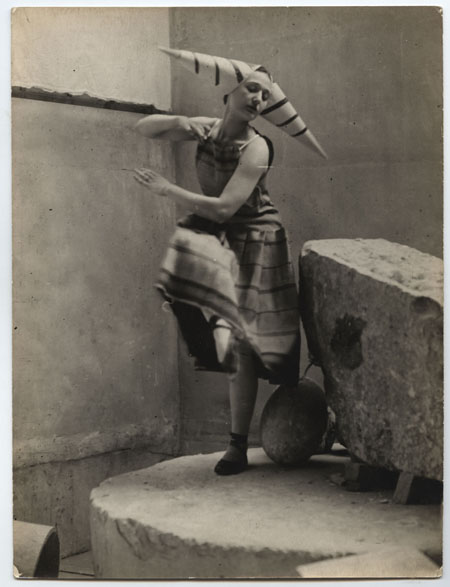 ‘Dance as Performance’ focused mainly on works from the 1950s and ’60s, positing a pleasing take on the artist’s body as ‘dancer’: Jackson Pollock’s performed machismo in Hans Namuth’s 1950 film was positioned against Carolee Schneemann’s body as tool (in a photo by Henrik Gaard, 1973/6); Kazuo Shiraga’s cathartic romp in the mud (Challenging Mud, 1955) was accompanied by his and Pollock’s paintings. The following rooms hopped, skipped and jumped through a huge range of works that included Allan Kaprow’s 18 Happenings in 6 parts (1959 – dance as every day action), Hélio Oiticica’s Parangolés (1964 –79 – wearable sculptural capes), Anna Halprin’s iconic Paper Dance, Parades and Changes (1965 – dance likened to sculpture) and Merce Cunningham’s collaborative output, followed by a mammoth section on the Judson Dance Theater. In contrast to the earlier, more illustrative, sections, this section successfully confused the binary reading of visual art as dance and vice versa.

Ultimately, ‘Danser sa vie’ triggered the question: why make such a broad exhibition? Would you curate a painting show that tried to cover painting for the last hundred years? Many recent surveys of performance (‘100 Years’, MoMA PS1, New York, 2009), art and dance (‘Move: Choreographing You’, Hayward Gallery, London), art and television (‘Are You Ready for TV?’, MACBA, Barcelona, and ‘Changing Channels’, MUMOK, Vienna, both 2010), and art and activism (‘Living As Form’, Creative Time, New York, 2011) have essentially been vehicles for sprawling ‘show and tells’ across a broad chronological spectrum. It’s fascinating to see so much work, but is this sheer assembly enough, or should we expect more editing and author­ship, creating guidance through these complex areas? ‘Danser sa vie’ would have been more effective as a series of different shows exploring the multitude of ideas present here. More a rollercoaster ride than a dance, at the end I felt discombobulated, overwhelmed and excited, but ultimately relieved it was over.