Tracing the constellation of performances across Naples and Stromboli in this year’s Volcano Extravaganza, directed by Eddie Peake

There’s a dark energy to Stromboli, more than one attendee of the Volcano Extravaganza told me. I was part of the audience in Naples anticipating the first performances of the Fiorucci Art Trust’s seventh edition of the annual contemporary art festival. Instead of being situated exclusively on the Aeolian island of Stromboli as usual, this Extravaganza, titled I Polpi (The Octopuses) and directed by British artist Eddie Peake with curator Milovan Farronato, was a 96-hour-long journey across a ‘constellation’ of destinations; its tentacles joining Naples and the volcanic island of Stromboli together by an intervening ferry ride.

Feeling the blazing Neapolitan summer sun, it was hard to take any forewarnings of mystical malevolence seriously. While most of Stromboli is made up of an active volcano that’s been rumbling continuously for the past 2,000 years, major eruptions are rare. Thoughts turning to bathing in the sparkling Tyrrhenian sea, I dismissed the warnings and concentrated instead on the prospect of the events in the days to come.

In contrast to previous editions of the Extravaganza which have always included a number of participating artists, I Polpi served as a retrospective of Peake’s practice. Three works, Gli Animali (The Animals, a new iteration of Touch, 2012), Fox (created with Sam Hacking, 2005), and Megaphone Duet (2016) are reprisals. The main piece To Corpse, a new series of dance performances, would take place over two days and one night in five different locations. As a finale, an exhibition of Peake’s murals would close the festival at the trust’s village house on Stromboli.

Before seeing Gli Animali, on Thursday afternoon my Italian friend and I stopped at the Museo Archeologico Nazionale di Napoli, famous for its cache of Greek and Roman artefacts, and items recovered from the ruins of Pompeii, Herculaneum and other towns destroyed by the Vesuvian eruption in AD 79. After admiring the mosaics and frescoes, we happened upon the Gabinetto Segreto (Secret Cabinet), a collection of erotica from Pompeii and Herculaneum. An array of penises – sculpted, frescoed, in frieze, carved and as tintinnabulum (little hanging church bells) – greeted us along with naked dancing nymphs and scenes of copulation between minor deities and animals.

We walked from the historic centre up to Salita San Raffaele to find the courtyard of Casa Morra, a crumbling 18th-century palazzo which is now a space for contemporary art owned by the Fondazione Morra. The museum visit proved a serendipitous prelude to Gli Animali as Peake often investigates eroticism and voyeurism in his work. In this first event local amateur football players participated in a friendly game of five-a-side wearing nothing but socks and trainers – a performance Peake first staged as a student at the Royal Academy of Arts in London. Before the game started I sat on steps behind one goal – my perch turned out to be directly in line with the backside of one of the goalkeepers. But the men played with such conviction that it didn’t take long to get past the nudity and focus on the game itself. (Being American, I didn’t quite follow. Apparently the result was a draw: 7-7.) Local residents peered through their windows to watch. (Two walls that comprised the courtyard were the backs of apartment buildings.) The families seemed to enjoy this pre-dinner spectacle, too, including a grandmother behind me who sat at her window watching the game intently. Naples was an appropriate site: its Roman descendants able to appreciate the combination of two forms of contemporary and ancient hero worship: football and the male nude.

Friday’s itinerary was full with three variations of To Corpse – its title comes from British theatre slang describing when actors break character and laugh. I’m not sure it applied here as no performer came close to laughing, but since each iteration took place in a new venue with different sound accompaniment, there seemed the possibility of deviation from the script. The five performances and sites were so varied that I had to watch closely the first few times to be sure the choreography was the same. Variation One took place in the regal interior courtyard of Naples’s Museo MADRE. The dancers, Valeria D’Antonio, Emma Fisher, Sara Lupoli, Kieram Corrin Mitchell and Francesco Russo wore all white, from their unitards down to their tennis shoes. Bright and effervescent, the mood matched, aided by Actress’s (Darren Cunningham) clubby electronic production. The sequence started out slow and sure, with articulated steps and Peake’s signature strong-armed shapes. After rolling on the ground and into the splits, the dancers stood up to reveal streaks of dirt on their white legs. At points they cried ‘Huh! Huh! Huh!’ in unison, each placing a hand over their crotches, thrusting their pelvises. The dance finished as they exited the courtyard together.

It was a hot climb up stairs to Le Scalze, Chiesa di San Giuseppe a Pontecorvo, the venue of the next variation. Wearing somber black, the dancers moved across the tiled floor of this emptied church. Gwilym Gold took full advantage of the acoustics – his organ-like music and elegiac vocals soaring to the vaulted heights. Mitchell skipped acrobatically around the others, seemingly about to take flight. By the end I felt lighter, too, buoyed by the spiritual production. Soon after we gathered for Variation Three: a bus drove us nearly 20km west of Naples to the otherworldly setting of the Solfatara volcano. As I circumnavigated the hotspots and steam to avoid the toxic fumes, the dancers emerged in fiery fuchsia costumes like licks of flames. Poet and writer Holly Pester provided dramatic spoken words: ‘With stripped out eye sockets / Our skulls shake sideways on / Sand.’ And indeed when the dancers lowered themselves to crawl or roll, it was on scorched earth.

Saturday afternoon the caravan of artists and art-lovers met at Naples’s Mergellina port to embark on the five-hour journey to Stromboli via a hydrofoil boat. Onboard entertainment was provided courtesy of Peake’s friends Francesca Del Sorbo, Xavi Llarch Font, Raffaela Naldi Rossano and Prem Sahib, who performed Fox. A tricky endeavour on a moving boat: four times during the journey a pair tried to switch outfits inside a fox costume without exposing themselves.

After docking at the Stromboli harbour I was keen to appraise the island. The palette at dusk was dark: beaches of black sand, the volcano looming in silhouette and the seawater tinged with hematite. Soon Peake arrived to perform Megaphone Duet with Fisher. He stood with a megaphone as she counted to eight with matching staccato movements. Intermittently Peake called out plaintive requests to which Fisher would reply ‘Fuck you, Eddie!’, and slap him. The duet ended when Fisher ran off with the megaphone.

Club Megà sits raised on a hill overlooking the sea; quite the European-styled discotheque. At half past midnight Variation Four of To Corpse commenced. Duo Evan Ifekoya and Victoria Sin turned sensual phrases to electronic beats. Fittingly, the five dancers wore only body paint and glitter. Just before sunrise, Fellini-esque, our group of revellers filed down the hillside path to the beach below. The sky was now slate gray and the sea silvery. Variation Five was performed naked to the silent dawn. The quintet danced the sequence, floorwork and all, on the rocky black sand. Natural, pure, primal, this version seemed to invoke a raging thunderstorm and gale-force winds that followed – the dark energy of Stromboli evident after all.

Melissa Pellico is a curator and art writer based in London. 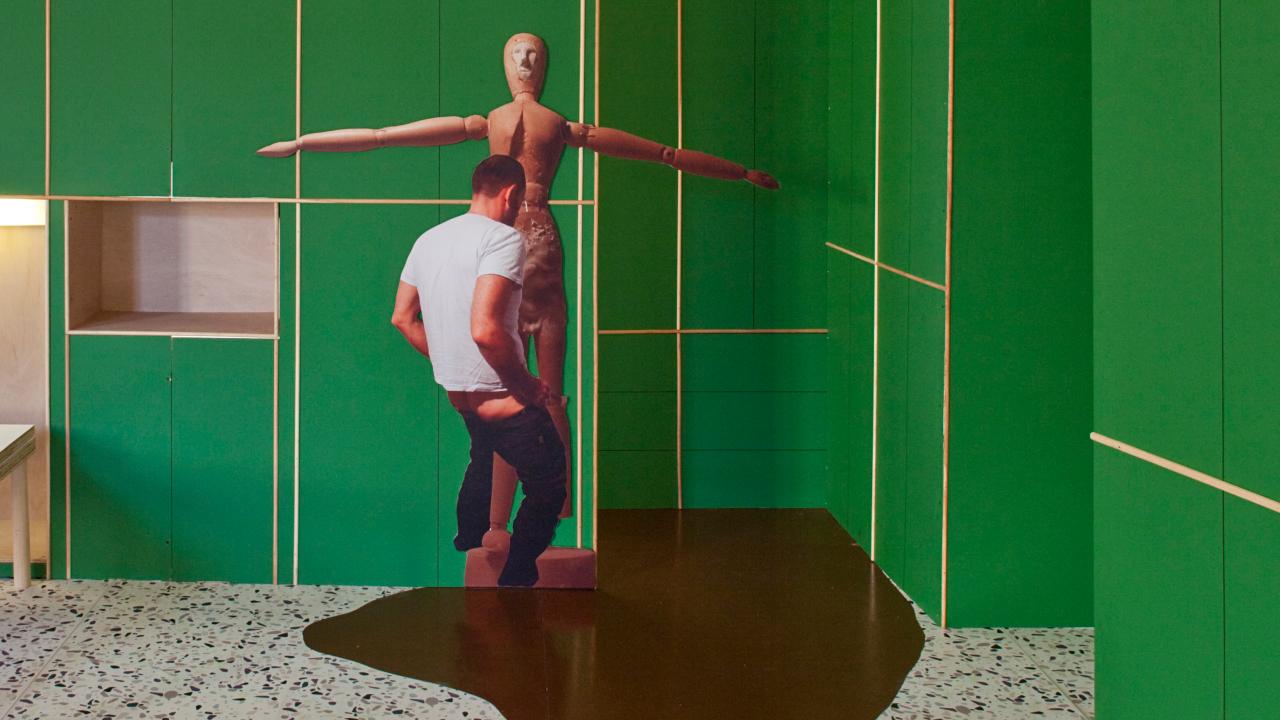 Critic's Guides
Neither, Nor: What to Expect From the Italian Pavilion of the 58th Venice Biennale