Regime change starts at home, accompanying the drone of the washing machine as you settle into the couch with a cup of tea. Among the rows of comfortable Georgian houses on Dublin’s south side signs are manifest of a quiet revolution afoot, its insurgence gently intimated, understated if not always subtle. Advocates of this quiet revolution enact pointedly impractical solutions to non-existent problems, their statements pronounced in introverted, self-conscious gestures. It’s as though at a tender young age these artists cracked open a fortune cookie to find the solemn slogans ‘The personal is political’ or ‘Another world is possible’ and took them to heart as the foundation of a philosophy of absurd humour and experiential exploration. From then on toys were disassembled and remade, surroundings rearranged and building tools put to all kinds of unintended use.

In a terraced town house on Dublin’s Waterloo Road artist David Beattie invited four of these artists into his home to show their work over four days. A photo on the front hall mantelpiece depicts David Sherry holding an arching, metre-long, bridge-like framework constructed with dozens of Starbucks’ wooden coffee stirrers and masking tape. Down the hallway in the laundry room Matt Calderwood’s short videos Tape and Gloss (both 2004) repeatedly extinguish the light from a bare bulb, wrapping it in electrical tape and dipping it in a can of black paint. The projected image of the bulb provides the only light in the room, inevitably abandoning us in complete darkness. You try to enter the sitting-room, instead bumping into the door from some unseen resistance. As you slide in sideways, a pair of white sneakers nailed to the floor block the way. The clock on the wall has six extra hands: the hour and minute hands of Ingo Gerken’s Waiting for the Right Moment (2007) are visible but concurrent with the angular ballet of the other hands, which tell unnameable times that we have not yet learnt to read. The boyish playfulness of the works is akin to building a fortress out of sofa cushions, but these reconfigurations are posing questions we may feel we’ve outgrown, questions that ask simply how we interact with and construct our surroundings. 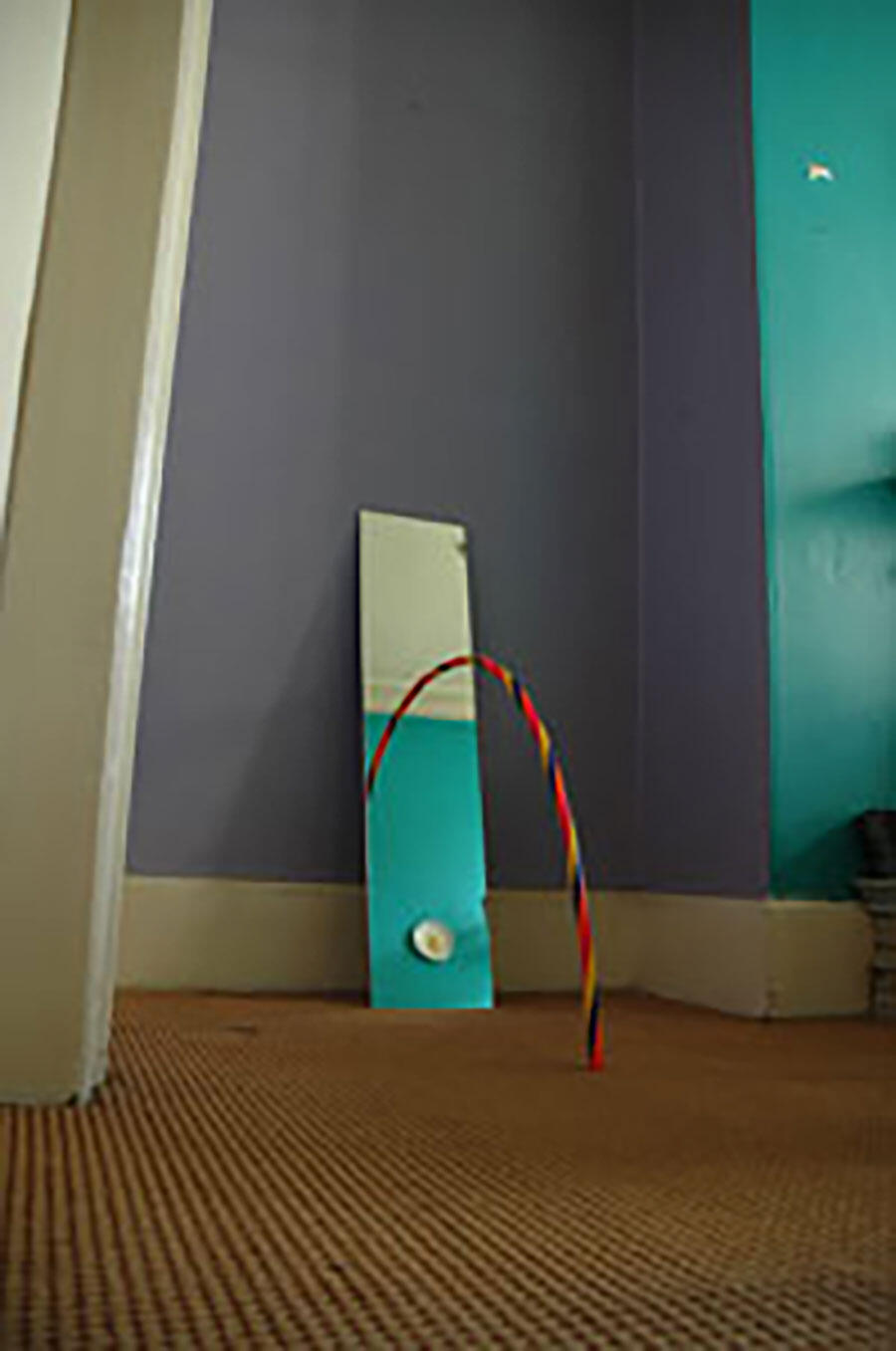 It was among the clutter and faded brown carpets that each work managed to find its own voice resonating with unaffected site-specificity, each taking on a different aspect of daily life, shifting it slightly to cause a more profound disorientation. Above a worn couch Gerken presented a reframing of his Sunset (Featuring Joseph Albers) (2003–6), photographed from the wall directly behind the viewer. Itself a perspectival intervention of Josef Albers’ Homage to the Square: Apparition (1959) imposed on a city landscape, its multiple layers entangle with the viewer’s point of view in a way that is temporally unstable but historically aware and immediately physical. Beattie’s Arc II (2007) used a similar tromp l’oeil effect, involving simply a quarter of a brightly striped hula-hoop leaning against a mirror. Making clever use of the fact that the dining-room’s facing walls were clashing shades of jade and lavender, the hoop finished its rainbow curve in what seemed to be another room, the work’s yearning idealism tempered by its humble composition. Dennis McNulty’s literally bookish Trajectory/A Pattern Language (2007) suspended a copy of the influential architectural text A Pattern Language (1977) by Christopher Alexander from a protruding shelf balanced in place by a set of homemaker magazines such as Home for Irish Interiors. A set of angled mirrors brings both you and the book’s sleeve notes into the work alongside the book’s point-by-point solutions to theoretical space, opened here, appropriately enough, to a short treatise on the benefits of open shelving. McNulty situated the book’s claims so as to question the validity of its own propositions in action, perhaps echoing the miscarried social aspirations of urbanists such as Le Corbusier and Lewis Mumford.

The tone of a protester’s oppositional stance hung over ‘Homemade’, Beattie’s invitation being part of a wider series of exhibitions revolving around domesticity. The temporary occupation of an art project in the private domain risks evoking false opposition to the gallery space, harping on about the rupture of the public into the private as though it was a well-kept secret that people might habitually relay between the two. For the artists taking part, however, such an indistinction was taken for granted. On the stairway landing, Sherry’s video work Brushing Teeth (2004) doesn’t dwell on the strange fact that he has hired a friendly Glaswegian mother to come to his house every morning to brush his teeth for him, but rather documents it as a platform for a different form of interaction as they chat (or, rather, she chats, while he grunts tiredly) about films, pubs, relationships and hip replacements. At one point she asks him, ‘So what made you become interested in the human side of things?’ Sherry’s response is cut off, but her honest, unassuming question echoes through the show with a casual revolutionary zeal.