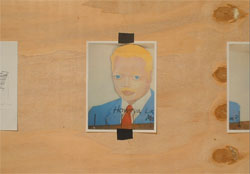 Imagine putting together the ideal exhibition, unconstrained by budgetary or space considerations, fragile and unmovable objects, finicky estates, reluctant collectors or uncooperative artists. Anyone who has ever walked through a favourite artist’s retrospective and detected ‘missing’ works has probably engaged in this exercise. We’re all terrific curators in our own minds, busily creating phantom check-lists with little thought of the real-world financial and logistical hurdles involved.

Triple Candie, a non-profit art space in Harlem, took this thought experiment seriously with its ‘unauthorized retrospective’ of David Hammons. After five years of unseccessful attempts to organize a Hammons exhibition, encountering resistance from both artist and collectors, co-directors Shelly Bancroft and Peter Nesbett decided to mount a show that included, as they proudly stated, ‘none of the artist’s actual work’. Instead, they presented photocopies and print-outs taken from existing catalogues, brochures and websites, mounted on letter-sized paper and fixed to the wall with pieces of broad black tape. It is a profound homage to – and very much in keeping with – Hammons’s own irreverent brand of Conceptualism. Hammons’ diverse production over the past 40 years is difficult to categorize, comprising performance, ephemeral site-specific installations, mixed-media sculptures and found object pieces. He is equal parts pioneering political artist, street performer and junk collector, and his witty, sometime scathing art has been widely influential. Who else would urinate on a Richard Serra sculpture and document it (Pissed Off, 1981)?

With 95 images from the last four decades, this conceptually tongue-in-cheek show was billed as the ‘largest assemblage of Hammons’ work ever, either in exhibition or book form’. In this it was a gift to those eager to see so much evidence of Hammons in one place. (His one monograph, Rousing the Rubble, is almost 15 years old.) For all its ‘outlaw’ pretences, the show stuck to a traditional chrono-logy, starting with Rabbi, an early 1960s’ silk screen, and ending with the 2004 performance Dak’art Sheep Raffle. Because of the exhibition’s breadth – impossible in a ‘real’ show – one could trace how such Hammons themes as racial stereotyping and the commodification of black identity have recurred and evolved over time.

Some of the works reproduced cleanly in the process of being copied or downloaded, while many were distorted to the point of illegibility, the grainy pixelation becoming an interesting visual corollary to the artist’s own legendary elusiveness. John Henry (1990), described in the check-list as an assemblage of stone, hair and steel, looked like nothing more than an abstract fuzzy black circle. The performances had no explanatory texts, and the images representing them were often enigmatically undecipherable. While true of so much documentation of live art, here the insufficiency of the photograph was intentionally pushed to breaking-point until the images became something else entirely – more like ghostly traces than documentation.

The copies were unevenly and misleadingly sized, so that a large ‘body print’ such as Injustice Case (1970), for example, was reduced to about three centimetres in height, while others occupied the full page. These arbitrary disparities, coupled with the flattening homogeneity of the page, produced an effect similar to seeing art in a book or slide lecture, unmoored from scale. In this the show’s explicit institutional critique commented not only on the gallery space or the hagiography of the retrospective but also on the support structures of canonization and pedagogy, such as the art history classroom, the monograph or the art magazine feature, which are institutions in themselves deserving interrogation. More than anything, the images on the walls look like the ‘figures’ section of any graduate art seminar paper, with their appendices of crappy photocopies. Indeed, the not-for-sale ‘exhibition catalogue’ consisted of copies of all the images of the show (one further generation lost), bound at a copy shop like a hastily assembled course reader, complete with crooked pages, hand-scrawled captions, smudged images and illegible text. A blank space at the end of the final wall implied Hammons’ continued production. The open question of his current status seemed in dialogue with the one sculpture in the show, a large floor assemblage of wood, metal strips and painted canvas roped off with a Magritte-esque placard declaring, ‘This is not an artwork by David Hammons’. Was it perhaps by Hammons, but not an art work?

Many have speculated that Hammons himself engineered this show; it would be entirely in keeping with his sly use of appropriation and investigations of institutional exclusion. The official word is that the artist, who lives and works in Harlem, had no comment. Yet even that silence fuelled swirling rumours about his complicity, precisely proving the exhibition’s point about the power of the retrospective. We look for evidence of the artist’s hand, even when his involvement is repeatedly disavowed. Whether a sincere homage or an inside joke, the ‘unauthorized retrospective’ functioned on several different levels, as an academic exercise in institutional critique and as an evocative illustration of aura and lack. One promise of a survey is that of special, if fugitive, access to the totality of an artist’s work. Ultimately, there was something melancholy about all these copies. They tell us something quite potent about the effect of presence and absence. They remind us that what lies behind appropriation is the realm of desire.