David Lamelas's Works Have a Life of Their Own

A blue enameled street sign similar to those found in Paris greets you as you enter this discombobulating exhibition of work by the Argentinian artist David Lamelas. It is one of a pair, reading ‘Buenos Aires no existe, Buenos Aires n’existe pas’ (2009). This refers to a statement Marcel Duchamp made during his 1918–19 stay in the Argentine capital: although it may resemble Paris, Buenos Aires ‘does not exist’. Lamelas’s signs are a playful response to the trickster, and underneath the first we find a framed letter written by him with this reassuring message: ‘Mon Cher Marcel Duchamp, BUENOS AIRES existe.’ But Lamelas has larger, more cosmic doubts on display here; he has gone on record as saying that time itself ‘doesn’t exist’.

Lamelas’s spooky manipulations of the temporal cast us into a wilderness of mirrors akin to those of his literary countryman Adolfo Bioy Casares. For Lamelas, time might be imagined as a line of people, as in his performance piece Time (1970), in which one person tells the next the exact time in 60 second intervals. To create the quotidian series ‘Time as Activity’ (1969–ongoing) – three prints from which appear here – Lamelas photographs a city and labels each image with the time and place it was taken (‘Buenos Aires.16.53 and 6 seconds’). He’s telling us that this place will never be exactly the same again. With the simple click of a shutter, the artist takes a mere moment and turns it into a Duchampian readymade. 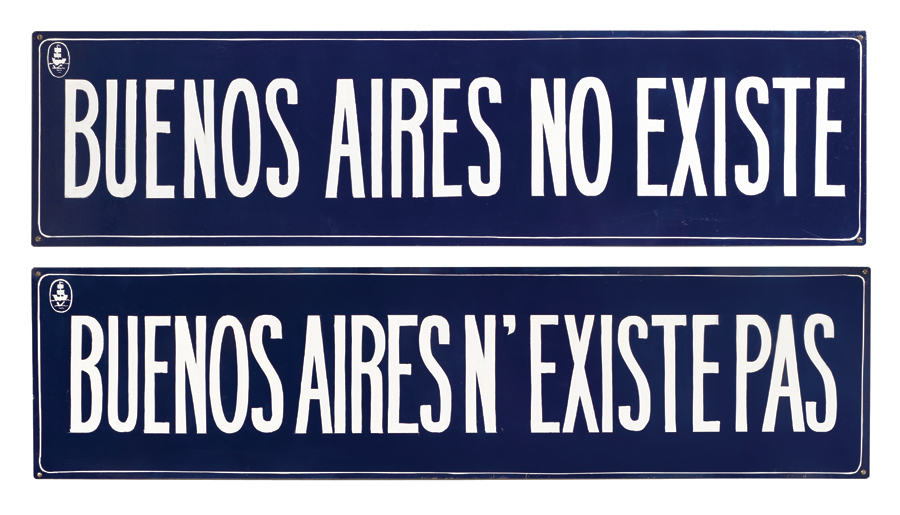 A further snaring of time occurs with ‘Antwerp–Brussels (People + Time)’ (1969), a series of photographs of art-world figures he met in Belgium, each again labelled with the exact time they were taken. We see Marcel Broodthaers crossing a road, Panamarenko in the middle of a street under a Christmas star. Given Lamelas’s ludic love of ambiguity and paradox it is amusing to discover that the folio was initially acquired as ‘documentation’ and only later ‘reclassified’ by museum authorities as a conceptual artwork.

There is much evidence here of Lamelas’s anticipatory clout, his seer-like pointing towards conceptualist futures. Looking at the dates of these works we ask incredulously – he did this when? Lamelas was ahead; he was early. And so with Rock Star (Character Appropriation) (1974) we see him in a sequence of shots pretending to be a guitarist in the style of someone like a lost Allman brother years before Cindy Sherman’s fictions. Similarly, notions of institutional critique are prefigured in earlier sculptural works such as ‘Falling Wall’ (1993–ongoing), in which proletarian beams of wood prop up a precariously tilting side of the pristine white cube.

Lamelas’s video works were also strikingly visionary, and often disconcertingly funny. Disappointingly, they are displayed here on one small monitor, with two chairs spaced some distance from the set; dialogue is difficult to hear. In A Study of Relationships Between Inner and Outer Space (1969) an interviewer asks Londoners their thoughts on the then-topical moon landings. The replies are delightfully sanguine; a schoolboy in cap talks of life on Mars; a longhaired hippy says he’s been there already.

The Dictator (1978) is likewise a scream. Lamelas himself plays the exiled Colonel Riccardo García Pérez (resplendent in shades, with a Zapata moustache and his black hair slicked back), who is being interviewed and blaming his overthrow on communism. Pérez feels safe in Hollywood because ‘politics is so irrelevant’ there. The work is again prophetic, presaging the comedic career of Chris Morris and his spoof-news show The Day Today (1994). Lamelas is a wise tactician and his continually pertinent interrogations of reality are some of the most gloriously unruly since Duchamp’s.

‘David Lamelas: A Life of Their Own’ is on view Museo de Arte Latinoamericano de Buenos Aires until 11 June.

John Quin is a writer based in Brighton, UK, and Berlin, Germany.