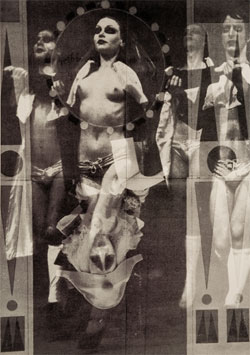 ‘The Enlightenment has always aimed at liberating men from fear and establishing their sovereignty. Yet the fully enlightened earth radiates disaster triumphant.’ These are the fearsome words that begin Max Horkheimer and Theodor Adorno’s The Dialectic of Enlightenment (1944), written in exile during the darkest days of World War II. They describe science’s attack on superstition, magic, animism and ritual – they call it ‘the disenchantment of the world’ – and identify the debased return of these phenomena in the forms of Hollywood and Nazism. Reason, in this formulation, is its own worst enemy: ‘The myths which fell victim to the Enlightenment’, they argue, ‘were its own products.’

The gallery was divided by a plywood wall that split Noonan’s work into two approaches distinct in scale, subject matter, medium and technique; a squat bronze owl – a familiar totem in Noonan’s work – perched in the front space and served as an axis between the two collections. The first room showed four screen prints, large-scale composite images that superimposed multiple photographs to create a single picture. These were rendered with a fine dot matrix that hinted at their origins in magazine or newspaper reproductions. Each presented costumed figures in self-conscious, theatrical poses overlaid with graphic elements: harlequins, reversed words and ornamental patterns subsumed within photographic tableaux.

Where some of Noonan’s earlier work could be called primly Gothic, these works were genuinely frightening. Unified and striking when seen from a distance, the pictures unravelled close up, the constituent dots becoming a vibrating, eye-popping optical pattern. Inverted patterned fragments floated up out of the background murk: the floral print of a silk robe in one image, a chain-link fence in the next. The pictures came with a host of associations – Italian and Japanese horror films, Alfred Jarry’s Ubu Roi (1896), the over-scaled creatures of Peter Schumann’s Bread and Puppet Theater, illuminated medieval manuscripts, Jack Smith’s Flaming Creatures (1981), Scary Monsters-era orientalist David Bowie – and yet resembled or referenced none of them exactly.

Magazine-scale paper collages comprised the second collection. Where the first set of works flaunted the artifice of their constructed space, here the pictures presented a more subtle and believable mise-en-scène. Noonan merely cropped existing pictures or pasted figures from one scene against the backdrop of another. This group of images depicted scenes from an experimental, quasi-religious art-therapy programme for children in Eastern Europe in the 1970s. In several collages the kids’ creativity seems to have run amok: obscure pictures dangle from clothes lines and crowd in from every angle; chairs and baby carriages have been disassembled into junk sculptures; shredded and folded newspaper creations cover the floor, creating a immense battlefield. In others, men who appear both sensitive and sinister, with scraggly beards and sweaters, watch over the students’ activities. The teachers’ hovering, somewhat demonic-looking gaze gives the students’ scribbles and ideograms a troubling, freakish air. Is this where behavioural science and radical education theory have brought us? Still, there was something alluring about these scenes, something appealing about the evident intensity of the students’ explorations. Relegated as it was to a remote and relatively inaccessible past, it was possible to read this classroom cult as somewhat innocent: Viennese Actionism without the profanity or gore.

While the pictures were constructed piecemeal from found images, Noonan’s supporting structures were insistently modular. Each print was silk-screened on interlocking rectangles of laminated plywood; the shiny black paper used to matte the collages was itself meticulously cut from magazines, making it a carefully constructed collage of negative spaces; the plywood wall that divided the room was an art work in its own right, what Rosalind Krauss might call an ‘axiomatic structure’. Ritualistic obsession – the idea that every piece of the ensemble is necessarily freighted with magical meaning – co-existed with the reflexive impulse to mark each element as constructed, artificial and exchangeable in nature. Repressed in the regime of reason, in Noonan’s work ritual returns as an image, both thrilling and frightening, of a time when different rules applied.