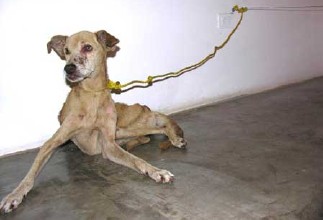 The art world has fielded a few examples of ‘dying’ as art this past year: there were Adel Abdessemed’s video accounts of a sheep, a horse, an ox, a pig, a goat, and a doe being bludgeoned to death with a sledgehammer; Guillermo Habacuc Vargas tied up a starving dog in a gallery; and for those on the Pro-Life side of the abortion debate, there was Aliza Shvarts, an undergraduate at Yale, who intended to exhibit her own blood from a series of self-induced miscarriages (until the university stepped in asking her to admit it was a hoax). All three artists aroused the predictable hue and cry – disturbed citizens were everywhere to be found, animal rights groups targeted Abdessemed and Vargas, while Yale sought to temper Shvarts. Helaine Klasky, a university spokeswoman, drew a discerning line between art and reality saying: ‘[Shvarts] is an artist and has the right to express herself through performance art. Had these acts been real, they would have violated basic ethical standards and raised serious mental and physical health concerns.’ (Had they been real? Shvarts swears that her miscarriages were no creative fictions, but never mind that he-said-she-said game.)

Arthur Danto’s detector for sorting art from reality – ‘The question is not whether it is a good work of art or bad, but how is it art at all?’ (‘The Last Work of Art: Artworks and Real Things’) – has served as a reliable compass within the no man’s land between artistic creation and humdrum reality. But that compass begins to spin when dying is untied from life by being presented as art – it’s quite different from distinguishing a snow shovel from a ready-made. Perhaps the time has come for more prosaic questions of accountability: what do Abdessemed, Vargas and Shvarts claim for turning dying into art, and how will they conscientiously bear it out?

We have been here before: in 1977 Tom Otterness adopted a dog and summarily shot it at point-blank range (the sole subject of his unambiguously titled Shot Dog Film). Last year Otterness tried to put the affair behind him with a heart-felt apology: ‘Thirty years ago, when I was 25 years old, I made a film in which I shot a dog. It was an indefensible act that I am deeply sorry for.’ Aligning his callousness with youthful indulgence, Otterness seems to have come to terms with his film as being more reality than art (the puppy could only have agreed). Does this pass for accountability? After a 17-second video was posted on YouTube last March showing two US Marines tossing a puppy off a cliff, animal-rights groups and many others expected an immediate explanation. Lance Corporal David Motari, who threw the puppy off the cliff, tried his hand at absolution saying, ‘Usually what happens is we shoot them. I was being ‘creative’ that day and decided to throw the dog instead.’ Following an investigation the Marine Corps discharged Motari. Where does the difference between Otterness and Motari lie? Well, according to Motari’s explanation, Otterness should receive extra demerits for lacking creativity (though cliffs are admittedly in short supply in Manhattan). The difference is that art world precincts carry on as if they are responsibility-free zones, addicted to avant-garde sweet-spots tainted by divine arrogance. For example, when threats and public outrage forced the San Francisco Art Institute to close Abdessemed’s exhibition, ‘Don’t Trust Me’, SFAI’s President Chris Bratton rationalized an excuse via the press release: ‘The artist participated in an already-existing circuit of food production in a rural community in Mexico. The animals were raised for food, purchased, and professionally slaughtered. In fact, what causes the controversy is that Abdessemed, an artist, entered this exchange, filmed it, and exhibited it.’ This argument is off-kilter: is an artist no more than an uncritical instrument for channeling reality? Is this innocent reportage somehow freed of ethical responsibility?

Was Abdessemed engaged in some form of anthropological field work? Maybe some audience members watched with vague alarm, but judging from the public indignation and righteous anger expressed by The Animal Liberation Front (ALF), In Defense of Animals (IDA), and People for the Ethical Treatment of Animals (PETA) – all named in Bratton’s press release – none were shocked, they simply wanted to know what end Abdessemed’s videos served. Animals are exploited by humankind every day; some are clobbered to death for dinner, while others are injected with cancer tumors as researchers look for a cure. The question is, do the means justify the ends? If you’re hungry or dying of cancer, traditionally the answer has been go ahead. Is art exempt from the same questions of accountability and responsibility cancer researchers and others live up to? Abdessemed and the San Francisco Art Institute should have accounted for the measurable effects these videos supposedly promised. But they didn’t, or couldn’t. The art world has not traveled far from the point when Robert Morris closed his 1970 solo exhibition at the Whitney Museum of American Art to protest the Vietnam War. Imagine the scene. In the Oval Office Chief of Staff H.R. Haldeman delicately approaches Richard Nixon:

Nixon: Morris is a son-of-a-bitch. I don’t need this now. What are our contingency plans? We knew this was a possibility. Is there any chance he’ll reconsider and re-open the exhibition? Get him on the phone!

Haldeman: I knew you would want to talk with him. He’s on line two Mr. President.

Morris is one of the most astute and gifted artists of the last half-century; what realistic expectation could he have harbored that slamming shut the Whitney’s doors would resound with measurable effect inside the corridors of power? And what lessons did Abdessemed carry away from that? None.

For his widely reviled exhibition, Guillermo Habacuc Vargas sent some street children to catch a stray dog he then named Natividad. Vargas tethered him, without food or water, inside a gallery in Managua, Nicaragua, but within sight of hundreds of dog biscuits glued to a gallery wall spelling out the words ‘Eres Lo Que Lees’ (You Are What You Read). According to the Guardian, Vargas claimed he wanted ‘to test the public’s reaction, and insisted none of the exhibition visitors intervened to stop the animal’s suffering.’ Protests and petitions followed. When word circulated that Natividad had died in the exhibition, death threats arrived though Vargas then claimed it had all been a hoax. This deception, Vargas said, was ‘to illustrate a point […] tens of thousands of stray dogs starve and die of illness each year in the streets and no one pays them a second thought.’ Is there a cause more naïve than this in a country where 68% live in poverty – 27% in extreme poverty – and the average annual income is US$326.20 per person? Were that not enough realism, according to the World Society for the Protection of Animals, of the 500 million dogs in the world, approximately 75% are strays. Vargas says ‘starvation and disease’ and we shrug because it takes no great imagination to see how little room there is for animals in the poverty equation when there are babies to feed. As a postscript to this pathetic stunt, Natividad was released to die on the streets, without Vargas delivering saving grace to the star of his show. What is this if not the gratuitous stoking of the old avant-gardist potbelly that burns desire with distrust; morbid curiosity on the one hand, and outrage on the other? It is a dead-ender’s game.

The real world teaches real lessons where dying is concerned. Suffering from agitation and psychosis, Esmin Elizabeth Green was admitted involuntarily on 1 June 2008 to New York’s Kings County Hospital Center, and placed in the waiting room of the psychiatric emergency facility. CCTV reveals that, after waiting nearly 24 hours, Green collapsed on the floor where she remained for about an hour, until she died. Half an hour after she collapsed the video shows a security guard walk into the waiting room, look at her, and walk away. Later in the footage, a member of hospital staff can be seen nudging Green with her foot before leaving. Throughout the entire affair others in the waiting room glance over but do no more. Although this was widely reported, coverage was nothing compared to the frenzied blogging over Natividad. What the coverage accomplished was the accountability the art world should be tuned in to: Kings County Hospital has been taken to court, and offending members of staff fired – many of whom may be found criminally negligent or guilty of malpractice.

Abdessemed, Vargas and Shvarts produce melodramas by imposing simplicity on complexity; they are the groundlings Hamlet condemns as ‘capable of nothing but inexplicable dumb shows and noise.’ If the art world doesn’t know how to curb them without inviting accusations of censorship, the real world knows exactly what to do with them. If not scraps for the 24-hour news cycle, they provided pulp for blog-causes, while, in Shvarts’ case, controversy was turned quickly into commodity. The online trinket company Onch has created the ‘Aliza Shvarts’ pendant. ‘Onch’, apparently the jewelry-artist responsible for the design, coos: “After reading the story about artist Aliza Shvarts, i was so inspired, i made a piece named after her. Aliza is a Yale art student that has created quite a controversy in the art world! i LOVE IT!’

$45.00 without the chain. Would we prefer censorship to this? I wonder. Or are we on the outskirts of seeing a backlash that will re-jig Danto to say: the question is indeed whether it is a good work of art or bad? I am not sure that the art world has the stomach for either, but maybe that’s good rather than bad. So we will wait for the next iteration of Showpeople 2.0, who like rock stars and reality TV shows realize that they must up the ante to insure audience share. We won’t have to wait long because it appears that Gregor Schneider has a doctor in Düsseldorf who will help him find a volunteer prepared to die in public for an upcoming exhibition. Esmin Elizabeth Green won’t even be a footnote and accountability will again be ignored. Stay tuned.