Across the Rhine from Cologne lies the district of Mülheim. In it is Keupstraße – a broad street populated by Turkish and Kurdish-owned businesses, famous for its household wares and kebab shops. In Café Paradies, they won’t let us pay for our tea and glasses of milk – they insist, out of what I assume is fondness for Peter Bach, the  resident of Mülheim who is accompanying me. Here, 13 years ago, on 9 June 2004, someone cycled up to the local barbershop and left a bike outside. In its basket was a homemade nail pipe bomb, which exploded and injured 22 people, including the barber’s brother in his shop. Police could not find the culprit. This, they said, was a criminal area, and the bombing must have something to do with rivalries and debts owed among the street’s inhabitants.

In 2011, two men on bicycles robbed a bank in Eisenach, a town 70 km southeast of Kassel and 150 km northeast of Frankfurt. Upon returning to the caravan they were living in, they set it on fire, and shot themselves in an apparent suicide pact. Beate Zschäpe, their alleged accomplice, who is currently standing trial in Munich, then returned to an apartment they shared in Zwickau and set it on fire. Nevertheless when police searched the apartment they found a gun, a video and newspaper clippings revealing that the bomb in Keupstraße and a spate of racist murders throughout Germany since 2000 were the work of the a neo-Nazi group calling themselves the ‘Nationalsozialistischer Untergrund’ (National Socialist Underground – NSU). In 2011, the Kurdish owner of Café Paradies came forward to say that his hearing had been badly damaged in the explosion and at last to claim the beginnings of a kind of compensation.

Justice has been slow to trickle down. There is an ongoing dispute about the site of the proposed memorial for the Keupstraße bombing, which has been designed as a space for the community, replete with commemorative wall installations. The developer who owns the chosen spot wants to build a five-storey apartment building there instead, trammelling local residents’ long-ignored objections. Other endeavours have sought to make sense of what happened here: Nuran David Calis’s Die Lücke (The Gap, 2014) – on its 72nd run in the local playhouse – broaches Keupstraße’s fraught terrain and begins with a tour of the street that actively involves audiences in its story; Der Kuaför aus der Keupstraße (The Barber of Keupstraße) records these events for a wider public, and an organization ‘Keupstraße ist überall’ (Keupstraße is everywhere) has been established by activists in Mülheim to defend and empower their community, acting in concert with other anti-racist organizations across the country. Inscribing the bombing in public memory, these activities put down a marker as they begin the work of moving forward.

Cologne’s Akademie der Künste der Welt (The Academy of the Arts of the World) recently co-hosted a dramatic 5-day ‘tribunal’ ('Unravelling the NSU Complex'), where public figures who enabled these crimes were symbolically ‘indicted’. Those affected by the NSU’s assaults came together to construct a shared justice – participating in workshops, performances, and the trial itself, before finally visiting Keupstraße with portraits of the NSU’s victims. Numerous events within the academy’s programme plough similar terrain. Artist Achim Lengerer’s 'Soundtracks on the Radical Left', for instance, traces an interwoven history: focusing on a wildcat strike that took place at the local Ford factory in Cologne in 1973 sparked by the sacking of 300 Turkish workers for returning to work late from holiday (the workers said they had to return to Turkey to tend to their farms and see their families). A group of about a thousand Turkish workers demanded a pay rise (‘1DM Mehr Für Alle!’) to match their white German counterparts as well as the improvement of their working conditions. These men, primarily from Anatolia, had been brought into the country as ‘Gastarbeiters’ – guest workers, cheap labour – to fulfil the demands of the German economy in the 1960s, and then return home. Lengerer, who intends to catalogue records of the strike online as a form of public memory, assembled clippings and video footage; voices clamoured from corners of the dark while Cologners breathed in snippets of their history.

Sitting in conversation with Lengerer was Mitat Özdemir – a former social worker at Ford, a resident of Mülheim and one of the brains behind the ‘Keupstraße ist überall’ initiative. Though many said that the strike of ’73 was short-lived and achieved nothing, Özdemir said that after the strike, migrants felt more at home in Germany. Also present was Peter Bach, who had joined Ford in the ’70s as part of a Communist cell to politicize workers, and who is also part of ‘Keupstraße ist überall’. Years later, returning to Ford as part of a theatre group with the play, Fordlandia, Bach met men who had worked their way up the ranks. ‘Your strike is unforgotten, and was the grounds for our development,’ they told him.

The Academy of the Arts of the World was established in 2012 by the city council wanting to revive Cologne’s former cultural glamour which had been diminishing since its heyday as an art nexus in the ’60s, ’70s and ’80s and Berlin’s ascendancy since the fall of the wall. Conceived as a bastion of Cologne’s openness and heft, 24 high-profile members from a range of artistic disciplines were selected by the city council to constitute the academy and lead its programme. After stumbling for some time, in 2015, they elected one of their number to become its artistic director, and Ekaterina Degot, along with fellow member David Riff, has been steadily growing the institution into a far more searching and radical body. ‘When I came on board we had to deal not just with diversity – because diversity is a white word – but ... with the reasons for inequality. And those reasons are different: one of them is colonialism; another, here, is the history of 'Gastarbeiters' and migration,’ she tells me. It is clear that she has ruffled feathers in Cologne and local media repeatedly state that the Academy has not yet managed to ‘arrive’. This was no doubt compounded by Degot’s decision after the Silvestersnacht sexual assaults of New Year’s Eve 2015 – from which a toxic, essentializing discourse emerged – to criticize the parochialism and ‘racially based division between 'us' and 'them'’ in a letter published by many of Cologne’s public figures.

Interrogating what they term ‘mass experience,’ the Academy’s disposition has been one of disrupting received analyses through the prism of ‘art as some sort of public statement,’ in Degot’s words. The Academy’s recent exhibition, ‘Enigmatic Majorities,’ for instance, asks about the people behind various late populist surges. Seven installations from many corners of the world explore these new divisions in their given contexts: Cristina Lucas’s dark, kitsch video sequel to Delacroix’s ‘Liberty Leading the People’ sees Lady Liberty shot in the back in the pitch of revolution. The discursive, public-political nature of these events and works typifies ‘Pluriversale’, the academy’s programme series which began in October 2014 – where visual art serves as a background to a delineated outlook and a vigorous, intellectual orchestration. The sixth in their series, running from April till July, was grouped together under the banner of ‘The Old Left and The New Right,’ and this autumn their seventh – ‘Stealing from the West’ – will address issues of ‘perverse decolonization’ – where weak spots in the politics of identity have allowed for the rise of empowered white victimhoods. ‘Pluriversale’, Degot tells me, riffs on the ‘biennale' format, but instead of ‘a cluster of individual art works… we take this structure and transform her,’ ripping open a traditional emphasis on spatial relationships between individual units to reveal a richer series of interrelated stories. Pluriversality is a concept developed by semiotician Walter Mignolo to challenge the ‘logic of coloniality’ at the root of Western universalism, drawing on Mexico's Zapatistas’ iconography of ‘a world in which all worlds can fit’ (‘un mundo donde quepan todos los mundos’).

‘Pluriversale VI’ concluded with a talk by writer Arun Kundnani in Cologne’s pristine Christuskirche, and a performance co-produced with documenta – Deproduction – by Terre Thaemlitz that presented a ‘a cultural defense for those who choose not to reproduce’. Kundnani’s talk placed the political uses of Islamophobia within the wider context of the war on terror, and began to defang the mythology that Nazism and its holocaust are unique in human history, aberrant reminders of the cruelty of which we humans are capable. Instead, he argued, what we encountered in the Third Reich was ‘colonialism coming home’. ‘Nazism needs to be set alongside Germany’s history of colonialism in Africa … the argument that the Shoah was a crime that cannot be analytically related to any other political crimes has strangely become an aspect of national identity in Germany,’ Kundnani said. As Bavaria pushes ahead with a partial burqa ban, and the CDU – bouncing back in the polls, but conscious of the threat from the Islamophobic Alternativ für Deutschland in the upcoming federal elections – embraces similar plans, there is plenty from these voices still to learn.

Main image: ‘Desearch Repartment’, 2015, Academy of the Arts of the World, Cologne

Phoebe is a writer and editor who has worked for WIRED UK and openDemocracy.

At Galerie Gisela Capitain, Cologne, the painter displays the medium's expansive possibilities with subtle disturbances in composition and colour 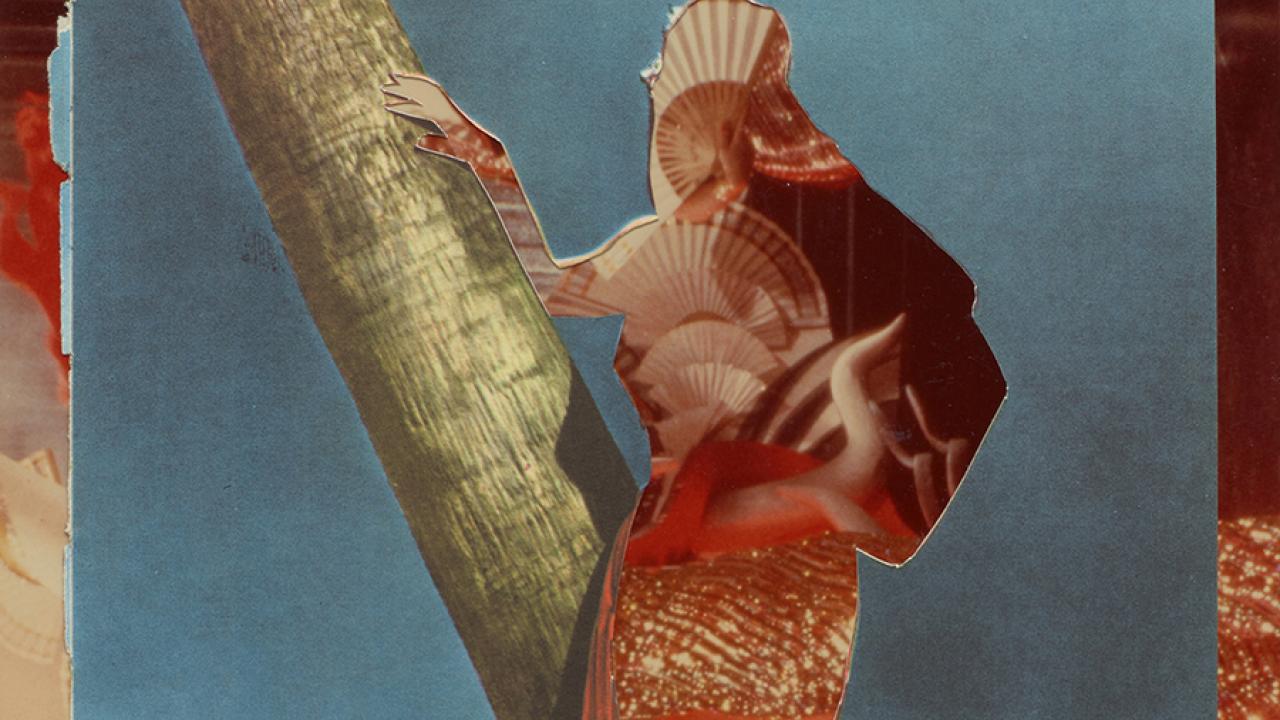 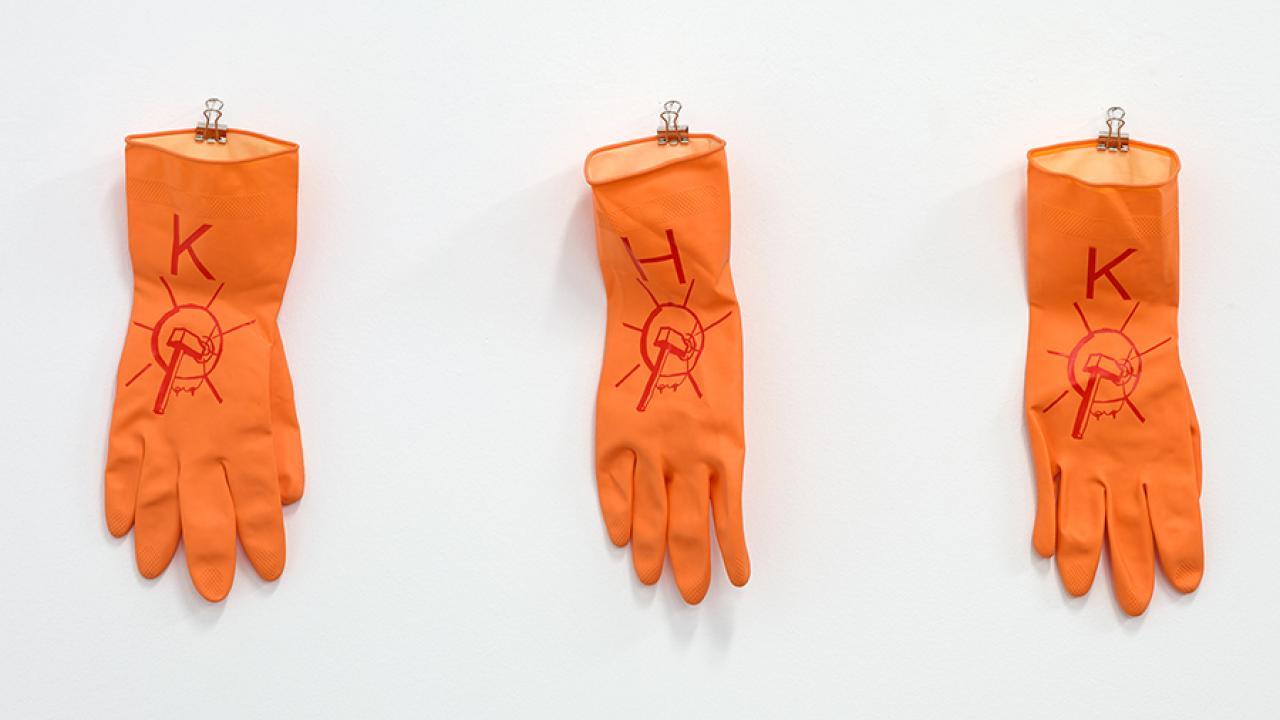 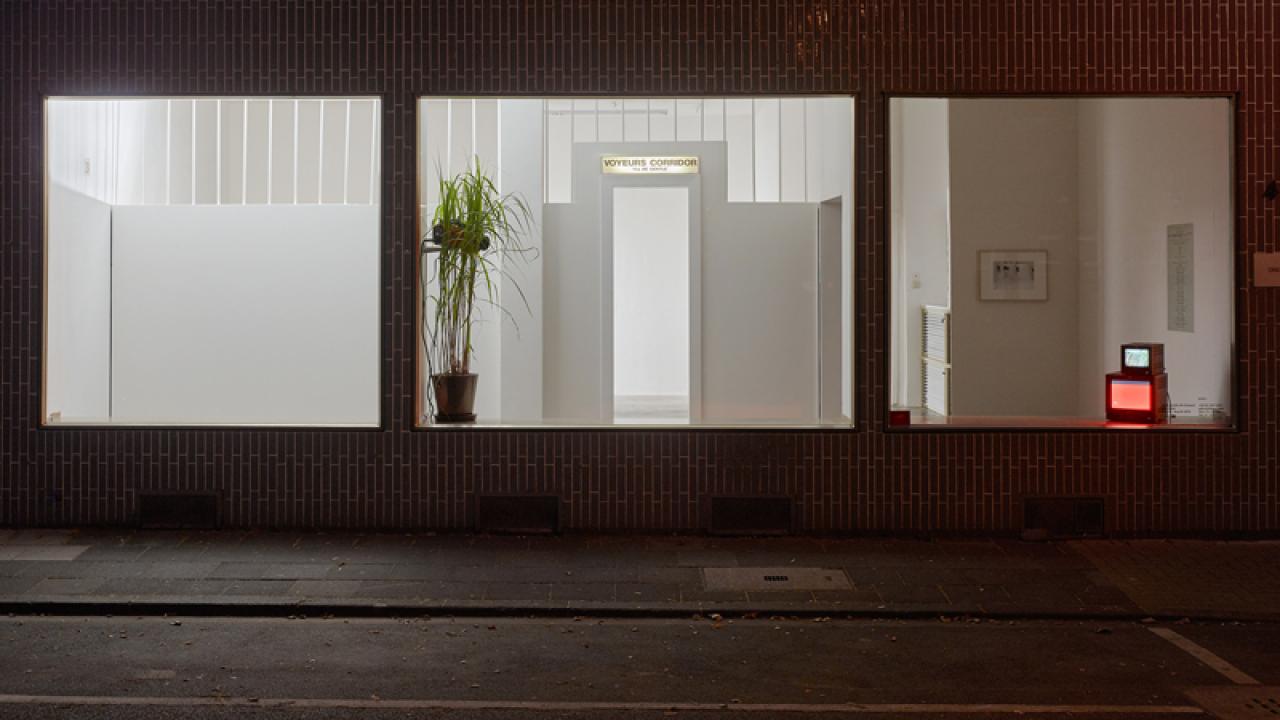