Don’t Be Happy Do Be Worried 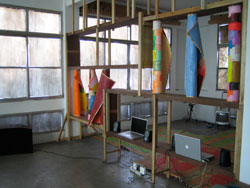 The full title of the show was ‘Don’t Be Happy Do Be Worried. Fifteenth Anniversary of Worrying About: Global Climate Change/Shifting World Views/Societal Collapse/The Cult of Bourgeois Rectitude/Chiang Mai Social Installation Project/Art is Over’. The programme for the opening night promised screenings of 72 experimental films by both Thai and international artists to mark various ongoing, interrelated projects in northern Thailand – along with the ‘Social Installation Project’ there are ‘The Land’ and ‘Midnight University’, among other endeavours. Against this backdrop – and the fact the films were to be divided into hourly programmes under provocative titles such as ‘Manifesting the Unmanifestable’ [sic] and ‘Film as Weapon’ – the exhibition promised much. And much was certainly delivered, though any relationship between expectations and what actually occurred was tangential, to say the least. But this disjuncture should come as no surprise: Gallery VER, founded by Rirkrit Tiravanija and located in a converted commercial building that is nearly impossible to find in a dense market area, maintains an idiosyncratic programme of exhibitions and events typically framed by an aura of the alternative.

The films screened at the opening-night event turned out to comprise edited footage of a previous party on the roof of a fine art school in the northern Thai city of Chiang Mai. Various artists, including Chatchai Suban, Vajira and Franz West, edited the footage that was shot (West edited it by post), and while individual authorship was apparent, authorship was also beside the point. Four projections ran in different rooms of the gallery simultaneously with a TV monitor and numerous laptops, all showing different footage and ensuring that the films functioned as a reflection of this night’s proceedings – so much so that one initially thought the displayed footage was directly recording the current event of people eating, drinking and milling around. The effect was disorienting, turning a conventional exhibition opening into an installation that included its own viewers.

This was where the official billing of the night’s proceedings became confusing, albeit in a productive way. Among the screenings were two installations of double-sided, heavily worked, geometric abstract paintings. A search of the available literature revealed these paintings to be made by the single-named Thai artist: Mit. Moreover, jarring with other promotional material, the entire event was claimed as ‘his first official solo exhibition in Bangkok’. This fact was not supported by more prevalent advertising, which proclaimed the collective spirit and community-based ethos of the projects that formed the backdrop of the exhibition. I was left asking whether this was a solo show by someone who happens to employ other artists or a curated event involving a group of artists. This question was underlined by the fact that the films seemed to merge into one, and, while not quite functioning as wallpaper, they weren’t there to be studiously watched either.

The critic Claire Bishop once remarked, after visiting ‘The Land’, that the apparent failures of the project endeared it to her. These failures included competing objectives among those involved and a lackadaisical attitude to the practical functioning of the enterprise. Something akin was at work at Gallery VER: an event that undermined the demand of its title, an installation of individual films that appeared as one continuous film, and a seemingly organized occasion that, given the nature of parties, encouraged the random and unpredictable. An ideal of organization and the organization of ideals are counteracted by the reality of communal activity. To be endearing is one thing, but perhaps something more profound is at issue: a reflection on both the terms and results of people coming together to effect change. ‘Let’s party’ or ‘Let’s have conversations and forge relationships that could be socially and politically productive’? A question such as this is the crux of a night such as ‘Don’t Be Happy’, and therein lay its success. This night was geared towards personal interaction – and while the ideals of community organization may have been critically exposed (some just got drunk), the terms and understanding of community were emphasized. Hence the event functioned as an important extension of the ethos of ‘The Land’ et al. – which, fundamentally, was the objective.

Finally (in possibly the truest sense of the term) there were the images themselves. Tiravanija could be seen regularly in the video footage. A highlight included shots of the police attempting to break up the original party and the disagreements ending, Thai-style, with great politeness. The evening concluded with shots of half-eaten food and abandoned plates.