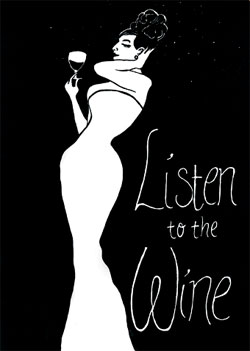 There’s a startling simplicity to Donald Urquhart’s drawings. They originally functioned as invitations and décor for the The Beautiful Bend, an eclectic nightclub that featured a bizarre mix of alcohol-fuelled Victoriana and drag. Urquhart co-ran the club in the mid-1990s with Sheila Tequila and his DJ friend Harvey, and it’s fascinating to see how his graphic works have evolved since then. With this exhibition of work, collected under the title ‘Listen to the Wine’,it’s also intriguing to see how Urquhart aimed at celebrating the effects of alcohol on the imagination.
Urquhart’s tribute to the ‘glamour and drama, melancholy, spite, vitriol, humanity, and hilarity’ of drinking, links unlikely references to popular literature and film. The most improbable example of this is perhaps PL Travers’ third Mary Poppins book, Mary Poppins Opens the Door (1935). In his hilarious exhibition text Urquhart points at the vertigo he felt at re-reading ‘The Marble Boy’, the fourth chapter of the book, in which Neleus, a statue that has been brought to life, describes the lives of people in Ancient Greece: ‘By day they watch the red-sailed ships going in and out of the bay. And at night they listen to the wine-dark waters that break on the shore below.’ Strangely, ‘Listen to the Wine’ is Urquhart’s response to Travers’ text – her evocative phrase ‘wine-dark waters’ was taken directly from Homer, and for Urquhart the phrase speaks rather appropriately of the bouts of nonsense and exceptional clarity people sometimes express while under the influence.
The most overt reference to this revelation was the painting The Wine Dark Waters (2004). Made directly on the wall, the painting pictured a number of characters bobbing about in a rough sea of red wine. Some of the faces at first appear recognizable but actually turn out to be portraits of Urquhart’s friends. Others are famous drinkers from history – an inebriated-looking George Best shares a glass in the water with Elizabeth Taylor. It turns out that the painting is a take on James Ensor’s The Baths at Ostend (1890). The door to illusion here isn’t as ambiguous as Ensor’s original work; instead it operates in an area similar to the mind-altering nature of alcohol itself, in the gap between a certain type of reality and one’s altered perception of it. The surety of the work’s black-on-white execution only reinforces this sense of a misplaced confidence. There’s also a device at work that’s consistent with The Beautiful Bend, a moment where high camp and burlesque humour fuse cultural elements from different periods in history.
This take on the ‘wonderful horror of alcohol’ – Urquhart’s term for the substance’s mind-bending properties – continued in the small drawings nearby. In Last of the Romanoffs (2004) a glamorous female figure stands in profile. There’s something heroic about the drawing: the figure wears a decadent, low-slung dress, and her head is thrown back as if in ecstatic defiance. In reality the portrait is of a drag queen friend of the artist’s who tragically died from drinking too much cheap Romanoff vodka. Here heroic ambiguity is combined with an impish tragicomedy to create something very different from traditional chest-beating bravado.
This theme continued in the nearby Nocturnal Animal (2004), which pictured a small spindly-limbed creature with extended hind legs. (Apparently this animal only comes out after dark, and there’s an example of one in London Zoo.) Somehow the drawing provides a glimpse into a bizarre twilight world, separating it from any location in reality. The same could also be said for Another Sky and His Ear (both 2004). The first of these works is romantic and foreboding, stating ‘Sometimes you don’t care if it’s always night – until you see another sky’ in wispy text against a starlit canopy. His Ear speaks more overtly of giddy night-time visions; a picture of a cartoon ear appears surrounded by black ink and speaks of Urquhart’s shock at recognizing an ex-boyfriend on a dance floor one night from a brief drunken glimpse of the side of his face.
Separated from the other works, Bette Davis (2002) added a final layer of comic drama to the whole enterprise. The drawing is taken from the actress’ appearance in The Anniversary (1968), a warped film in which she plays Mrs Taggart, a one-dimensional, loud-mouthed mother resplendent in a polyester hairpiece and a colour-coordinated eyepatch. Davis’ contorted face appears in the drawing twice, somehow evoking the joyful horror of camp and bad acting.
In one sense it’s strange that all of this dramatic excess combined in an exhibition that neither condoned nor promoted the substance abuse that surrounded it. But perhaps this was part of the point. Maybe it’s the ambivalent strength of Urquhart’s iconic imagery that intrigues us most, his drawing’s simplicity helping us towards unex