At MCA Chicago, the designer’s first museum survey is a crass and corporate affair

On the glass façade of MCA Chicago, the words “CITY HALL”, in scare quotes, tower over Seneca Park, as if mocking the museum’s grand architecture and the important civic function it serves. They’re the first thing we see in ‘“Figures of Speech”’, designer, DJ and artist Virgil Abloh’s blockbuster survey exhibition, which is also his very first museum show. The punctuation marks, denoting irony and detachment, bracket nearly every phrase Abloh has slapped onto the gallery walls, as if to say: ‘I don’t really mean this.’ This is hard to square, though, with the show’s enormous scale and obvious cost, which insist the postmodern prankster be taken seriously – even when he lets us in on the joke.

When Abloh was appointed the artistic director of menswear at Louis Vuitton in March 2018, the news sent a shockwave through the fashion world. It made him the first African-American director of a French fashion house, in an industry more comfortable with appropriating the aesthetics of black culture than financially supporting black designers. Abloh, though, is an arch-appropriator, and his vetting seems to have been done at hyper-speed. Little more than five years earlier, he was largely unknown, the founder of a small label called Pyrex Vision, which sold USD $40 Champion brand t-shirts printed with the word ‘PYREX’ (the glassware used to bake drugs), the number 23 (from basketball legend Michael Jordan’s jersey) and a reproduction of Caravaggio’s The Entombment of Christ (1603–04) for $550 apiece. ‘It’s entirely possible Pyrex simply bought a bunch of Rugby flannels, slapped ‘PYREX 23’ on the back, and re-sold them for an astonishing mark-up of about 700%,’ critic Jian DeLeon wrote for the style website Complex. At MCA Chicago, Abloh has printed the DeLeon quote on a black area rug that must be trampled irreverently to enter the show, where a promotional video for Pyrex plays opposite a Jurgen Teller photograph, What is Virgil Abloh? No. 7 (2017), depicting the designer, dressed in a hoodie inscribed with Marcel Duchamp's moniker, ‘R. Mutt 1917’, while slouched on a pink yoga ball beside a blow-up T-rex and a European Union flag.

Aside from the Caravaggio silkscreens, which recur in the following gallery, the reference to Duchamp is a core justification for the show, which frames Abloh as an artist first and clothier second. Abloh talks about Duchamp all the time. In a 2017 lecture at the Harvard Graduate School of Design, he connected Duchamp’s concept of the readymade to what he calls ‘the three percent approach’, his design mantra to ‘only edit anything three percent’. Yet a lazy scribble on a pair of Nike trainers, resold for wear at a higher, limited-edition price, has little to do with Duchamp’s profound discovery that the meaning of an object can be totally transformed simply by the choices an artist makes. It belies a cynical misunderstanding of art’s conceptual power. Given Abloh’s background as a DJ, ‘the three percent approach’ may owe a greater debt to mixtape culture, and the sampling of old music in newer tracks.

The best works in ‘“Figures of Speech’” hang from custom racks in the second gallery: collection samples from Abloh’s OFF-WHITE, a high-end streetwear brand he founded in 2013 that has since attracted a cult following. The most ‘radical’ of these designs recall Raf Simons’s streetwear forays in the late 1990s, while odd pieces of formal attire appear to borrow heavily from 1980s Yves Saint Laurent. “NEGATIVE SPACE” (2019), an all-black billboard, towers pompously over the racks while beyond it, a neoclassical facade, printed on fabric at enormous scale as a backdrop for one of Abloh’s shows, sags from the gallery wall (False Façade, 2016/19). A wall label describes both gestures as evidence of Abloh’s architecture studies at the Illinois Institute of Technology (his thesis project, a skyscraper cantilevered over the Chicago River, is on view in another gallery), but are ultimately little more than pricey, insipid window-dressing.

The exhibition’s curator, Michael Darling, has done his level best to place Abloh’s practice in an art-historically legitimizing framework. Another all-black ‘billboard’, a monochromatic canvas that hangs above the logo for French bus-stop advertising company JCDecaux, is described as a reference to Kazimir Malevich. In contrast to the Suprematist’s hard-edged abstractions, however, JCDecaux II (2019) is both technically sloppy and dully referential, transforming a celebration of ‘pure artistic feeling’ into a crass punchline about corporate emptiness.

The other ‘art-historical’ works made for this show are similarly dead on arrival: “PINK PANTHER” (2019), an enormous, Calder-esque sculpture of bubblegum-coloured insulation foam, and Cotton (2019), a painting of the titular clothing brand’s logo, which Darling frames as a reference to slave labour. The latter pop gesture isn’t substantively political, but rather commodifies the structural critique of economic racism for the gratification of the white art world. It hangs spot-lit in an all-black gallery, a house of horrors featuring an installation of the numbered plastic signs that mark evidence at a crime scene and a 2019 Louis Vuitton ad campaign, shot by photographers Inez & Vinoodh, featuring small children carrying PVC luggage. If the combination is meant to recall the twin threats facing black children in the US – gun violence and the legacy of slavery – it instigates a different kind of black-on-black violence, one that flattens and profits from the trauma of others. As if to drive the point home, Abloh has packed a clear Rimowa suitcase that he designed with toy guns; titled “LITERAL THREAT” (2019), quotation marks and all, the work dares us not to take the many black children killed by gang shootings in Chicago very seriously. 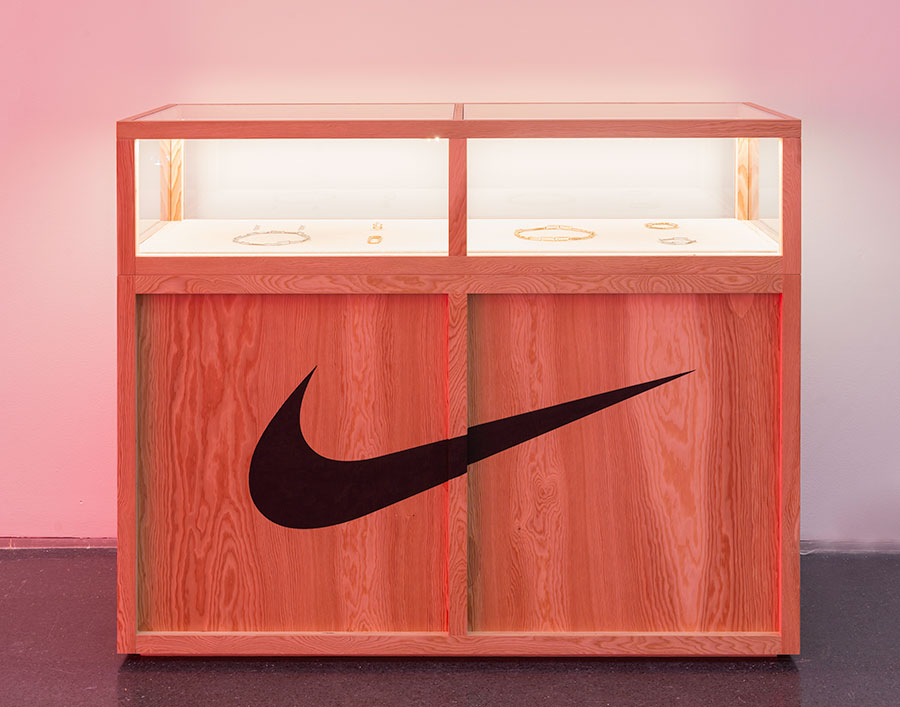 If the show appears tone-deaf to matters of race, it is even less sensitive with regards to class. Abloh’s gold and diamond paperclip necklaces, “TEXT-BASED OFFICE SUPPLIES” (2019), rest in a plywood “TROPHY CASE” (2019) painted with the Nike swoosh. (These appear alongside a projection of DJ-set backdrops of inane recurring phrases, such as ‘Bad Conceptual Art’,  apparently without irony.) Although prices for this jewellery line have not been made public, they’re unlikely to be any more accessible than the line of merchandise Abloh and MCA Chicago have created for the exhibition, displayed in an elaborate shop on the fourth floor called “Church and State”. The name seems to suggest a violation of the boundary between art and commerce, though it’s hardly the first time a contemporary art museum has made its viewers exit through a gift shop – even if both bolster the artist’s corporate brand to a singular degree. There, Caravaggio-themed handbags retail for more than USD $3,000 – astronomically inaccessible to the diverse audiences this exhibition purports to attract.

Racial equity has never been more important in the rarified worlds of art and fashion. Yet both industries’ commitment runs only skin deep. While Abloh enjoys unparalleled success, brilliantly inventive African-American designers like Telfar Clemens and Shayne Oliver are struggling to maintain their creative independence. Clemens’s eponymous brand Telfar and Oliver’s now-defunct Hood By Air have been idea mills for conglomerates like LVMH, which, in the end have chosen to anoint their company man. If we take Abloh at his word, we shouldn’t buy it.

Film , Opinion
The Banal Essentialism of ‘We Are Who We Are’