A few years ago Jim Lambie made a little collage. It consisted simply of circles cut from coloured Kraft paper stuck on top of one another in descending order of size. He used it to explain an idea for a new floor-based work.

The modesty of this palm-sized maquette was almost laughable next to the task that faced Lambie and whatever assistants he and the gallerists might muster. He wanted to cover the entire gallery floor with multicoloured rows of sticky vinyl. The procedure involved sticking strips of a single colour all the way around the perimeter of the floor to form a single line. This would be followed by a second line in a different colour stuck immediately inside the first, a third inside the second and so on until the centre of the room was reached. The scheme was almost childish in its simplicity; the type of thing one would do while talking on the phone - like making a shape out of a sweet wrapper. Basically it was a filling-in exercise, the compositional parameters set by the space in question.

But you had only to look at the floor of the average gallery space to realize that the effect was going to be pretty complex: with just the first few rows of vinyl in place you would have to be an expert in geometry to envisage what would happen at its centre. White cubes may be white, but very few are perfect cubes. A typical space features all manner of irregularities: recesses, odd angles, curves and short protrusions marking points where separating walls have been knocked through. In the course of installing one of Lambie's floor pieces all of these little imperfections are progressively accentuated - like seeing chaos theory in action. The outside rows skirt the edge of the floor in a relatively sedate fashion. Slowly the smooth edges between irregularities begin to shorten. As they do so, they make increasingly strange and dynamic negative shapes in the centre. Where a space has round pillars the result is especially gleeful: each pillar sends out ripples of colour, which eventually confront the larger ripple emanating from the perimeter.

The overall effect of the 'Zobop' series (1999-2002) is explosive. I can think of few instances when gallery spaces have been so saturated with colour. And yet the effect is curiously immanent, as if the gallery had transformed itself into this state overnight while no one was watching. There are probably several reasons for this. One is the fact that these compositions follow the existing logic of the architecture, and another is the absence of evidence of the artist's hand. Then there is the warm aurora reflecting off the gallery walls, which lends presence to their supposed neutrality. Yet another factor may be the impression that the piece has fused with the floor: the thinness and elasticity of the vinyl reveals every little dent and dimple of its surface. In this sense the 'Zobop' series differs from Carl Andre's metal 'tile' pieces, which remain physically distinct from the floors they sit on, despite their radical flatness.

Apart from the various floor-bound, site-specific tendencies of the 'When Attitudes Become Form' generation, the particular precedent for Lambie's 'Zobop' series seems to be the 1960s work of Frank Stella. Stella, in effect, turned the support of a painting into a kind of compositional machine, his own creative involvement being pretty much abandoned once he had determined what shape the stretcher should be. The works' vinyl stripes follow the perimeter of the gallery in the same way that Stella's painted stripes follow the edge of the stretcher. Lambie's floor pieces represent an even more extreme abdication of authorship, since the perimeter of his 'supports' are a given. In addition, although Stella's colour choices are, in a sense, anti-expressive, they are specifically determined, whereas the vast number of stripes required to fill a floor space makes the choice of colour for a single given stripe almost irrelevant. Consequently Lambie can afford to be quite casual in deciding whether lime green should follow purple, as opposed to red, yellow, white or blue, the results overall being fairly equivalent. Sometimes, instead of choosing, he'll grab whatever sheet is closest to hand or go with a helper's preference, perhaps as a way of letting the work determine its own course.

Leaving aside this embracing of chance, there's something Zen-like about the appearance of a space installed with a 'Zobop': it looks simultaneously full and empty, as if managing to combine Arman's Le Plein (Fullness, 1960) and Yves Klein's Le Vide (The Void, 1958-62) in a single work, in a single room. At least, when it comes to surface area, a 'Zobop' is about as large as a sculpture in a room can get. And yet the fact that it covers all the floor space also makes it disappear: by becoming the floor, rather than simply occupying part of it, it takes on a purely utilitarian purpose, and we are bothered by the emptiness of the walls in a way that we are not when the floor is occupied by objects. On some occasions Lambie has installed a 'Zobop' as part of a group show, with works by other artists on the walls of the same space. In these situations his work is both the most dominant and the most absent work in the exhibition: it may be much larger, and its colours more intense, than any other piece, yet the very fact that there are other art works hung on walls where art works are traditionally supposed to be means that the 'Zobop' is, for a while at least, relegated to its practical role - as the thing one treads on to arrive in front of the next piece.

The title 'Zobop' suggests that the work's identity is not simply formal and conceptual, since it declares a relationship of sorts with popular culture. Although its patterns are abstract, being made of the type of vinyl commonly used for commercial lettering, its material has a ready-made vernacular that prevents you from considering it solely as an unusually sited painting. It is this that unites the series with the sculptures Lambie makes from other ready-mades with commercial and pop-cultural connotations. The second syllable of 'Zobop', while rhyming with Pop and Op - two movements it harks back to - also evokes the dance floor, perhaps one temporarily adapted for a school disco or a Saturday night at the student union (one doesn't 'bop' in Ayia Napa). The 'Zo' part is more arcane, suggesting some extraterrestrial race, in tune with Glam Rock's and contemporaneous Funk's fixation with science fiction.

Lambie's copious use of glitter in other works certainly recalls that era. In a recent series of sculptures he encrusted whole turntables with thick glitter, which made them resemble exotic minerals. From each of them he hung bunches of a single other object: the red one, Let It Bleed (2001), is adorned with red, white, blue and brown 'Alice bands'; a thick cloud of safety pins and fake pearls hangs from the blue one, Graffiti (1999); while around a dozen razor-shells hang on strings from the goldy-pinkish one, Razor (2001). The relationship between the turntables and these dangling elements is a little weird, to say the least. Together with the glitter the adornments lend the record decks what Bruce Robinson would call 'voodoo qualities', as if the sculptures serve some unspecified ritualistic purpose. The choice of turntables is apposite: nowadays in clubs they are elevated like altars, with the DJ mediating between the music and clubbers like a priest mediating between God and the congregation.

Many of Lambie's sculptures involve materials associated with the rituals of getting ready to go out, suggesting, perhaps, the split, during teenage years, between how one wants to be seen and how one feels: dressing-table mirrors, safety-pins, non-safety razors, leather gloves, leather jackets, brightly coloured belts, shell suits. Some of these items are associated with particular pop eras that have passed, especially the 1970s and 1980s, when Lambie was growing up. Many of them exhibit a certain pathos, operating like the ersatz residue of the excitement and anguish of adolescence. In some works objects that symbolize adult sexuality are covered with a girlish material applied using methods associated with handicrafts, evoking the physical and psychological contradictions of puberty: in one recent series Lambie made substitute paintings by covering records with strips of wool; in another he sewed buttons of various colours to a leather glove. His sculptures are like something you made as a teenager that somehow survived subsequent clear-outs: you might laugh at the pathetic quality of what was once your object of devotion while all the while recalling its deep emotional wellspring.

For most of us, by the time we're interested in contemporary art that almost visceral attachment to the culture we choose to consume has largely faded, though many of us still sometimes hanker after that old intensity and rush. In many of Lambie's works recent episodes of art history look as if they've been restaged by someone getting into art for the first time, someone who likes its effects but hasn't got a handle on its critical framework, and gets his or her real kicks from the opening chords of a live set by a favourite band. Sometimes recent art and recent pop - and the impulses that give rise to each - appear gloriously reconciled in Lambie's work; at other times his works look languid and lost, as if deliberately set adrift between the two, evoking their disparities and the sometimes wrenching psychological journey from one to the other. 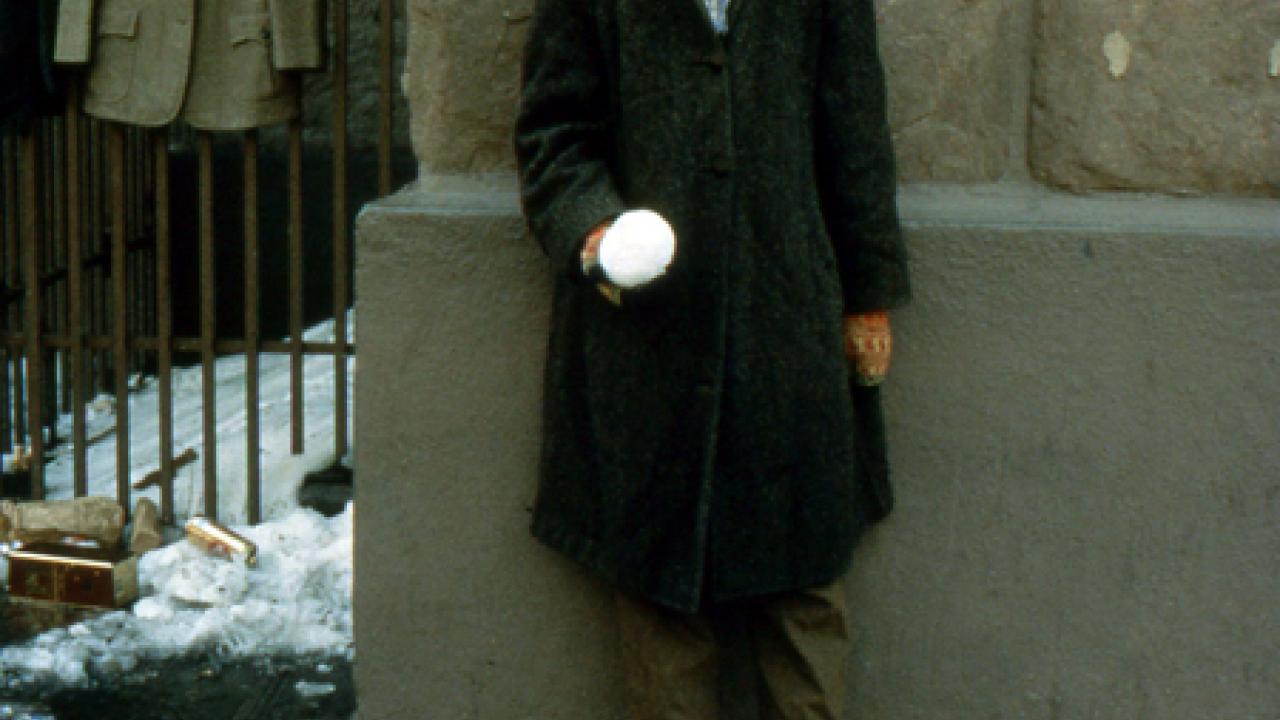 What could you imagine doing if you didn’t do what you do? Being in a boy band