It is unlikely that Raymond Roussel and Paul Scheerbart had any knowledge of the other’s oeuvre during the tumultuous ‘heights’ of their respective careers, although the incredible parallels within their work might suggest otherwise. Labouring at the edge of the precipice of the 20th century’s first mechanized war – but on opposite sides of the Western Front – they were separated not only by the political and national interests but by a much wider (and ironically similar) megalomaniacal breach in the way their fantastic literary fabrications bled into their everyday lives. Perpetual motion machines, artificially resurrected encephalons, crystal cities, aerial executioners, automated dental mosaics – these were the types of inventions conjured in the solitudinous imaginations of the eccentric pair.

Roussel – whose Jules Verne-inspired techo-fabulism aroused confusion and ridicule from just about everyone, save for a small group of bourgeoning artists calling themselves surréaliste – spent the better part of his adulthood in plutocratic seclusion in the Paris suburb of Neuilly or ensconced in his motorized caravan touring Africa and Asia. Similarly, Scheerbart, a successful art critic/feuilletonist among Berlin’s fin de siècle elite, derailed his career by fixating on glass architectonics and Futurist theory – meditations that were unconventional even by the Expressionist doctrines of the day.

With a new spate of translated editions from these overlooked prophets, a belated appreciation from the English-speaking world might begin to re-evaluate Roussel and Scheerbart’s indispensable position in the last century’s design philosophies. Originally published in 1910, Scheerbart’s The Perpetual Motion Machine: The Story of an Invention recounts his failed attempt at perfecting an illusory device. Bringing together dozens of diagrams of the increasingly complicated perpet (his name for the machine in question) along with notes on scientific methodology, cosmology (the so-called Earthstar) and architecture, the memoir presents a brief survey of Scheerbart’s crystalline paradise. ‘How the airships will rejoice over the masses of light! All church steeples can truly be covered with light from top to bottom. Very tall mountains can be illuminated in the same fashion. And then the shining vehicles, the housetops, and the colossal boulevards of light – and the banks of canals.’ As his reveries digress, however, Scheerbart begins to substitute the construction of the machine for the composition of his prose, so that by the conclusion the hapless scientist reveals that the story of his invention is much greater than the contraption itself: ‘Ten thousand Utopian novels were waiting to be written about all these nascent revolutions; 1,000 novels couldn’t begin to exhaust the subject matter.’ The reader is left with a sense of Scheerbart’s stark Utopian vision of space and technology in the service of literary fantasy – a belief that led to his collapse and premature death at the onset of the Great War. Scheerbart was summarily excised from the canon of German literature and architecture, despite his direct influence on Die glaserne Kette (The Crystal Chain), a Utopian correspondence network led by Bruno Taut between 1919–20, in which a small group of architects and artists exchanged ideas on what form the architecture of the future should take; Walter Gropius’s ‘Ausstellung für unbekannte Architekten’ (Exhibition for Unknown Architects, Berlin, 1919) and Walter Benjamin’s unfinished Das Passagen-Werk (The Arcades Project, 1927–40) all of which endeavoured to achieve similar interdisciplinary innovations in both theory and design from beneath Scheerbart’s shadow. 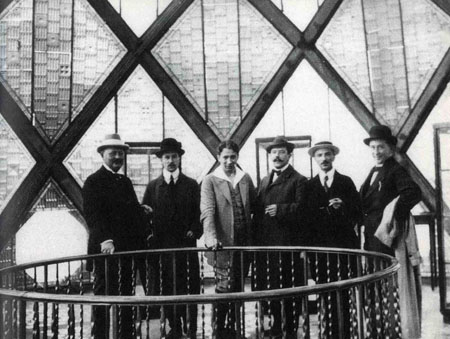 Although he would outlive Scheerbart by almost two decades, Roussel’s alleged suicide in a Palermo hotel in 1933 (at the very zenith of the Surrealist and Futurist movements he inspired) produced a comparable erasure in his literary posterity, condemning the writer who once proclaimed himself greater than Victor Hugo to the hell of anonymity. The recent translation of the 1932 book-length poem Nouvelles Impressions d’Afrique (New Impressions of Africa) by Mark Ford – author of the impressive biography Raymond Roussel and the Republic of Dreams (2000) – makes the author’s final paean to fantasy landscapes accessible to the literary layperson. The 59-page New Impressions – a titular reference to Roussel’s 1910 prose work, Impressions d’Afrique – utilizes a structure that resembles both a digital hypertext and a kind of literary edifice. Each canto begins with a particular spatial or architectural description of Egypt and then quickly moves into a microcosmic series of asides using the scaffolding of parentheses.

As Ford writes in his introduction: ‘If, from one angle, the brackets and footnotes [...] insistently disrupt and disjoin, frustrating, with their seemingly endless digressions and lists of examples, the reader’s urge for completion, from another they serve as forms of connection, like railway points, that enable the poem to cross over into whole new regions of proliferating analogy and illustration.’ So confounding is Roussel’s syntagmatic apparatus that Ford postulates its purpose as an elaborate simulation of war or possibly a chess game. But it is just as likely an architectural landscaping of literary space similar to the fantastic demesne of his novel Locus Solus (1914), a style much copied in André Breton’s cartographic novel Nadja (1928), Gaston Bachelard’s domestic phenomenology, La Poétique de l’Espace (The Poetics of Space, 1958), and Georges Perec’s urban fantasia La Vie mode d’emploi (Life, A User’s Manual, 1978). (It must be noted that Ford’s version does discard Roussel’s alexandrine couplets as well as the curtained pages that he chose in the original edition. For a more dedicated take in English, the reader should seek out Atlas Press’s 2004 publication, edited by Ian Monk.)

Rupert Copeland Cuningham’s 1985 translation of Locus Solus is back in print, and – read as a prose counterpart to New Impressions – it suggests the breathtaking horizon on which Roussel erected his artificial paradise. Set on the estate of inventor Martial Canterel, Locus Solus follows a group of nameless visitors as they are introduced to the eccentric’s whimsical, and at times grotesque, experiments. Critic John Tresch rightfully links the novel to a Futurist tradition that began with Charles Baudelaire’s Les paradis artificiels (Artificial Paradises, 1860): ‘Roussel’s fantastic contraptions and their fairy-tale explanations place the reader in a perfectly artificial landscape. The world of Locus Solus is like that inhabited by the vat-brain: a complete simulation, a self-enclosed spectacle of imagery disconnected from real objects.’ And, in fact, the novel’s pataphysical vignettes – filled with quasi-scientific theories of reanimation, quantum mechanics and psycho-spiritism – resemble a kind of automated language machine in which homonyms and puns are used to construct the ‘spaces’ of the protagonist’s titular estate.

Despite its relative anonymity in contemporary literature, the importance of Roussel and Scheerbart’s work cannot be overstated, as it prefigures a century whose mechanized landscapes were limited only by the size of its designer fantasies.