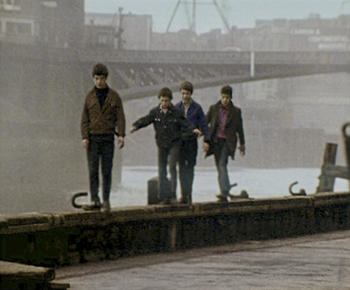 Scrambling over piles of rubble and twisted girders, four young boys – at a glance in their early teens – skinny, pinch-faced, bone-white and wearing trousers that they have long grown out of, chase and charge and throw mud-heavy half-bricks towards a sluggish expanse of ink-black water. There is something peculiarly skewed about the temporal nature of the filmed scene: their features thinned by vitamin deficiency and their barely broken voices a chaotic roar of accelerated cockney patois, these four boys could have strayed through a fissure in time from the middle of the 19th century. At the same time, the wastelands over which they are clambering, the high blank windows of distant warehouses, the sense of intense cold – every now and then there are sudden flurries of fine snow, itself now almost archaic – have an odd touch of the future. There is a quality of science fiction to the landscape: Quatermass (Nigel Kneale’s occultist sci-fi teledrama of the mid-1950s) by way of urban Brutalism. In short, it’s the terrain that will comprise the mythic landscape of Punk.
What we are watching is a programme made by the BBC’s Man Alive documentary strand in 1971. And once you know the exact date of the film, it seems to tumble the combination lock of the strange entanglement of atmospheres. Titled ‘Vince, Paul, Lawrence and Richard’ (the names are classic early-1960s’ choices and could have been borrowed from the members of almost any British beat group of that decade), the film follows the activities of four known ‘problem’ children who live in a poverty that now seems barely imaginable in the East End of London. When the camera pulls back on the boys beside the Thames, however, the contemporary viewer is in for a shock: Vince, Paul, Lawrence and Richard are literally 50 metres from Tower Bridge, trespassing on a wharfside on which now stands the Tower Hotel, directly facing what has become the smart terrace of the Pont de la Tour restaurant. So where did all the time go?
In answer, this is just one of three programme-length films and six short news clips that have been retrieved and re-examined (with some updated interview material, conducted with the original subjects) by artist Chris Dorley-Brown as part of the BBC Archives Project. Two DVDs, collectively titled ‘The BBC in the East End 1958–1973’, with an accompanying essay by novelist Tony White, the emotional timbre of these mesmeric films serves to point up a highly charged nexus of ideas and idioms that has come to dominate the relationship between contemporary visual culture and the atmospheric potency of the muniments of modern history.
It is a territory that might be described as highly magnetized (with regard to its forceful pull on generational nostalgia), and well defined perhaps, as the seductions of archive: an experience of the middling distant past through its own historical media, in which the quotidian landscape and its everyday people become possessed of a certain glamour and romantic strangeness. Such precision-mining of cultural history, and in particular the connection through research and re-enactment of the past to the present, has become a significant aspect of work by contemporary artists. In their very different ways British artists Jeremy Deller, Adam Chodzko, Paul Rooney and Jamie Shovlin have all worked with history and archival material. (It must be a boy thing.) But their shared interest, perhaps, is in furthering our understanding of the consciousness of the past and of the fluidity of temporality.
With regard to the films collected and re-mediated by Dorley-Brown, such themes seem central to our contemporary viewing of the material. At one remove – through the prism of teenage lawlessness – it appears we are being treated to a glimpse into the green room of the great pop era between charting rock ‘n’ roll and glam rock. As such, Vince, Paul, Lawrence and Richard take their places in an urban world ruled by A Clockwork Orange (Stanley Kubrick’s film of Anthony Burgess’ horrifying novella was released in the same year, 1971) and David Bowie’s recording of Ziggy Stardust and the Spiders from Mars, which hit the racks a year later.
Encoded deep within the seduction of archives is the experience of seeing modern phenomena documented at the time when they were new. For example, a photograph by Dorley-Brown of a one-inch Sony video deck (made when film technology was based on dials, rather than digital), taken at the BBC archives in Ealing, becomes somehow empowered with its own historical narrative. As the inhabitants of a Postmodern world, archival material seems to return us to a time of potential as opposed to satiation.
So ‘Why did it all have to change?’, as Morrissey once asked; and he could have been referring to the shoe shop scene in the 1961 film A Taste of Honey, or to an old holiday snap of gangster Charlie Richardson, or to the mid-20th century: Pop-era detritus that until recently might be found in the steamed-up cafés and derelict winter gardens of any old English seaside town. The point was that the past could appear to be not just ‘another country’ (to borrow the title of Julian Mitchell’s 1981 play about the schooldays of Guy Burgess), but a place of heightened emotional involvement – the primary destination of classically romantic transcendence, culturally enabled.
Also included (with updated interview material) is the fascinating ‘Open Door: East End Channel 1’ film from 1973, made by the Basement Project Film Group – enabled by the then newly created BBC Community Film Unit. Counter-culturally politicized, the programme continues to give off the heat of what was still (in the early 1970s) energetic and densely networked radical activism; also a reminder of how tense the relationship between television and the public (other than as tamed studio audience) used to be. Community-created media – as has now evolved through the internet, unchaperoned by the cumbersome formalities that existed in television nearly 40 years ago – had a tang of revolution about it, sitting ill at ease beside the largely patriarchal authority that the BBC was taken to represent.

These films could be taken as a fundamentally liberal humanist, at times bourgeois and at times determinedly leftist view of modern society. (This was, after all, the boom era of academic sociology and fashionable Trotskyism – ideologies rendered counter-culturally operational in the 1960s, and with a temper somewhat different from the Social Realist intellectualism of the mid-1950s, as expressed, for example, by the film parables of the Free Cinema movement.) The Postmodern relationship to the recent past can equally be regarded as deeply reactionary: a belief in the past as a somehow ‘better’ place, richly charged with its own enticing iconography, open to stylistic colonization. But few artists or filmmakers have managed to hold these opposed views in tension – the lucidity of modern realism within the romantic view of history – as successfully as Gilbert & George. They seem, in fact, born to the task. Pioneer settlers in the former badlands of London’s East End, both from essentially working-class backgrounds, they have described their beliefs as those of ‘conservative anarchists’ while developing one of the most singular artistic statements in the history of modern art.

As brilliantly documented in a new film biography, With Gilbert & George (2007), made over an astonishing 17-year period by one of their former models, Julian Cole, Gilbert & George have maintained a career-long vision which eschews intellectualism for emotion – a vision upheld by the tidal wash of change in the streets around their East End home. The fact that Cole has made his tightly edited, yet epic film out of nearly two decades of filming, lends a fascinating sense of temporality to the finished piece. Working at times from a former pub in Cable Street (itself an area heavily charged with the political conflict caused by fascist agents in both the 1930s and the 1970s) Cole has managed to convey the sense of Gilbert & George as witnesses to massive shifts in social, artistic, cultural change – the freak squalls of fashionability, no less than those of controversy, becoming like weather in the somehow eternally dank-looking streets that form the basis of their work. In this their art describes a temporal thoroughfare, ceaselessly encoded with the passage of largely anonymous human lives. They seem to record the post-political melt water of social history, and in so doing describe the nature of both the haunted present and the sleepless past.