Madame Tussaud, the historic immortalizer, is one of several protagonists in Ed Atkins’ recent body of work which comprises both Death Mask I and II (2010). Tussaud’s success at exhuming life using inanimate material makes her an appropriate figure to drive the artist’s fiction, picking up on his extraordinary attempts at implanting the living into the inorganic, via writing, drawing, high-definition video and sound. Each of Death Mask I’s components – two screenplays, two videos and several objects – is a reincarnation of sorts: historical figures become living heroes and B-movie soundtracks are recast as contemporary scores; structural limitations are transformed into a springboard for boundless innovation. Death Mask I toys with the idea that a digital camera without celluloid is like a deceased human body; having temporarily represented the living, what physically remains of both is merely code. Art and cadavers have infused Atkins’ previous works with a joint sense of horror and humour. For example, Impulses to Reanimate a Dead Alsatian (2010) comprises a cassette tape, player and a six-page screenplay taped to the wall. Inspired by a 1974 performance by Dennis Oppenheim, the artist reinterpreted the sound of a dead Alsatian being laid to rest on a keyboard by recording his own groans, reconstituting the original chord changes as the dog’s rigor mortis set in. Death Mask I takes this impulse further, playing high-definition videos malleability against its structural limitations, appearing like a melodramatic attempt to stab life into the digital file.

The video Death Mask II: The Scent comprises a medley of interlaced images repeated and altered in evolving colour tints and dividing frames. A piece of fruit floats mid-frame, cast in increasingly zesty tones and accompanied by Atkins’ riffs on electric guitar. A candle burns in the darkness, a light spectrum appearing at the contours of its flame as the camera changes focus. Later, this form multiplies and rotates, a material trickery mimicked by the accompanying sound of a trip switch clicking. A woman’s short blonde crop is filmed from behind, her ears and neck visible but her expression and profile hidden. A spring-loaded calculator rests on a chroma-key plinth, released by an anonymous hand, its every unfurling accompanied by the tawdry score from the 1980 Italian horror film Cannibal Holocaust (directed by Ruggero Deodato), which – on repeat – ingratiates itself as the work’s oddly comic theme tune. As the bare form of each image reappears, surfaces crack and run, dissolving into one another; candle wax mutates to black ink poured onto the fruit’s white inner flesh. Here, digital alteration is culinary substance as much as technical tool.

Atkins employs a pithy lexicon of images and devices in his work. Many devices in Death Mask II: The Scent and Death Mask III – a video partially inspired by the British naturalist Alfred Russel Wallace’s 1856 account of his journey up the Amazon in search of the durian fruit – also appear in the videos Cur (2010) and A Thousand Centuries of Death (2009). Music is central rather than subordinate to the videos: Atkins’ soundtracks – which include his own compositions – combine the amplified noises of image tampering, clicking, tearing and ripping with synthesized adaptations of television and B-movie soundtracks by Henri Mancini, Marcello Gombini and Pierre Bachelet, alongside extracts by Dvorák, Popol Vuh or the whistling of Fred Lowery.

In all these videos, colour frames randomly appear, breaking up faster image sequences. Subtitles pop up at intervals on the lower horizon, either in primary or diluted colours. Due in part to the power of the soundtrack, these added obscurations do nothing to dilute the appeal of these loud, visceral and immersive works. Pointed references to Hollis Frampton and his Structuralist filmmaking contemporaries (from the camera’s rendering of fruit, to illustrative soundtracks and partially suspended narratives) seem suspicious rather than supportive of this art history. Here, digital film’s malleability is not undermined by rhetorical indicators but is instead treated as doughy and vulnerable. Somewhat over-dramatically, each laceration to the digital reel lands like a faux-punch to the viewer’s gut.

In Death Mask III, the blonde woman’s back appears again between sequences of the camera climbing arid hills, swerving through hairpin turns, or channelling furiously through forest landscapes. Still and silent, she faces the sea, offsetting the tension of more high-octane sections. Similarly, in his drawings Stand in for a Severed Head (2010) and Untitled (2009), Atkins presents the outlines of human heads but is careful to conceal their facial expressions with their innate emotional directives. Instead he generates these with overt technical effects inscribed in the score, camera-movement, sequence editing and colour blocking.

In contrast, the screenplay of Death Mask I (presented in exhibitions as a manuscript) describes the human face in minute detail. Its protagonist, Madame Tussaud, travels through time to preserve the heads of Robespierre to Michael Jackson and delivers riotous monologues about the intricacies of every recreation. Refusing to show faces in his visual works, Atkins’ writing does so with relish. And just as technical effects become the substance of his videos, the screenplay’s conceits become central and emphasized in prose; stage directions and absurd soundtracks are arranged through upper and lower cases ‘as a way of reintroducing itself and simultaneously representing madness: dischord on the accordion’. Atkins’ new works play out the shortcomings of a new media by playing it against an old one, conducting life’s chorus throughout the panoply. 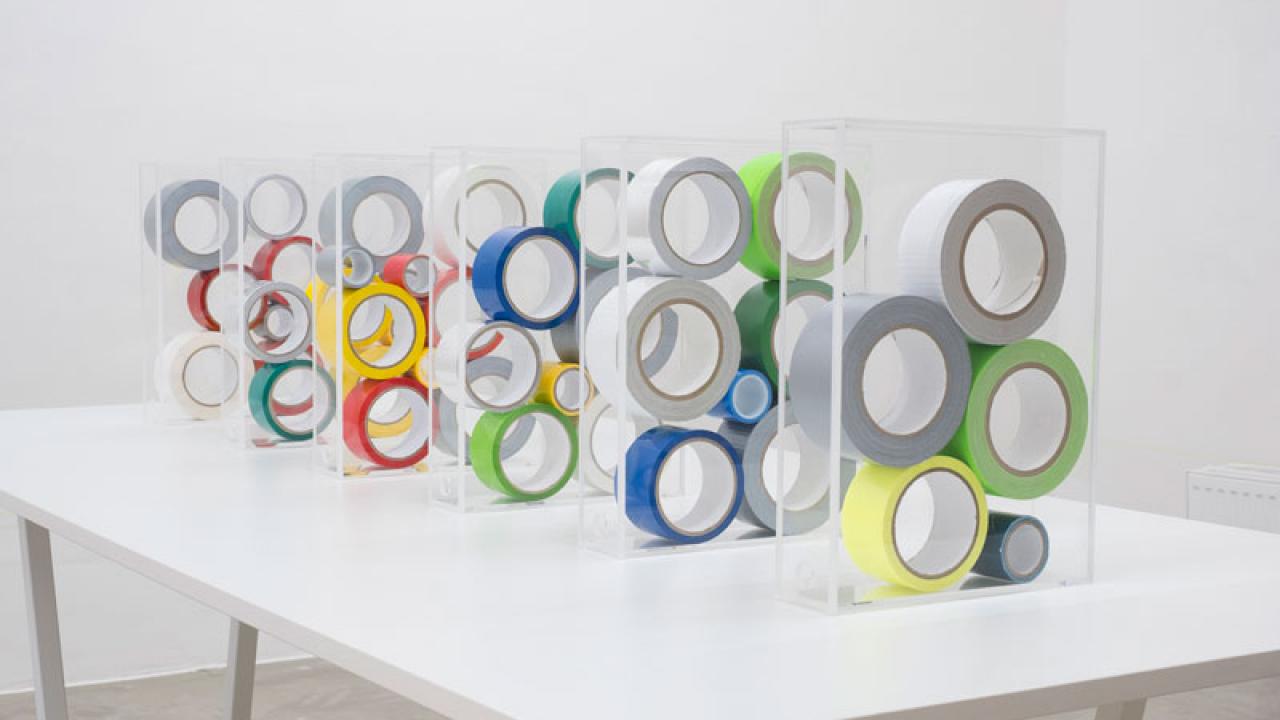