If Cameron Crowe had become a painter instead of a director, he might have paved the way for Edgar Bryan's ambitious but ultimately disappointing paintings. Crowe displayed dorky arrogance when he repeatedly referred to his most recent film, Vanilla Sky (2001), as a 'cover' of the Spanish original, which only served to diminish the references to Billy Wilder, Jean-Luc Godard, John Lennon and Bob Dylan. In his début solo show, Bryan displays six paintings which include impressive references to Michelangelo Caravaggio, Francisco de Zurbarán, Jean-Siméon Chardin, Edouard Manet and Frans Hals. Unfortunately, as in movies, good references alone don't necessarily make for good art. If referring to something were enough wouldn't the project of art be easier to navigate and pretty unsatisfying?

Take, for example, The Billiard Match (all works 2002). The corner of a pool table juts out in front of a grotesque fool who gestures away from a bearded guy seated behind the table. The fool, loosely a Hals type, dons old-timer brown garb, including a feathered hat under which his heavily worked right eyeball bulges obscenely from its socket. Although the seated gentleman invokes a Manet type (blacks, blues and an arched eyebrow), Bryan has updated the trope into a Less than Zero-like flâneur. A blurred billiard ball hovers in mid-air. The fool holds the cue behind the seated man's head, pointing to an opposite wall. You could argue that the cue separates the pictorial space between these disparate characters; a vertical shadow behind the Manet figure might similarly describe separate, parallel spaces. But the hovering ball synthesizes the space, 3D-like, so that any potential spatial tension is dissipated, and the figures approach such caricature it hardly matters anyway.

Bryan has previously exhibited some still life paintings but here the figure remains central. Perhaps a nod to the 19th-century English cartoonist George Cruikshanks, Letter to Cruikshanks forewarns the subject of the peril that will befall him should he not 'return the potatoe'. Cruikshanks, himself a contemporary bearded figure who resembles Bryan's gallerist in a blue T-shirt, displays the typed letter from behind a table on which the aforementioned potato rests amid some tattered books. It seems that one reason a painter would structure a painting of a potato is that the painter can really paint a potato. But Cruikshanks' potato is a forlorn thing, a brown splotch with a red spot and a black outline. As if to emphasize the point that Cruikshanks is a beleag-uered fellow, Bryan paints bags under his bleary eyes and adds several holes to his shirt. If I've missed the point, maybe it's that, by painting his gallerist in an old-fashioned way, Bryan complicates issues of patronage. I might agree if Bryan didn't reduce it to an in-joke (the letter is signed 'O'Brian'). If 'Cruikshanks' (or Bryan's) general trajectory is meant to be Postmodern, his paintings lack the technical facility necessary to make up for otherwise tame critiques and are too conceptually thin to support his overall poor handling of paint.

Still Life with Chimay and Sausages is a very big painting of a small still life, which is confusing until you see the hazy figure in it, a Vermeerish female silhouette in a doorway. Again, a table-top dominates the foreground and here shows off a greyish-white plate with a few brown sausages and some other creamy-coloured objects. The maroon Chimay bottle rests on its side. The objects on the table look loose and brushy. At the edge of the table a very curious thing happens: the middle and background of the painting are rendered as a blurry, photographic Gerhard Richter painting. Unfortunately, Bryan doesn't touch upon the resemblance or finish present in Richter's paintings. Richter might even argue that issues of resemblance and finish are inextricably linked (in his own paintings, anyway, especially as they could relate to both Vermeer and Manet).

You could read Bryan's paintings as complicating, reading, 'covering' or paying homage to Richter (or Hals or Jan Vermeer or Manet). Although I don't think that an artist, in his first solo show, should be expected to paint as well as his influences I do expect him to engage with the concerns and limitations of earlier paintings and not just their effects. I would like to take his work on such terms, but in order for a dialogue really to get going Bryan has to articulate more precisely his relationship to painting. 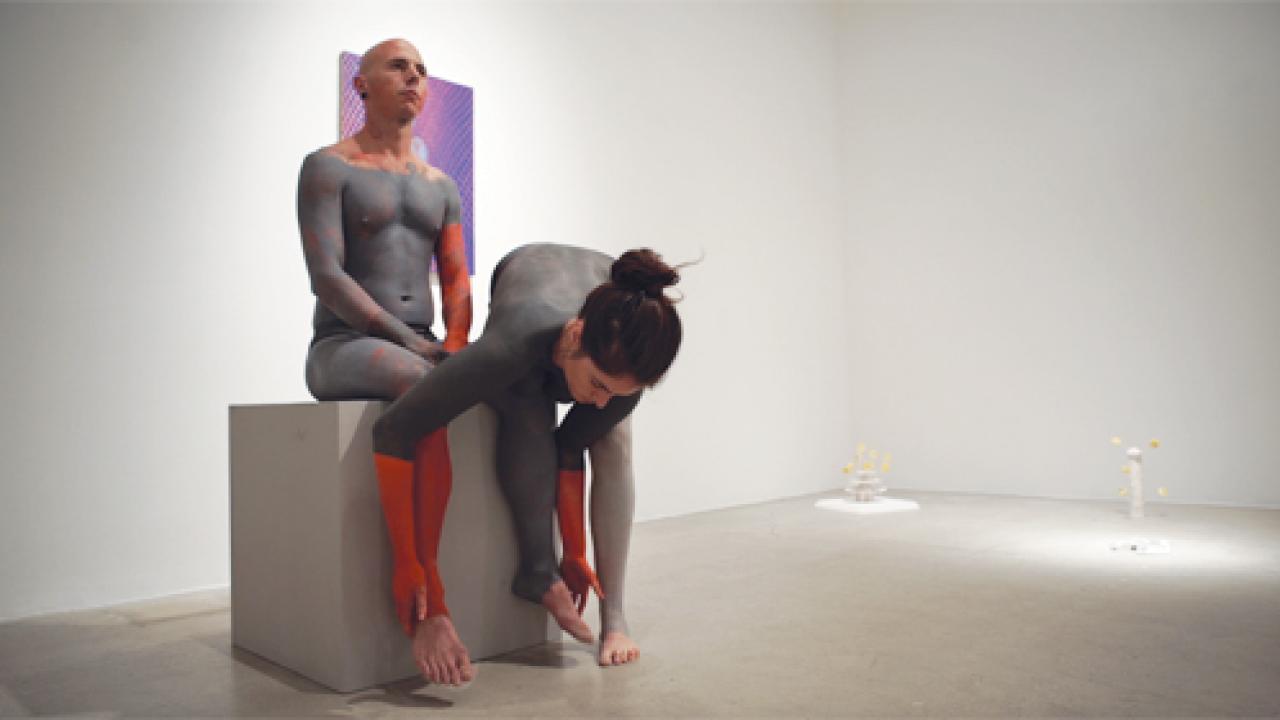 Reviews
This Sentence, by Public Fiction