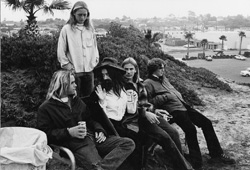 The first word that leaps to mind when regarding Eleanor Antin’s recent photographic work is, unfortunately, also one of those words best avoided in polite conversation, that cheap bauble of pop philosophy and shyster theoreticians: I mean, of course, ‘Postmodern’. It’s almost as if, on seeing these magnificent photographic recreations of ancient Rome, themselves reflected through the lens of 19th-century salon painting, one finally understands what the word ‘postmodern’ might actually mean. The photographs’ sharply focused contours and brilliant colours, too real for their classical subject matter; the mixing of disparate historical eras, aesthetic styles and mediums; the mannered poses and air of decadent ruin; the scenes of Imperial life acted out in the sunny climes of late-capitalist La Jolla: here we have a properly Californian Rome, accomplished by a native New Yorker no less! There is undeniably a kitsch aspect to Antin’s series ‘Roman Allegories’ (2004) and ‘The Last Days of Pompeii’ (2001), a campiness that at times recalls the polyester atmosphere of a porn set. It would be too easy, however, to trot out some old quotations from Clement Greenberg and Hermann Broch to dismiss Antin’s melodramatic photos as ‘pseudo-culture’ or ‘evil in the art-system’. Even Godard had his kitsch moments in Le Mépris (Contempt, 1963), the film in which he tried, via Alberto Moravia’s eponymous 1954 novel, to bring together the mythological world of ancient Greece with the task of making art in the capitalist present. Is there not, perhaps, something similar at stake in Antin’s work?

Antin has been well known since the 1970s as a pioneer of conceptual art. Two earlier works in the exhibition exemplified her innovative theatrical approach, and served to frame the artist’s more recent creations. ‘Recollections of My Life With Diaghilev’ (1980) consisted of a series of images and texts portraying Antin in the character of Eleanora Antinova, a fictitious American prima ballerina of Diaghilev’s Ballets Russes, and the only black woman admitted to the prestigious company. The pictures show Antinova in the ‘Great Roles’ she performed throughout her fabricated career. By means of this double persona (playing at being a performer), Antin was able to explore a wealth of issues related to gender, race, politics and artistic creation. Similarly, in ‘The King of Solana Beach’ (1974–5), Antin becomes the self-appointed ruler of Solana Beach in Southern California, a guise that allows her to construct an idealized male self while also involving herself in the travails of community life. The black and white photographs document some of the King’s daily adventures, listening to his subjects’ concerns and dispensing sage advice. A tragicomic sentiment reigns throughout, for the King is also a buffoon (a ‘poor player’), and ultimately powerless to protect his realm (from a development scheme).

If the artist no longer plays a starring role in her own work, her theatrical sensibility and allegorical impulse remain as strong as ever. The exhibition’s title, ‘Empire of Signs’, recalls French semiologist Roland Barthes’ eponymous book, in which he unravelled the codes and images of a Japan that he claimed to be a fictional creation: ‘If I want to imagine a fictive nation, I can give it an invented name, treat it declaratively as a novelistic object […] I can also – though in no way claiming to analyze reality itself – isolate somewhere in the world (faraway) a certain number of features (a term employed by linguistics), and out of these features deliberately form a system. It is this system which I shall call: Japan.’ In a comparable way, Antin’s recent work sets out to excavate far-off worlds and exotic iconographies with the aim of offering not a ‘true’ portrait or representation, but a system of particular elements drawn from her own imagination: Rome. Her photographs show landscapes dotted with crumbling columns, a band of theatre players roaming through a ruined temple, toga-clad figures wandering into the sea, aristocratic revellers choking on a slew of golden coins, a bare breasted maiden posing in an artist’s studio… What is this fictive land? Antin’s Rome is effectively threefold: Rome-in-itself, the distant underlying referent, the ‘lost object’ of history; Rome-for-Europe, that is, Rome as the fantasized ideal of colonial-era France and England; and, finally, Rome-for-us, the horror of violence, decay and inevitable downfall. It is this last characterization that provides the work’s allegorical punch: ‘Empire’ quite evidently refers to present-day political realities; the fall of Rome symbolizing a fear that haunts today’s triumphal neo-liberal spirit. What is crucial, however, is how the work’s socio-political meanings are intertwined with distinct aesthetic values, themselves related to different historical periods: the theatre, the ragged band of travelling players wandering about the landscapes of ‘Roman Allegories’, the academic painting of Nicolas Poussin, Lord Frederic Leighton and Jacques-Louis David intentionally emulated by the artist, and, of course, today’s large-format, glossy colour photographs by the likes of Thomas Struth et al. Once the King of a strip of beachfront property and an accomplished ballerina, here Antin proves herself a most adept (the title seems fitting) Rococo photographer.