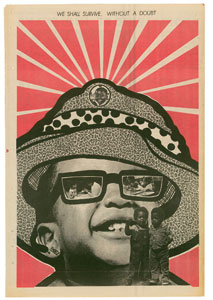 In 1980 the final issue of The Black Panther newspaper was published. Established in 1966 and boasting a circulation of 400,000 at its peak, its objective was to advance the social and political interests of the Panthers and to recruit and inform supporters; this was carried out in large part by its art director, the Black Panther Minister of Culture, Emory Douglas.

Douglas, a former graphics student at City College in San Francisco, joined the group in 1967, at the age of 22. His work on pamphlets, posters and the newspaper transcribed the party’s ideology into a visual iconography that eventually defined its identity. ‘Black Panther: The Revolutionary Art of Emory Douglas’, at the MOCA Pacific Design Center, was not the first Douglas retrospective, but it was the first at a major museum. A selection of offset lithographs lined the walls of the Pacific Design Center’s two adjoining rooms, with original newspaper pages housed in glass cases and explanatory texts throughout.

At the centre was a wall-sized painted reproduction of a lithograph from 1969, showing an African-American woman, framed by a pale and dark-pink sunburst and wielding a gun and a spear, accompanied by the text ‘Afro-American solidarity with the oppressed People of the world’. The statement introduced the fundamental rhetoric that informed all of Douglas’ work for the party: that of the struggle between the oppressed and the oppressor. Political art is, by its nature, often an opposition; the promise of its truth is its opponent’s lie. The us-against-them generality of social oppression assumed a strategic specificity for the Panthers that aligned the work less with the Uncle Sam model of pointed-finger propaganda than with left-wing movements such as Mexican muralism. In their original contexts, primarily posters in blue-collar neighbourhoods and on the back page of the newspaper, the images were aimed at a working-class audience that may never have visited a museum: the ‘lumpen’, as the Panthers, following Karl Marx, termed them. As a result, Douglas leaves little room for misreadings. His most polemical figures, outlined in thick black ink, have the unyielding presence of woodcut prints and a linear efficacy that opposes the bourgeois excess of art production. Eye to eye with the viewer, they serve as simultaneous reflections and appeals – ‘us’, should we so choose.

The inclusion of text and collaged photographs further elucidates the issues that guided the Panthers’ agenda. In a lithograph from 1969 photographs of race riots, police brutality and lynchings are collaged into a helmet worn by a crying soldier and accompanied by the slogans ‘Our fight is not in Vietnam’ and ‘Free the GIs’. Juxtaposed with violence, exploitation and death, the naivety of the crying soldier becomes a stand-off with the passive viewer.

The same poster highlights the range of issues addressed by the Panthers. By the early 1970s the iconic figure of the armed freedom fighter had given way to layered allegories of political awareness and engagement. A poster from 1972 of a pregnant woman carrying a grocery bag promotes jointly the Panthers’ Free Food programme and various African Americans (including Panthers Bobby Seale and Elaine Brown) running for political office. Simultaneously it points to the relationship between the programme and the candidates and to the unspoken consequence of non-action: going hungry.

Forty years later, though, the armed freedom fighter, stone cold in black jacket and black beret, remains the indelible symbol of the Black Panther Party. The image, like those of Che Guevara and Mao Zedong, is cultural shorthand for a revolution long ago severed from its visual referent. As the exhibition consigned the revolution to history, through its vitrines and texts, it ironically recast the posters in the privileged role of art object, on the other side of the Panther struggle.

However, the museum also granted an afterlife to otherwise ephemeral images and, by extension, their ideals. In one of the exhibition’s most lingering works, made in memory of Chicago Panther leader Fred Hampton, who was killed in his sleep by police, a quote reads: ‘You can jail a revolutionary, but you can’t jail a revolution.’ Sealed away in the hermetic stasis of the white cube, the poster plays the jailed dissident. But it pulsates with the force of a revolution, somewhere on the outside, that survives.