The American premiere of Carter’s new film at MoMA 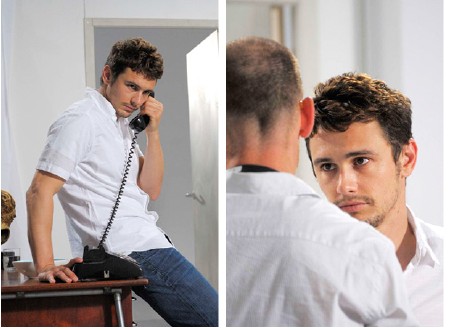 It is a paradox of portraiture that nothing obscures a subject quite as powerfully – or as completely – as a face. And if the subject in question happens to be a ridiculously handsome film star at the peak of his success, what a relentless obstruction that face may be.

Erased James Franco (2009), the latest film by New York-based artist Carter, tackles this question head-on (as it were) by offering the young actor up to audiences for closer – if not necessarily clearer – inspection. For 63 minutes, James Franco stars as James Franco, reenacting moments from all of the film and television roles and appearances of his career so far. While one might expect the reflexive elements of actor and character to come to blows in a hall of mirrors, imitation is not the exercise here, and Carter – true to form – presents us instead with a collage of sorts. Franco wears no costume, no make-up. He performs on a rather flimsy, generic-looking ‘office’ set built inside a studio. The lines of dialogue Carter appropriates to cobble the script together are – according to the director – performed by Franco at ’50%’, a direction that makes for an acting style which the actor himself described as ‘slightly insane, maybe drugged.’ There are very few indications as to what words came from which sources, making the distinction between reenactments difficult, if not impossible. (I must confess that I am not enough of an aficionado to have identified more than a few. Spiderman or Spiderman 2? Perhaps Spiderman 3?) The effect is loose, languorous and rather disorienting, and one soon forgoes the guessing game to simply watch Franco at work.

But Franco-as-Franco is not without interruption, for Carter also casts the actor as Rock Hudson as Tony Wilson in John Frankenheimer’s Seconds (1966), and as Julianne Moore as Carol White in Todd Haynes’ Safe (1995). The choice to break protocol is not a purely random one. Both films tell a tale of an individual at odds with their body: in Seconds, Hudson plays a businessman who, through a series of radical, painful surgeries, is given a new identity as the artist he’d always wanted to become; in Safe, Moore’s character develops multiple chemical sensitivity, rendering her unable to perform her duties as wife and mother. Bound to and limited by their own bodies, the characters’ plights could be said to literalize the actor’s challenge: to transcend the physical in order to embody the fictive, the imagined, the projected, the desired.

Of course, it is impossible to watch Erased James Franco and not think of the films of Andy Warhol. Although Warhol used a film camera to create his own stable of superstars, Carter does seem to have taken a cue from films like Bike Boy (1967), in which Warhol’s script doubles as a distraction for his actor, allowing the director to create a document of his leading man within his fiction. (A note on style: Carter leaves in – or constructs in post-production – flash frames between certain edits, presumably as a visual homage to the infamous Warholian ‘strobe cut.’ However, where strobe cuts indicated Warhol’s choice to edit his films in-camera – he was adverse to post-production of all kinds – Carter took a few months to edit his film.)

According to Carter, the greatest catalyst for the film’s conception was Robert Rauschenberg’s famous trump-as-tribute: Erased de Kooning (1953). As the story goes, a young Rauschenberg asked the painter (whom he deeply admired) if he could have one of his drawings to erase. De Kooning agreed, and even made certain that the drawing was one he would miss. Whether read as Oedipal slaying or opportunistic strategy, Rauschenberg’s milestone erasure accomplished – among other things – not only the removal of an artist from his own work, but also the transference of a work of art from the physical world into the realm of myth. Staring at the paper to study the faint traces of what de Kooning once drew, viewers are left in a state of perpetual wonder and projection. In effect, Erased de Kooning’s absence guarantees a particular kind of presence, of preservation. His work will now be drawn anew each time it is looked at.

Film, however, is not a medium that affords that kind of image production, being too literal a means of image preservation. What remains elusive about Erased James Franco isn’t actually James Franco, for in the end, he isn’t erased so much as he is redoubled or remixed. Of course, an audience can never truly know a celebrity from their persona, an actor from their role, a private life from its public displays, though I am not certain we learn anything very new about these dilemmas from this film. But given the opportunity to stare for an hour at a face like Franco’s, who’s complaining?