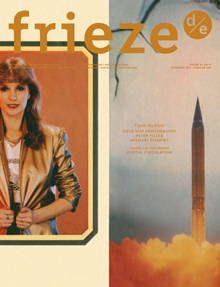 Often a group show is a thesis; sometimes it’s more of a feeling. The latter was the case with Essential Loneliness which, despite the title, felt more like a party: one in which the participating artists gathered to explore the emotional limits and generative gifts of isolation – or not – together. The works on view in Taylor Macklin’s Zürich apartment had a casually transgressive feel: emotional succour, bourgeois companionship, institutional support and mental well-being (whatever that is) seemed absent, unattended, uninteresting. The show – its curator, its artists – had other concerns.

Why was I left thinking about Simone Weil? Yes, curator Nikola Dietrich based the show, in part, on Chris Kraus’s seminal, epistolary novel-cum-confessional I Love Dick (1997) and its road trip of female abjection and emancipation in the art world (and world world). And yes, Weil’s Gravity and Grace (1952) inspired Kraus’s 1996 film of the same name. Perhaps it’s that, as Neal Oxenhandler writes of Weil, the ‘emotional tone of her work … involves a tension between opposing impulses toward mastery and abjection.’ So it went here: an interest in the feminist virtuosity found in degradation brought the show to Weil’s side; pulling it away was the artists’ fervent employ of embodiment, anathema to Weil’s body denial. And yet the French philosopher-mystic’s intense weirdness, profound seriousness, masterful solitude, and exemplary marginalization – that ever-female, and female artist’s, theme – still found rhymes in the work on view.

Consider Anicka Yi’s two soap-and-resin ‘paintings’ (Plain Oatmeal Thoughts and In-Q-Tel, 2013), which hung on the wall like transparent children’s stomachs, offering a view into the metabolism of living bacteria going on inside: petri dishes, rubber tubing – Hans Arp-like abstraction married to gut flora, perhaps. Bodies – animal, simulacra, elusive – were raised by numerous works, from Tobias Spichtig’s A4 stack of colour prints of dogs gleaned from the Internet (Really, 2013) to Jos de Gruyter and Harald Thys’s boy-scarecrow-like Puppet 2 (2014), dressed in gouged jeans and a hoody and hung from a closet hook.

Equally worked through was literature’s lucid relationship to the abject, manifest in works that located writing’s original impulse as lack. See Yael Salomonowitz’s Unsent Unseen (2014), 150 pages of texts drowned in a clear resin bock. Only the first page was visible, its title Index (Nothing exists without me) hovered above a fragmented, gnomic manifesto: ‘The decision is stronger than the addiction …’ Less calcified were three works on paper by Adrian Williams each marrying an image to a hand-writ allegory written in shimmering, sly tones. Of a man studying the hair of his fellow churchgoers, Williams writes: ‘Her hair had curved and bent and lifted from her head spelling a word he couldn’t figure … and now he couldn’t stop looking, searching the frame of every face for a sign.’ If Julia Kristeva notes that abject literature is ‘[n]ot a language of the desiring exchange of messages […] but a language of want, of the fear that edges up to it,’ so does that lexicon contain disparate tones, levity among them.

Wit and want featured equally in Kerstin Cmelka’s brilliant three-part video Mikrodrama #11 (2014). Based on real-life conversations, scripted and remade with actors, these initial dialogues were with aging male artist friends in bars, each depressingly familiar in their narrative: younger girlfriend, lack of interest in ‘growing up,’ self-admiring ennui. As Cmelka patiently asks after the particulars of their life – as women do – they ignore their female interlocutor with base, banal entitlement. When one guy finally asks about her project (the project we are watching), he falls asleep as she answers. These set pieces offered the crushingly familiar sound and image of women debasing themselves for men. But Cmelka’s unashamed ‘documentation’ turned her self-sacrifice into something generative, virtuosic. By focusing on unequal relationships, these works cast the artist apart; an act of communication ended in solitude – perhaps an essential one.

These are not depictions of the most-imaged patriarchy – the abuser, the social conservative, the priest, the bro. Instead, they are the cultured men all around us. Cmelka’s funny, rigorous performance of self-abnegation recalled Kraus among the male intellectuals of I Love Dick, including cultural theorist Dick Hebdige. Hopefully Cmelka’s friends won’t sue her for not respecting privilege’s basic rule against pointing out that privilege. Kristeva writes that the abject is ‘what disturbs identity, system, order. What does not respect borders, positions, rules.’ The feminist through-line of Essential Lone­liness ran deep, but it also generally concerned the artistic creation and self-agency that comes from abjection, the essential solitude at the root of it (as with Cmelka’s work). Read Henry James’s words on the subject: in a 1900 letter he claims that the ‘essential loneliness’ of his life was: ‘deeper than my “genius”, deeper than my “discipline”, deeper than my pride, deeper, above all, than the deep countermining of art.’ Now that’s a feeling.