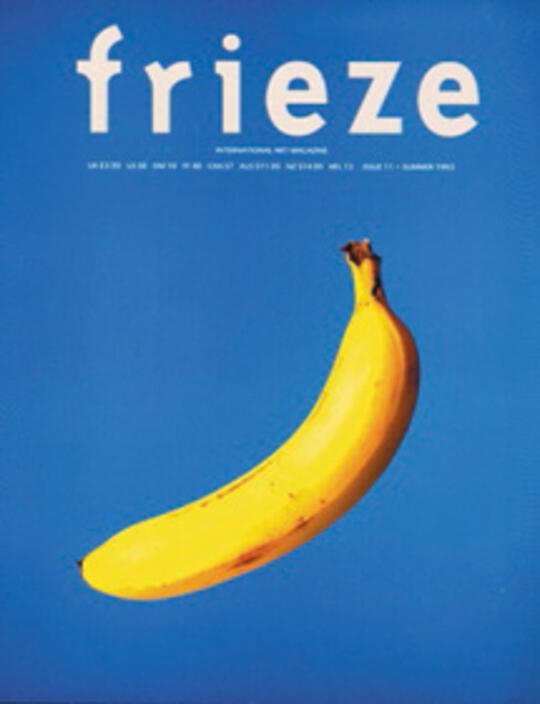 Much has been made of the airmailness of Eugenio Dittborn's airmail paintings, but this is possibly the least meaningful thing about them. Dittborn describes the work as 'Trojan Horses': paintings disguised as letters designed to infiltrate and deceive the 'agents of the Metropolis' who are taken unawares by this apparently innocuous package that opens up to claim a large amount of physical and conceptual space. This is rather hard to believe when the paintings' packages are almost a foot square and have 'An Airmail Painting by Dittborn' printed on the front in block capitals over an inch high.

The fact that their origin in Santiago, Chile, is made immediately visible by hanging the envelopes, with their neatly itemised itinerary in copperplate script, next to the unfolded paintings they contained doesn't even seem important. The envelopes still look like DHL packs - quasi-official, custom printed 'document pouches' with the occasional printed franking label. They don't even have stamps, and as any pre-pubescent schoolboy will tell you, it is the stamp which carries the greatest sense of distance and somehow encapsulates the image of an entire culture, far away, onto which the stamp acts as a tiny window.

Some of the airmail paintings are not even 'airmail' paintings at all: Federal Express International Priority stickers lurk on the back of certain envelopes, hidden from view. Perhaps 'A Major Commercial Courier Painting by Dittborn' didn't have quite the same ring to it. There is a very fine line between commercial courier services and art transport companies, which seems to deate the claims made for Dittborn's work that it somehow circumvents the mechanisms of an art world that seeks a seamless internationalism in which the origin of the art work is rendered invisible. The whole point of the international carriage system, with the exception of Italy, is that, like Wells Fargo, it always gets through. It has become as bland as jet travel. In fact, it is jet travel: it is simply for objects instead of people. Perhaps a real sense of distance could be achieved if Dittborn's paintings got lost more often, turning up at the ICA when the show had closed, months late, after making an unscheduled stop-over in Bahrain because the address got smudged.

In a strange way, many of the figures that appear in the Airmail Paintings seem to have been recently reclaimed from a temporal post restante: The frozen body of a British sailor lost in a failed 19th century Arctic expedition; the mummified body of a pre-Colombian sacrificial victim; Lindow Man, sacrificed in Celtic Britain and preserved in a peat bog, and a victim of the Pinochet regime, preserved by the aridity of the desert and discovered three years ago. All of these figures, lost or hidden in the past, have reappeared like last year's Christmas card from New Zealand turning up unexpectedly in July. Such interrupted journeys appear elsewhere in Dittborn's work: Airmail Painting No 76: To Travel, Travelled, Travelled, Travelling, contains an image of a native of Tierra del Fuego, who was taken to Britain on board the Beagle, on which Charles Darwin was also a passenger. Educated as a Gentleman, Jemmy Button - as he was named by his purchaser - lived in Britain for a number of years before going back to South America: returned to sender, so to speak.

The Histories of the Human Face series contains groups of faces, extracted from disparate sources: drawings by Dittborn's seven-year-old daughter, 20s South American anthropology textbooks and police magazines from the first half of the century. The drawings by Dittborn's daughter seem to unite the images. Many of the photographs of criminals are placidly innocuous: ordinary faces of ordinary people, like the photographs of South American natives, that have been plucked from their environment. The child's drawings make them human again, freeing them from the abstracting, analytical eye of the scientist and policeman's camera. The information contained below the police photographs: birthplace, previous convictions, height and so forth, seems inappropriate - a blinkered view of the world that admits only the most specific of information. This constant modifying of images and words is played out in the earliest of the airmail paintings on brown parcel paper. In these, a simple sentence is repeated down the painting, but each time a few words are added at the end that radically alter the meaning of the phrase. An abstract statement, 'These signs have meaning', becomes a pathologists' note: '...because they allow understanding of how much time the corpse has spent in the water.' Once read in the full form, it is impossible to see the original sentence with the innocence of the first glance. Like Jemmy Button returning to South America after years in Britain, nothing is ever quite the same again. It is this complexity: the interweaving of cultures, contexts, histories and methods of representation, as much as the physical interweaving of surfaces of stitched fragments and printed or painted images, that makes Dittborn's work interesting - not the fact that they come in a plain brown wrapper.