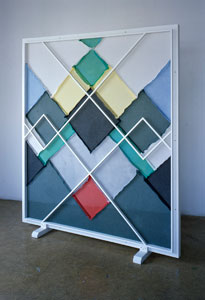 Drawing on a host of references, Eva Berendes’ geometrically patterned fabric screens divided, coloured and softened the small space of Ancient & Modern. The gallery’s name suited this poised show, which put forward a variety of Janus-faced views on Formalism and its various contexts. Two upright, white wooden frames held symmetrical, angular patchworks of green, yellow, lavender, blue and red fabric, while the criss-cross of the white beams steadying the frame on its reverse side showed through the flimsy material. A group of mirrors on the wall reflected the already manifold colours and angles, and were themselves lined and crossed like Piet Mondrian grids. The colours and patterns were neither soaring nor anxious but calm and relaxed. If they were in a shouting match, they would have had the last word.

Berendes, a Berlin-based artist whose show here was her first solo exhibition in London, is one of a number of young artists who have been using Formalism – in sculptures, paintings and design objects – not as strategy but as subject. Her geometrically patterned pieces have as much to do with their own interplay of colours and forms as with evoking the long history of those who have also used such compositions. The word ‘abstraction’ here becomes misleading as a description of her work: rather than abstracting a subject to reveal its inner qualities, Berendes’ more contextual Formalism widens its parameters to become about periods, styles, political movements and events that would be considered extraneous to a Modernist art work. Invited to participate in the 2005 show ‘Communism’ at the Project Arts Centre in Dublin, for example, Berendes showed one of her patterned fabric curtains, evoking the failed political movement through the style that was contemporaneous with its major revolution. In this exhibition the patterns held in the free-standing screens recall Bauhaus architects, Amish quilt-makers, the Modernist fabric designer Lilly Reich, the painter and printmaker Sonia Delaunay and 1980s’ Memphis furniture.

Berendes’ method of leaving the back of these large-scale screens open to view neatly demonstrates the mix of the high and the applied arts apparent in this list. While the front shows a neatly sewn-together pattern of forms – a flat face that stands perpendicular to the floor, held in square white wooden frames – the back demonstrates the making of this quilt, with strings that hang limply almost in a parody of the structure’s verticality. One thinks of Le Corbusier’s aphorism ‘The window is a man; it stands upright’, which Monica Bonvicini memorably pilloried with a sketch of a man standing by a window, erection in hand. Berendes’ screens, meanwhile, take a decidedly moderate view – they are only semi-transparent (or only semi-opaque) and, though emphatically vertical, more closely resemble quilts on beds than wall-hung canvases. If it seems arbitrary to apply a feminist litmus test to Berendes’ work, or to compare her to the more strident Bonvicini, it is because of the ambivalence with which Berendes (literally) frames the issues raised by her quotations. Her work gives off a sense of openness that accommodates clear or perceived disjunctions within the various contexts she evokes: not just between high art and design but also between women’s work – the painstaking, useful sewing of things together – and the high rhetoric of abstraction, perpetrated by a bunch of men bossing builders around or standing in their studios calling their work ‘Suprematist’. Berendes’ work really doesn’t deal with any of these opera buffa scenarios; it rather catholically refuses contradictions, and – with perhaps some irony – allows the work to speak for itself. The fluidity evoked by the semi-transparent fabric, its loose quilting and the tenuousness of its attachment to the frame suggest a history that is not yet fixed but which is open to continual evolution. Perhaps this is why her work gives the impression of both being quiet and having the last word – it knows that Formalism is still moving on.