Every Future Has a Price

Organized by Anne Livet, in collaboration with Alan Belcher and Peter Nagy (two artists who co-founded Nature Morte, a fertile gallery of the period), the original ‘Infotainment’ (1985–87) was a touring exhibition honouring an early-1980s East Village movement in New York that emerged in the wake of the ‘Pictures Generation’. Often thought of as ‘Pictures Plus’, the ‘Infotainment’ group borrowed the style and strategies of mass-media culture, but evinced a modernist insistence on the art object. It is as if this slightly younger generation of artists realized it was possible to enlarge the Marlboro man and put him in a gallery, then, having digested that revelation, decided to apply the resulting sensibility to traditional artistic media.

Elizabeth Dee’s expanded remounting of the exhibition, titled ‘Every Future Has a Price: 30 Years after Infotainment’, after a 1988 essay by artist/critic Ronald Jones, is notable for displaying, in a vitrine near the gallery entrance, one of the two or three best lines of instant art criticism I’ve ever encountered: ‘We think op art is highly underrated, Bridget Riley. That’s corporate psychedelia, the orgasm of modernism.’ The quote is from Nagy, interviewed in REAL LIFE magazine, and for it he has my undying respect and gratitude.

Far from orgasmic, the ‘Infotainment’ scene, which feels very transitional from this historical distance, was more like furtive foreplay with mass-media culture, which would eventually climax with the splashy neo-pop ejaculations of Jeff Koons and Takashi Murakami. As with the earliest sound films of the late 1920s and early ’30s – in which actors huddled closely around standing lamps and potted plants to deliver their lines into concealed microphones – viewers of the remounted ‘Infotainment’ can clearly identify the baby steps towards a new paradigm in aesthetics and marketing. How else to process Haim Steinbach’s Un-Color Becomes Alter Ego (1984), consisting of two Yoda heads and a boom box, which the artist deploys in a similar manner to that in which Andy Warhol used Campbell’s Soup cans? The objects, dusty and dirty, suggest Mike Kelley-like abjection, but offer a visual foreword to the gleaming, lacquered kitsch of Koons’s Michael Jackson and Bubbles (1988), a work similarly devoid of apparent ‘meaning’.

Peter Halley, whose work always struck me as corporate minimalism, brings characteristic, hotly coloured coolness to Rectangular Cell with Conduit (1983), a tri-tone, two-field painting, half of which employs Roll-a-Tex, his beloved textured architectural paint. Philip Taaffe’s large painting Undercurrent (1983) echoes Nagy’s love of op with undulating waveforms, which vibrate the eye to the extent that the viewer feels seasick. Gretchen Bender’s Wild Dead (1984) – a two-channel, four-monitor video work – cycles through random television clips from the era, an animation of the word ‘VIDEO’ being cut with a razor to reveal the word ‘DROME’ underneath, and primitive, proto-CAD wireframe computer graphics by artist Amber Denker. Of all the pieces in the show, Wild Dead feels the most of its time, delivering public-access television aesthetics corroded by postpunk desolation. 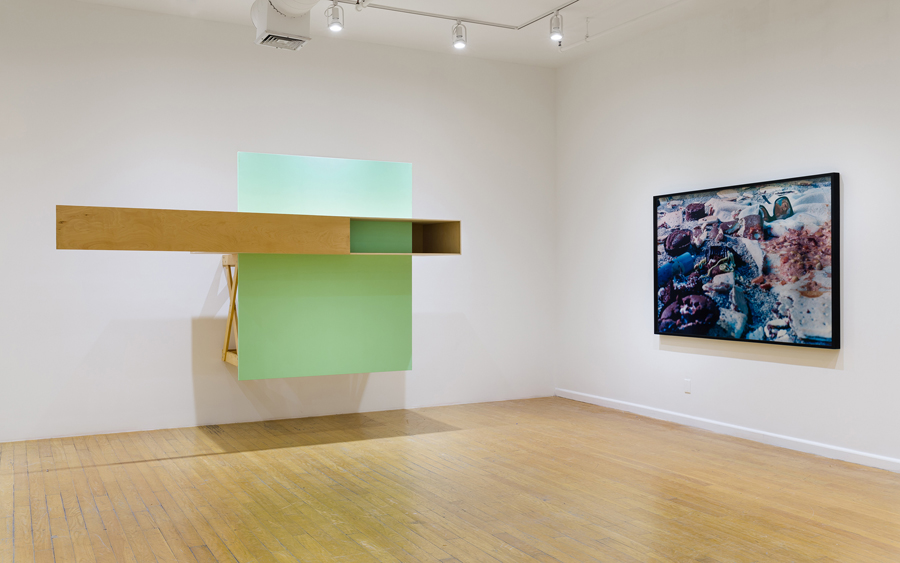 But it is Cindy Sherman who literally takes the cake (and the show) with her photograph Untitled (1987), a low-angle close-up of the obscene detritus of a two-year-old girl’s birthday party, complete with crushed chocolate cakes, noodles of brightly coloured frosting and a puddle of vomit, all strewn over an aqua-hued rug that renders the objects on its surface as nautical flotsam and jetsam. The piece works equally well as representation, abstraction, painting or photograph, and it rewards long contemplation. This, unfortunately, is less frequently the case with works by the other ‘Infotainment’ artists, who are often just ‘tracking the thrill’, as Bender described it, of the tsunami of media images in which we all swim, hoping to build life-savers and rafts that would both look good on the surface and allow them to keep surfing the wave.

Andrew Hultkrans is a writer based in New York, USA. He is the author of Forever Changes (Bloomsbury, 2003).