As a kid in Canada, I learned to play a scatological game with money. Back then, Queen Elizabeth II – still the head on all Canadian coins – graced the one-, two- and 20-dollar bills. We kids never got our hands on anything more than one dollar. Before spending the cash on sweets, we folded it here, there and voilà: Her Majesty’s face looked like a naked bum. The trick still works on contemporary British notes. (Hint: it’s all in her chin.)

Our game was like a Commonwealth variation on the Freudian link between gold and faeces. Take the double entendre of ‘throne’: the sovereign’s seat and the toilet bowl. But as children, little did we know that our cherished Canadian currency would soon turn to shit. As I grew older, the dollar kept shrinking, falling from 90 cents to 80 cents to 70 cents to an all-time low of 61 cents in 2002. Its value was always measured against the US dollar, the real money used south of the border.

Our small notes were turned into hard cash to circulate longer. When the one-dollar bill became a coin in 1987 – with Queen Elizabeth II on the head and a loon waterbird on the tail – it was dubbed the ‘loonie’: a collective admission that our currency was going crazy. When the two-dollar bill was coined in 1996 – the Queen and a polar bear – it became the ‘toonie’. Together, these denominations evoked Looney Tunes, the American animations invented in the Depression era. The US measured our devaluation while describing our cartoon cash: something Bugs Bunny might use to buy carrots. The Queen – a silent yet omnipresent witness to the decline – didn’t look funnier, just older. Reflecting the downs of the dollar, her face has aged more on Canadian than on British currency. These days, it’s harder to get a good bum out of a Canadian 20 than a British fiver.

This tale is but one chapter in the history of faces and money. Their alliance dates back to antique coins, which became collectibles in Renaissance cabinets, but gradually disappeared into the archives of the public museums because the coins’ size and double-sidedness make them difficult to display for crowds. Marshall McLuhan may have dubbed cash ‘the poor man’s credit card’, but for Roman emperors coins doubled as mass media: with an effigy of the ruler on one side and a slogan on the other, often linking him to a popular god (today’s commem­orative coins reflect this prototype of propaganda). In light of this ancient link between portraits and precious metals, it’s striking that silver was used for most of the first century of photography, producing feather-light ‘coins’ for the people with their own portraits on them.

Another chapter in the history of faces and money – closer to our own debt-ridden era – belongs to Étienne de Silhouette (1709–67), although his countenance never graced a coin. He lent his name to the craft of paper cut-out portraits, which has been used by artists as diverse as Felix Droese and Kara Walker. In 1759, Silhouette served as finance minister under Louis XV, whose regime was crippled by debts from the Seven Years’ War. In an attempt to remedy this situation, the minister tried to tax aristocratic luxuries for the first time – a task that led his many detractors to coin a new term, ‘à la Silhouette’, to describe anything done cheaply, including the paper portrait profiles which aristocrats regarded as the poor man’s painting and sculpture. Once dismissed from his post, Silhouette retreated to his castle in Bry-sur-Marne where the walls were rumoured to be covered with drawings of countless shadows. With his paper profiles and taxes on luxury items, Silhouette may have anticipated the eclipse of the sovereign’s features on coins and the fall of the absolutist economy, if not the shift from precious metals to paper money for the masses.

That brings us to the troubled euro notes, which don’t have faces on them but drawings of generic bridges, arches and gates in various styles, from classical to modern. In short, these architectural passages exist in a Utopian nowhere, perhaps alongside the unpaid taxes on the transactions of international finance. It was telling that the euro member states could design only the backs of their coins, turning their histories into small change. Now, the euro’s passages carry transactions to manage debts, which will rob the states of their sovereignty for decades to come.

Don’t think a national currency – free to fall and rise – is the solution. Sure, the Canadian dollar is now on a par with the US greenback. But it’s hard to know if this parity is a result of speculation or a recovery that took 40 years. And the Queen? This year, she’s celebrating her Diamond Jubilee along with the Royal Mint, which issued a commemorative five-pound coin with only two heads: a portrait of Elizabeth II today and one of her at the start of her reign. This remarkable coin makes history circular while leaving no room for tails, nor for chance. Like its Roman predecessors, the coin has a Latin slogan: ‘Dirige Deus Gressus Meos’ (May God Guide My Steps). And help the rest of us. 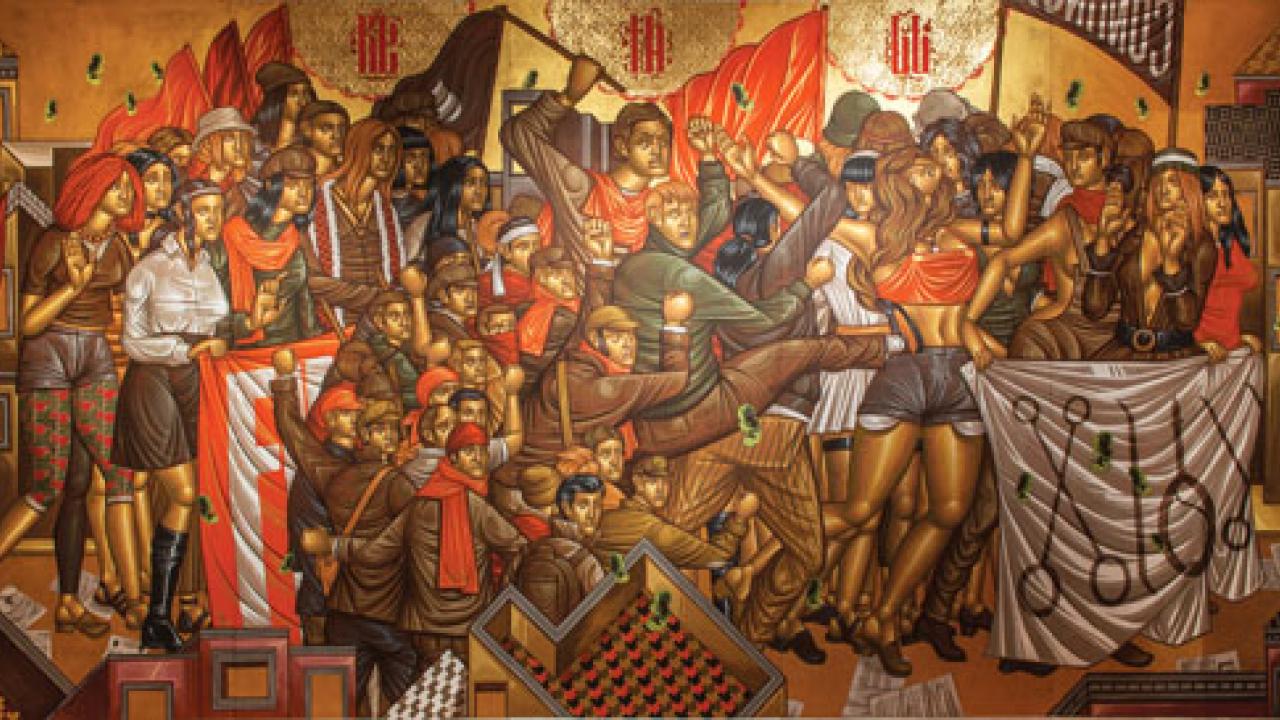 Since the start of the Greek debt crisis in 2010, austerity measures have had a profound impact on life in the country. From biennials to occupations, Ben Davis and Ara H. Merjian reflect on how the art scene in Athens has responded