‘We in dis bitch, finna get crunk. Eyebrows on fleek, dafuq.’ Just four months after a Vine video of black schoolgirl Kayla Newman saying the words ‘on fleek’ and stroking her eyebrows was posted online, the phrase had been culled and spun into marketing speak on Taco Bell and IHOP’s Twitter feeds. (‘Pancakes on fleek.’) The meme-ification of this particular black female, as well as countless others (Kimberly ‘Sweet Brown’ Wilkins, who escaped from an Oklahoma fire and proclaimed on camera: ‘Ain’t nobody got time for that,’ when interviewed by a reporter, is a classic example) shadowed Martine Syms’s recent video, Notes on Gesture (2015), the centrepiece of her exhibition ‘Vertical Elevated Oblique’ at Bridget Donahue Gallery, New York.

Taking its title from a Giorgio Agamben essay written in 1992, the video is a series of short clips of an actress with braided hair, performing against a purple backdrop. She is responding to dramatic cues and title cards that appear on-screen such as ‘WHEN DEY GOT YOU FUCKED’. The actress’s range of responses, expressions, hand movements and spoken phrases (‘C’mere, I’m talking to you’), are looped fast and repeated a number of times, suggestive of GIF and Vine video formats, as well as the ‘reaction video’ genre (footage of people excessively responding to anything from a new Britney Spears video to some shocking, gross-out footage), all of which have become popular online the last decade or so. That the actress’s miniature performances are a collection of dramatic responses to hypothetical situations gives the video the feeling of being an outsourced form of public feedback, a kind of Greek chorus that responds so you don’t have to.

Syms gave particular focus to the language of the hand. A wagging ‘no-no-no’ finger, seen as often in social situations as it is in music videos, is accompanied in Notes on Gesture by the looped singsong vocal, ‘I don’t lu, I don’t lu, I don’t lu’, which finally breaks into the phrase ‘I don’t love you,’ before being replaced by a new cycle. Drawing on British physician John Bulwer’s 1644 text Chirologia: Or the Natural Language of the Hand, Syms suggests a complex vocabulary of hand movements (or, at least, a coded set of gestures), some of which may resonate across centuries, while others remain specific to an individual or time.

A connecting tissue in Syms’s work concerns what it is to ‘read’ or be ‘read’. (The artist also founded Dominica, a publishing imprint dedicated to exploring blackness in visual culture.) ‘Vertical Elevated Oblique’ included C-stands used as workhorses for lighting, fabric, showcards and other apparatus in the film industry (Syms grew up in Los Angeles around this business and remains based in the city) strung with found photographs in which several hands were pictured forming the kind of gestures seen in her video, while items of the artist’s clothing printed with phrases were also slung over these tubular frames, suggesting an absent body. Two other sculptures quietly carried phrases associated with particular articulations of black identity. A false theatrical wall mirroring the backdrop of Notes on Gesture was painted in the colour purple, alluding to Alice Walker’s eponymous 1982 novel and the subsequent cinematic adaptation starring Whoopi Goldberg and Oprah Winfrey, while two bases for tables formerly belonging to one of the artist’s relatives glowered in the shape of two black panthers. Taken together, the impression of the entire show was that of a set or production studio, a general environment of image production and mediated forms of identity. 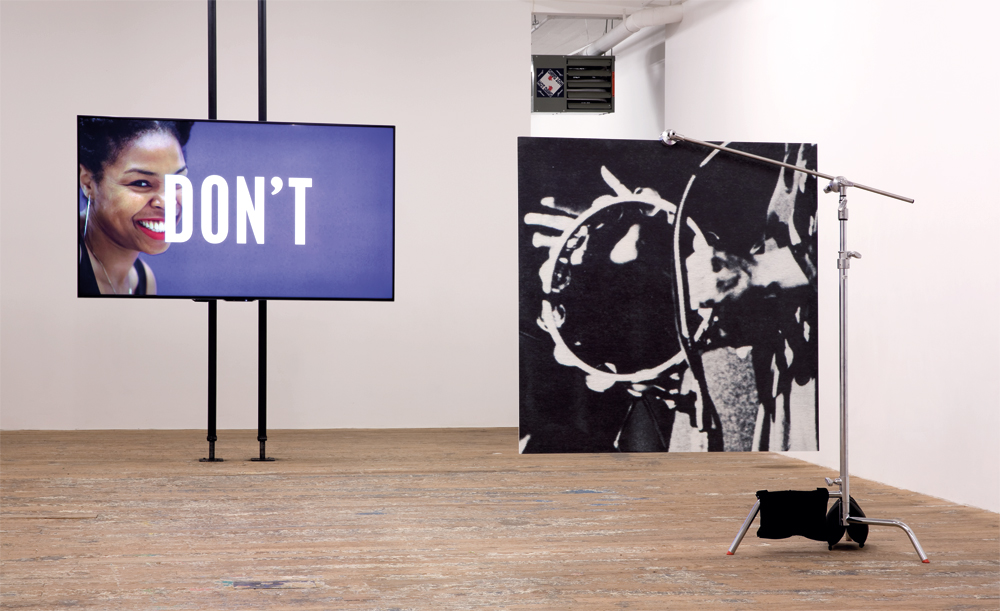 The production of the self in response to screen images is another ongoing concern for Syms. An early work, My Only Idol is Reality (2007), used found footage from season one of the MTV show The Real World (1992), the canary in the coal mine for the current era of mediated self-publicity. S1:E1 (2015), Syms’s contribution to ‘Surround Audience’, the 2015 New Museum Triennial, was both a sketched pilot for a TV series entitled SHE MAD, set to star an aspiring artist called Martine, as well as an analysis of key moments in the production of blackness on television, and the way in which certain shows reflect and contribute to the formation of a society. The pilot included lo-fi footage and cheap production values, deliberately signalling immediacy and ‘realness’. Syms plans to shoot an episode of SHE MAD, taking as a starting point Thomas Edison’s 1907 film Laughing Gas, starring a woman who visits a dentist and goes through the rest of the day in fits of laughter. The film is notable for its starring actress, a woman of colour, whose gestures, notes Syms, appear over the top, until she enters a church and her flailing and hysteria fits in with the behaviour of the congregation.

The press release for Syms’s latest show noted that she had been inspired by the riff: ‘Everybody wanna be a black woman but nobody wanna be a black woman,’ which is a tweaked phrase from the ‘Ask a Black Dude’ sketch on Dave Chappelle’s show. This bleak, comic ontological observation pits wanting to ‘be’ (as in adopting, copying, appropriating, acting like) against ‘being’ (as in living as, and all it entails). Syms points to the implications of this nullified equation, particularly on how being the carrier of gestures makes one a support or an apparatus for the dominant society, even if it creates visibility. Or, to put it as Agamben does in his essay: it’s on screen that a society which has lost its gestures attempts to reclaim and record what it has lost. 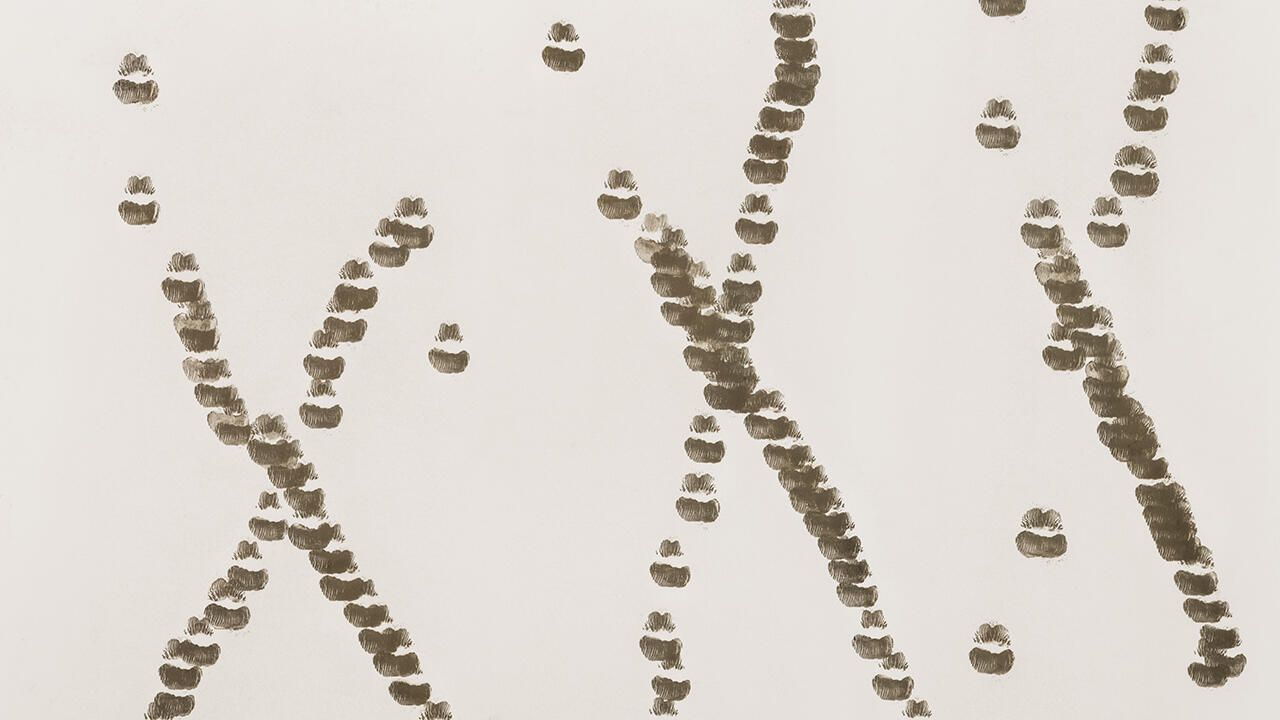