The historic layers of Beirut’s neighbourhoods; the fine line between collaboration and individual practice

An elegant balcony curves around the apartment building where Marwa Arsanios lives and works in Beirut. The building stands on a street that ends in an abandoned plot of land, all tangled weeds and rusted cars; it’s a classic example of 1950s vernacular architecture – not exactly Mediterranean Modernism, but a fine exercise in breaking up rigorous right angles with circular details. Arsanios lives on the second floor, but the view from her balcony is surprisingly, almost panoramically, complete, the shape of it perfectly matching a gradual bend in the not-too-distant coastline.

Sweeping to the right is the waterfront skyline of downtown Beirut, with its luxury towers stacked up side-by-side; a stretch of reclaimed land, mostly empty but slated for a spate of high-end real estate projects; and then the port, the sea and a hint of mountain looming above the city. To the left are narrow streets and jumbled rows of old, low-rise buildings, with an audacious, 24-storey high-rise interrupting just about everything. Under construction for many years now, the new building was designed by Bernard Khoury, enfant terrible of Lebanese architecture. It has come to be known as ‘Le Monstre’ and is the kind of structure that promises to cause rents to skyrocket and to relegate artists, writers and other creative types to regions beyond Beirut’s city limits.

Arsanios moved here six years ago, when she founded the 98weeks Research Project with her cousin, the writer and curator Mirene Arsanios. In 2009, they opened the 98weeks Project Space in Mar Mikhael, a district that was quickly absorbing an onslaught of new studios, cafés, design boutiques, bars and restaurants. Aware that they were inevitably contributing to the area’s gentrification, the Arsanioses organized a workshop in 2010, which took the history of Mar Mikhael as its subject. They dug into the many layers that make up the neighbourhood’s curious urban density, including the refugee camps – first Armenian, then Palestinian – that were repeatedly destroyed by illness, fire and war. 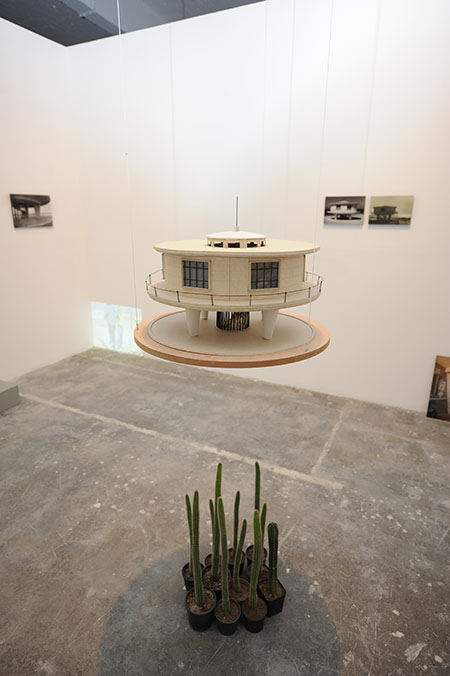 It isn’t always clear exactly where Arsanios draws the line between her collaborative work with 98weeks and her individual practice as an artist, but these days her studio is, for the most part, overwhelmed by the latter. On an unseasonably warm winter’s day, research material related to several different art works, all in various states of progress, is tacked to a long white wall streaked with vivid green paint that seems to have been applied by hand or, more specifically, by someone’s fingers. ‘An experiment,’ she says with a smile.

Originally trained (and employed) as a graphic designer, Arsanios studied theatre and fine art and made drawings. She tucks a few works in pen and pencil on paper into her portfolio. Some are sweet, figurative and a little adolescent; others are jangly and deliriously abstract, based on old maps of Beirut, which is clearly a recurring theme. She only really emerged as an artist of considerable promise, however, when she began making video animations. Works such as I’ve Heard Stories 1 (2008) and I’ve Heard 3 Stories (2009) shared many of the same urban, architectural and political preoccupations of her older, more established peers, but they looked like nothing else that was being made in Beirut at the time. For one thing, they were stylistically rough. For another, they were unabashedly feminist. For another still, they delved into the vague matrix where political power and crimes of passion meet, which is something only Akram Zaatari, in his very early videos, has touched on before in relation to Lebanon.

I’ve Heard Stories 1 revisits the tale of a politician who allegedly killed his lover in a grand old Beirut hotel, the Carlton, which has since been torn down. I’ve Heard 3 Stories likewise returns to an account of a cabaret dancer who supposedly disappeared from a beach resort, the Acapulco, which is now inhabited by refugees. Stuck to the wall in Arsanios’s studio, next to documentation of a performance in Tokyo about the Japanese Red Army (which has a strange and intimate connection to Lebanon, one of its members being the only foreigner ever granted political asylum in the country), are several images of models and plans for a public housing project that was meant to be built on the land next to where the Acapulco once stood. Arsanios found those images in an archive in Athens. Given that she’d already made a maquette of an incredible seaside chalet for the installation All About Acapulco (2010), she decided that if she was going to do anything about the adjacent public housing project, then she wanted to actually build it – not a model of it, but the thing itself – as a means of side-stepping melancholic and nostalgic gestures and reactivating a kind of Modernist imagination to see where it might end up, however many decades later.

And yet, just when it seemed Arsanios could probably spin new work from old architecture forever, she started developing a radically different set of projects related to public rituals of reading, which resulted in several pieces involving books, texts and, more recently, performances, such as a collaboration with the artist Lawrence Abu Hamdan, which involved a marathon reading in three cities (Beirut, Ramallah and Jerusalem) of Emile Habibi’s influential novel The Secret Life of Saeed, the Pessoptimist (1974). Much of that work stems from Arsanios’s abiding interest in vintage issues of a literary journal from Cairo, Al-Hilal (The Crescent). First, there was Words as Silence, Language as Rhymes (2011–12), which consists of two books that effectively re-edit Al-Hilal in a deliberately crude way to allow Arsanios to ask, in a refreshingly impetuous way, what happened to the promises of a long-gone era (the 1960s), when an ascendant ideology of Arab nationalism was pledging the moon and stars and women’s liberation to its people. Then came Olga’s Notes (2012), which presents an imagined conversation between the artist and her grandmother about colours, collage, language and the older woman’s commitment to a political cause (it followed a similar work that imagines a conversation in a belle époque Cairo café between Arsanios’s grandmother and Karl Marx).

On the artist’s desk is a draft copy of Love at First Sight: An Encounter Between the Writer and Jamila – a book documenting the artist’s fascination with Jamila Bouhired, a legendary figure from the Algerian war for independence from France and a frequent topic of discussion in Al-Hilal – which is related to another performance, Have You Ever Killed a Bear, or Becoming Jamila (2012). In one sense, all of this is prep work for a film Arsanios is hoping to complete in Cairo this year, with the Tunisian actress Hend Sabry playing Jamila. In another sense, it is a sumptuous and nimble strategy for getting out from under the tremendous weight of Beirut. ‘There are so many things you can take from Beirut,’ Arsanios says. ‘But you can’t do what you want with them. The city isn’t generous. It’s too present and it’s too much about itself. Whenever you take material from Beirut, it’s as if you have to give it back in a certain way. And it isn’t always a fair trade.’ Standing on that balcony, though, it’s easy to see why so many artists would be tempted and why so many have tried.

Marwa Arsanios is based in Beirut, Lebanon. In 2012, she was the recipient of a special award from the Pinchuk Art Centre’s Future Generation Art Prize; her work was also included in ‘Jerusalem Show’, East Jerusalem; ‘Subversion’, Cornerhouse, Manchester, UK; and ‘In Other’s Words’, NGBK, Berlin, Germany. In 2013, Arsanios is participating in the Home Works vi forum in Beirut; her work will also be included in the Future Generation Art Prize’s event at the 55th Venice Biennale, Italy; and in ‘Selling Snails in the Muslim Neighbourhood’, Munster Kunstverein, Germany.