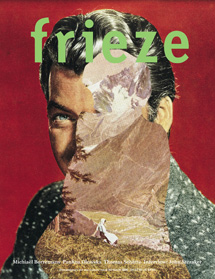 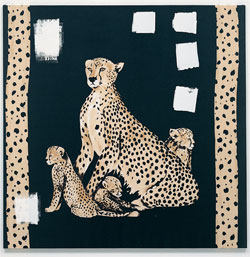 Curated by Yilmaz Dziewior, ‘Formalism: Modern Art, Today’, took to task the dichotomous relationship of form and content and considered, as the title ironically implies, how the idea of ‘modernity’ manifests itself, in a post-Postmodernist age.

Of over 20 artists included in the show – most of them German, some American, some British, and almost all in their 30s – Michael Krebber was the most mature, apparently included for his consistent interest in questions of form despite his close ties with the New York and Cologne neo-Conceptual scene of the early 1990s. Two of the paintings shown, both entitled Ich habe nie Begleitung. Ich habe Magenprobleme, (I Never Have Company. I Have Stomach Aches, 2003), used a bed sheet and pillowcase printed with a mother cheetah and her cubs as their supports. The animals are outlined in black, and a number of roughly rollered white rectangles are arranged around them. Nonchalantly bridging Sigmar Polke’s experiments with found materials and the anti-painting of younger artists such as Sergej Jensen, they negotiate the divide between abstraction and figuration in an apparently effortless manner. Jensen’s paintings, also included here, exhibit a spareness that favours processes of deterioration over painterly addition; in Untitled (2002) a chicken-wire fence leaves its ghostly imprint on the raw linen support, like a contemporary urban relic. Tomma Abts’ paintings take the opposite approach, with their density of texture, colour and composition. Thick surfaces with ridges of built-up oil paint and colours tainted with the knowledge of previous tones create tight nodes of activity that suggest a certain kind of compositional inevitability while simultaneously calling attention to

Reviews
Marina Saleme Paints the Contours of Her Mind

Reviews
Marina Saleme Paints the Contours of Her Mind