From the start, the curator of the Fourth Moscow Biennale of Contemporary Art, Peter Weibel, set out to make a visitor-friendly show, carefully informing the press that its main project, ‘Rewriting Worlds’, would not only be about multimedia and interaction (as one might have guessed, based on Weibel’s history of involvement in performance art and post-punk music, along with his intense interest in interactive art as Director of ZKM in Karlsruhe). He was also quick to stress that painting and drawing would not be excluded – though Weibel’s idea of painting, apparently, is that it should be figurative and historical, hence his inclusion of a couple of Neo Rauchs, a Gerhard Richter and a suite of technology-meets-Hans Holbein works by Taisia Korotkova. Walking through the exhibition one wondered if Weibel meant to construct a mirror for Moscow’s tech-gadget-wielding middle-class, in an attempt to show them that contemporary art could be relevant to the everyday fabric of their lives. And with that, his Biennale walked a fine line between timely immediacy and populism.

‘Rewriting Worlds’ indexed a catalogue of conversational topics amongst higher-educated, middle-class Russian citizens. There was no unifying message here except, pardon the pun, ‘the media’ – as a means of artistic expression, but also as the means by which current news is disseminated. Most people in Russia had heard, say, of Ai Weiwei’s arrest; consequently, Weibel included the artist’s video Beijing: The Second Ring (2005), showing Beijing’s motorway plagued by traffic jams, just like those on Moscow’s own roads. Indonesia-born Tintin Wulia’s installation Lure (2009) gave visitors an opportunity to fish a foreign passport out of a glass box – a work perfectly tailored to those considering emigration, a hot topic among Russia’s liberals. 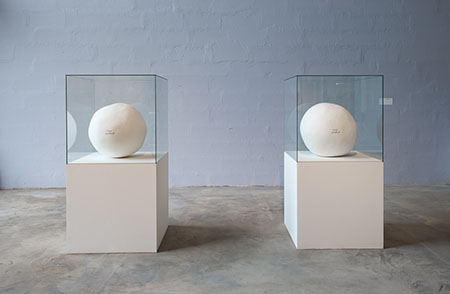 In the larger venue of the ArtPlay Design Center and on a smaller scale at the TSUM Art Foundation, ‘Rewriting Worlds’ took the form of independent works placed in a labyrinth of rooms within rooms, which were either too huge or too claustrophobic: Rauch’s large canvases, for instance, suffered in the three-square-metre room they were given. As a result of this structure, almost no constellations could be formed among works. The show did not flow, but rather seemed to stop and start. Viewers got their first taste of interactivity early, with two works by the popular Russian collective Electroboutique. In Big Talking Cross (2011), a visitor was instructed to bow before a flight-departures board in the shape of a cross. After the viewer performed the ritual, the flight information changed. In Gas Mask (2011), viewers stood in front of a screen showing an animated, post-apocalyptic landscape. If you stood before the work topless, the sensors would react to your skin tone with a change of setting, projecting you into a slightly acid-coloured tropical paradise. Both works attempted to fuse technology with universal themes, but ended up providing not much more than mindless fun.

Weibel’s choice of title set a Postmodern tone, with a polemic nod to Daniel Birnbaum’s 2009 Venice Biennale, opting for ‘rewriting’ worlds rather than ‘making’ them. The suggestion that reality is not to be re-made, only revised or corrected, is not a new idea for Russia, where history has been rewritten roughly twice in the last 20 years. The political aspect inherent in rewriting – particularly in terms of maps and societies – was only addressed at the end of the exhibition, in Richard Hamilton’s work showing the shrinking borders of Palestine since 1947 (Maps of Palestine, 2011). ‘Rewriting’ is not that far from ‘making’: when you carve something out of what came before, you create a new reality even if there are levels of history beneath it. Unfortunately, in ‘Rewriting Worlds’, creation was reduced to commenting, mocking and redressing the past and present. Kijong Zin’s Slaves in the Gulf (2010), for instance, comprised a series of miniature dioramas based on paintings by Ilya Repin, a Russian realist artist famously mishandled in Clement Greenberg’s 1939 essay, ‘Avant-garde and Kitsch’. Zin makes Repin’s protagonists interact with the machinery of oil production. In one diorama, he recreates Repin’s burlaki (workers who dragged small ships along the rivers with a rope on their shoulders) pushing a Shell truck. There can exist no new forms for new politics (or new feeling), the piece seems to say: everything can and should be recycled in order to create contemporary meaning. And, in fact, the success of ‘Rewriting Worlds’ as a whole depended on whether you subscribed to this idea. If you possess a hint of belief in art’s autonomy, however, the Fourth Moscow Biennale looked too reliant on this recognition effect, and too pedestrian for its own good.