frieze magazine is delighted to announce Linda Taylor as the winner of this year’s Writer’s Prize. Taylor has been commissioned to write her first review for frieze magazine, and will be awarded £2,000.

frieze received hundreds of entries from around the world. This year’s runner-up is Debra Lennard, for her review of ‘Last Seen Entering the Biltmore’ at South London Gallery.

A hole that leads nowhere opens Kafka’s unfinished short story, ‘The Burrow’.  The hole is one of many aborted false starts in the narrator’s attempt to build a refuge from the perceived menace of the world above ground.  Robert Filby’s show at Piper Keys is full of such false starts and best laid schemes.  A bronze cast of an abandoned rabbit hole, no more than two feet deep,  sits on the concrete gallery floor; a hole that not only leads nowhere, but ceases to be a hole.  Its solid manifestation denies its potential to become anything more than a perpetually unaccomplished intention.  A kind of anti-Wonderland, Uncompleted Burrow refuses the magic of imaginary adventure and offers no sanctuary.  Exposed, above ground, the dark unfinished bronze resembles a relic in reverse; a profane souvenir of its own unfulfilled future.

To the uninitiated the location of Piper Keys lends itself to the metaphor of a secret burrow.  In Kafka’s story the abandoned hole is left deliberately unfilled; a decoy to divert attention away from the concealed entrance to the real burrow.  From the street, the gallery’s whereabouts is signalled solely by its post box (a small hole).  To its side a door within a larger industrial door leads across a courtyard into a dimly lit corridor, lined on one side with near-identical doors; a corridor which practically obliges a Kafka allusion.  Piper Keys lies behind one of these doors, housing the gallery and the living space of the gallerists.  The conflation of private and public; inside and outside, offers sympathetic ground for the concerns of Filby’s work.

The gallery floor plan is returned to the gallery in the form of a rug; perhaps a reference to the gallery’s domestic arrangement.  But Rug is also contiguous to Filby’s earlier work.  The weave of the rug resembles the forms of Mood Boards, which appropriate a visual brainstorming method, commonly used in design and advertising.  Conventional mood boards anticipate the overall ‘feel’ of the final product, or project, through collaged arrangements.  Filby’s ‘boards’, however, have no end in sight.  Like the abandoned hole, they are false starts; unexecuted plans; testaments to an eternal maybe.  The permanence of their incomplete status is fixed by the closing down of the collage’s layered plane into a single, flat print.  Similarly, unexecuted plans for the show are closed into the flat weave of the rug - folding the hypothetical into the physical.

The word weave, like the word burrow, is a both a noun and a verb – a thing and a process.  Is the concrete noun superior to, more real than, the verb?  Is the product more satisfactory than the process, or the pre-process, of the false start?  Kafka’s story implies not.  The burrow is subject to constant revision, regret and modification.  The impossibility of satisfactory conclusion is anticipated, a priori, by Filby’s closing down of progress at an early stage in the creative process.  With its refusals and dead, or looping, ends, this work seems to corroborate that which David Foster Wallace describes as the central Kafka joke:  ‘That our endless and impossible journey toward home is in fact our home.’

As Uncompleted Burrow refuses the magic of wonderland, so Ghosts denies the other-worldly.  Eight smiley ghosts, their form taken from glow-in-the-dark stickers, float behind a sea of black copier toner on pale green office paper - like an impudent approximation of Goya’s ‘Ways of Flying’.  The imagery of the sticker ghosts is already far removed from the mystical, and these ghosts deny even the most prosaic of wonders; they do not glow.  A strained expectation comes to nothing.

The burrow is an exercise in non-engagement; a desire for reclusive autonomy.  Filby’s work is similarly dis-engaged.  Operating within its own internal logic it appears largely indifferent to its external reception.  Filby has previously made sculpture for cats – those supreme masters of inscrutable indifference.  But this indifference, like the bur-rower’s decoy hole, may be a ruse so subtle it risks defeating itself – happily for us.  As cats tend to favour the ambivalent over the enthusiast; and the silent tend to invite ex-aggerated verbosity; so the taciturn nature of this work may, paradoxically, elicit defiant fascination in its non-feline audience.

There are not one, but three Hollywood tour operators touting walk-throughs of the Biltmore Hotel: the last place where waitress and aspiring actress Elizabeth Short – later recast by press as the ‘Black Dahlia’ – was seen alive on January 9, 1947 before her body was discovered, halved at the waist, in an overgrown plot of land south of the city centre.

Told and re-told along its steady descent into camp performance for tourists, this sordid tale of how a film-noir plotline topsy-turvily invaded the reality of a town dedicated to silver screen fantasy has lent its narrative to ‘Last Seen Entering the Biltmore’: a group exhibition at the South London Gallery that considers the theatricality of recent art.

The gone-missing subject of the exhibition’s title could well be naivety, nowhere to be seen in the work of the nine artists in the exhibition’s international cast. Split broadly between two generations, Richard Artschwager, Barbara Bloom, Guy de Cointet, Nan Hoover and William Leavitt play the ancestors; Richard Healy, Allison Katz, Darius Mikšys and Ola Vasiljeva their descendants. With the exception of de Cointet’s ACRCIT newspaper (first printed in 1971), the earliest works presented date from 1980, rooting the exhibition in a postmodern moment of heightened cultural self-consciousness, the intellectual legacy of which the younger generation – all of whom are showing work made this year – are evidently still negotiating.

The knowing metatheatre of these artworks is paralleled by curator Anna Gritz’s staging. Announced in the foyer like a play or film by Allison Katz’s commissioned title posters, the exhibition unfolds inside the gallery like a stage set of pointedly fake walls and curious props. Each artist’s work is presented individually, without wall text, facilitating immersive tableaux. Juxtapositions between installations are as carefully choreographed as cinematic montage: the act of entering the gallery is mirrored on other side by two further thresholds: Richard Artschwager’s Relief (2006) – a sculpture of a matte grey doorway that defies its appearance as such; floating inches off the ground, its false perspective pushing outwards into the room, rather than leading away from it – and Nan Hoover’s Color Pieces (1980): a tightly-cropped film of a door being opened and closed softly, slowly by a sheathed arm. As the limb moves out of shot, the image descends into spatial abstraction, leaving only shifting light and shadow behind. The pairing of these door mirages serves as a statement of intent for the exhibition as a whole: now that we’ve arrived at the hyper self-conscious state represented by the Biltmore, finding a way out won’t be easy.

Gritz’s point is not simply to show how self-reflexive art has become over the last three decades – that’s evident enough in the nudges and winks reciprocated between works separated by both time and geography (among the nine artists, there are two uses of code, three stage sets, and three appearances of artificial tropical palms). Surpassing what’s already known, the more recent works in the exhibition address the question, what now?

London-based Richard Healy offers one line of thought in his two-part presentation. His blown-glass sculptures Albert Goldman’s Martini Pitchers (2014) stand prop-like on a table, each adorned with several dangling keys hinting at offstage bedroom-hopping. Behind the scenes, on the other side of the slatted pine wood framing the pitchers, Healy’s video The Pines (2014) plays on loop: a virtual fly-through of Horace Gifford’s 1960s Fire Island housing complex designed for the holidaying gay community: Gifford’s showers were multi-person; windows ran floor to ceiling. Healy’s animation of this stagey architecture announces its own artifice, passing directly through tree trunks, the camera’s perspective rolls to reveal that rooms peter out into nothingness. The protagonists of Fire Island’s pre-AIDS golden era too are missing: their presence signalled only by rumpled bed cushions, dropped towels. Healy wields the finish of his carefully crafted video as a foil against itself, veiling – and drawing attention to – unspoken raw emotion.

Lithuanian Darius Mikšys, the last artist encountered through the exhibition’s choreography, leads another way. At his request, Mikšys’s role is performed by an understudy. Staging the collapse of an artwork under the weight of its own self-consciousness, Art Plays Itself (2014) was made for the exhibition by artist and gallery technician Beth Collar. From underneath her tented theatre drape, a roughly hewn clay figure is just visible: a golem perhaps, requiring a breath from outside of the Biltmore’s close atmosphere – ideas saturated with the moisture of repeated respiration – to bring it to life. 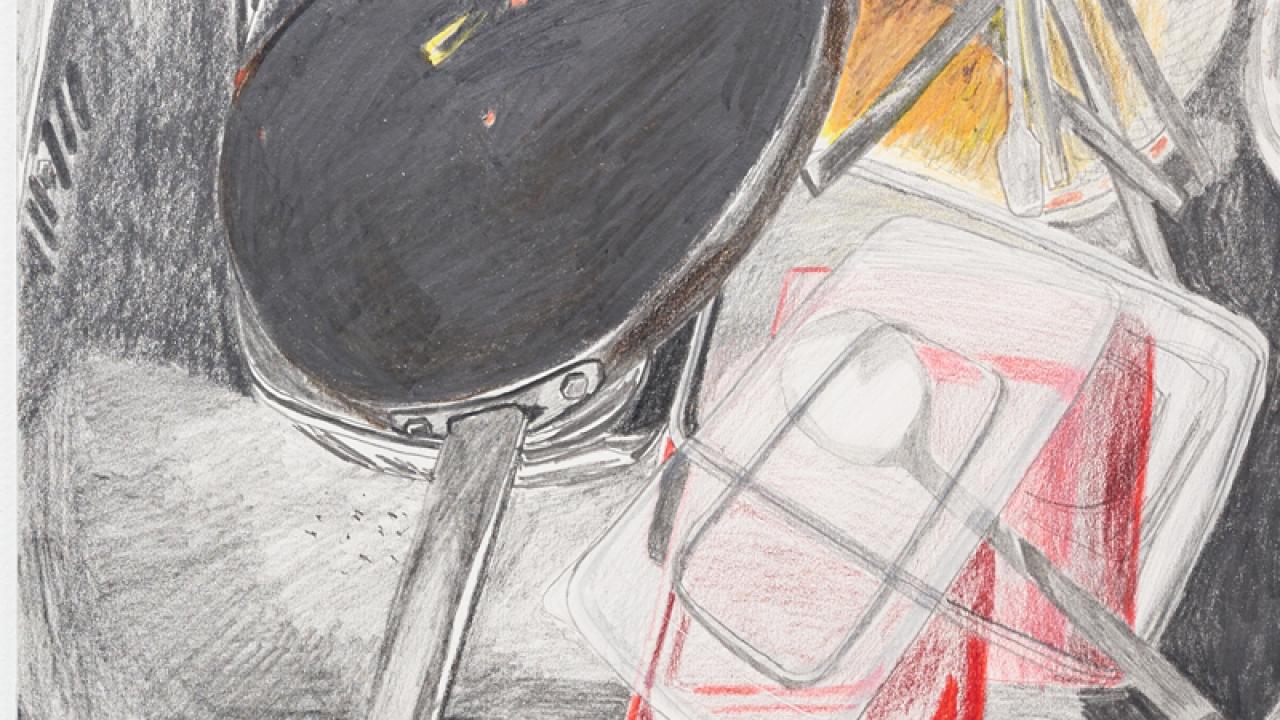 Reviews
Everything And The Kitchen Sink: A Show Of New Drawings By Manuela Gernedel 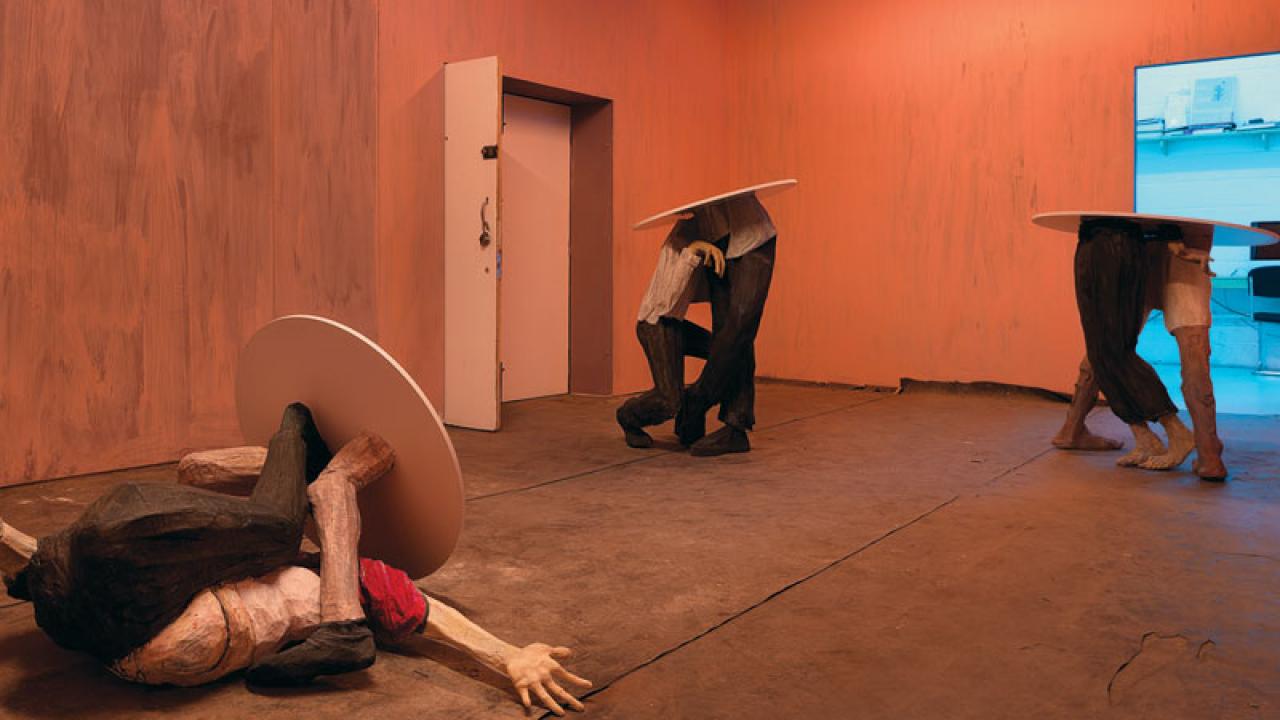