The Future Has a Silver Lining 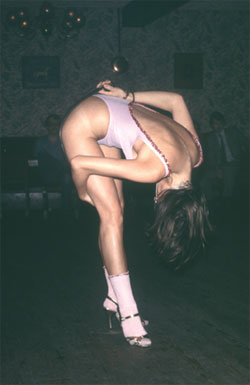 A few years ago I invited Kutlug Ataman to participate in a project; he declined, thoughtfully adding, ‘I wish you’d do this project when I’m dead’. Perhaps I should have archived the email and handed it over to Heike Munder and Tom Holert, who curated this exhibition, subtitled ‘Genealogies of Glamour’, an inquiry into the transformation of everyday gestures, objects and characters into spectacles of majesty and (self-)importance.
Ataman’s contribution to the show, Women Who Wear Wigs (1999), is actually ambiguous in terms of glamour: video narratives of four women (a political dissident, a transsexual, a practising Muslim and a cancer victim) stating their reasons for wearing wigs in Istanbul. Slick and persuasive in form, for sure, and entertaining with its geo-cultural tickle – but glamorous? With the popularization of faux aristocratic lifestyles among the postwar middle classes, the rise of H&M and fake chic, these days glamour can be pretty much anything and anywhere. (Camille Paglia recently called Hitchcock’s work an ‘ode to women’s sexual glamour’.) Even dictionary definitions daren’t offer more than vague, swishy metaphors of iridescence and light.
The show offers a number of useful historico-theoretical approaches. Glamour is staged as a ‘doing’, with several pieces analytically expounding glamour’s modes of dramaturgy and assemblage, such as Cosey Fanni Tutti’s Life Forms (1973–9), a piece that is enlightening, if somewhat lecture-ish, in the way pictures of Cosey herself as a performance artist, go-go dancer and nude model are accompanied by her critical commentaries on text panels. Another triptych, Francesco Vezzoli’s video piece Embroidered Trilogy (1997–9), is a fascinating and spectacular take on the glamour mode, with the artist demurely knitting in a corner in three different settings, as three grandes dames of Italian entertainment – Iva Zanicchi, Franca Valeri and Valentina Cortese – emphatically do their routine just next to him.
Seen alongside some slightly didactic feminist gestures and gay impersonations of coyness, Sylvie Fleury suddenly looks even more glamorous in her self-possessed, Genevan sort of way. Compared with the show’s general bias towards the burlesque and flamboyant, her Blue Notes and Incognito (2004) is almost understated. Fleury shatters a make-up case on a Carl Andre reconstruction, commenting not only on the performativity of glamour (the Chanel case was reportedly crushed by a designer stiletto borne by Fleury in person) but also on the antics of art history itself, her belligerent gesture disrupting a surprisingly seamless visual narrative that yokes together Minimalist art and luxury cosmetics. Other semi-auto-reflexive artworks tended to focus on celebrities themselves, for example the intriguing arrangement of film strips in Michel Auder’s Dead Souls (mostly) (2004), showing still images of Andy Warhol’s Factory entourage.
The show strikes a balance between the established, bourgeois side of things and the counter-glamour of drag and bohemia, and examines the very dispensation of the aesthetics of superiority – the privilege of privilege, so to speak, the issue of who has the cultural and financial capital to be glamorous in the first place. This exercise is as fascinating as it is important, but always runs a considerable risk of slipping into classroom deconstructivism, as in Jonathan Horowitz’ critique of Arnold Schwarzenegger (The Governator, 2003), its text captions and movie stills gravely warning us that Arnie is a total chauvinist – a conclusion so trite it actually makes him look witty and original by comparison. But the piece does offer an interesting, if unintended, glimpse into the way the growing complicity between contemporary art, fashion, cinema and advertising helps to turn everyday actions – shopping, dressing up or making sexist remarks – into phenomena laden with deep, murky meaning and glimmering relevance, the kind of upward revaluation that sexist remarks, at least, don’t warrant.
If glamour is about the mystique of exclusivity, the slippery economics of just the right dosage of glitz at just the right time, then what, you wonder, is an appropriate reaction to a museum full of glamour? It’s a bit like watching a peep-show on a nudist beach. One important part of the reaction is the very irritation one feels as a visitor, catching oneself hoping (against hope) to see something absolutely stunning, something overwhelming in its majestic, almost fascistic, attraction. It’s perfectly fine that the show consciously aims at an analytical overload that demystifies and, above all, historicizes. But to escape the dulling effect of the Cultural History seminar, more truly unexpected examples would have been needed, and fewer of the black-and-white Clark Gable lookalikes and Ziggy Stardust reproductions.
Ironically the show is at its most fascinating when it’s at its most historical, as in Christoph Schifferli’s compilation of early Hollywood glamour shots by anonymous studio photographers – examples of extraordinarily clunky, and yet undeniably appealing, stagings of the glamour repertoire. Schifferli happens to be a true collector, with that infatuated, feverish glint in his eye. ‘The real thing, with real pictures’, one is tempted to say, an irritating undertone of rearguard conservatism in one’s voice. Set alongside the post-ironic pastiches and docu-fictional détournements that make up the overwhelming majority of the work on show, this serious and sober collection of historical images suddenly stands out as remarkably different and seductive.