BY Anja Dorn, translated by Helen Slater in Reviews | 01 JAN 01

A
BY Anja Dorn, translated by Helen Slater in Reviews | 01 JAN 01 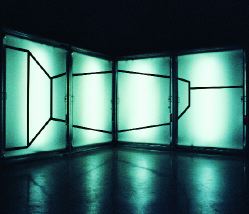 A Sellotape-covered figure of a black woman in a tight dress, Omni Potence (1999), greeted visitors to Gabriel Lester's show 'Choreography'. Reminiscent of an Oscar statuette, she was standing on a plinth inscribed with the words 'omnipotent, young, attractive, successful, happy, and healthy' - Lester's cynical comment about his first one man show at a commercial gallery. The paper doll contrasted with the elegant Sketches of Space (2000), which comprised four aluminium illuminated poster hoardings - familiar from pedestrian areas and bus stops - set at a slight angle to one another. A series of images of geometrical structures were rolled on cylinders in the light-boxes, creating an uneven rhythm of black lines, a never-ending interplay of possible combinations in which, at certain points, you could recognise perspectival constructions of squares, trapeziums and rhombi. Formally, the drawings allude to Mondrian, but negate the finished quality of his work. Here, the obviously quotidian stands against the exclusive quality of abstract museum works.

Behind the displays that divided the room was the main space of the gallery, where three videos, Choreography (2000), were projected. The work was slightly clumsily positioned: like a stalling car, one surface lurched to the next, an effect which linked the various components. Picture postcard scenes of mountain landscapes were filmed with a camera that constantly changed its perspective, while the horizon lines of the three images jostled against each other. The sensation of breadth and depth triggered by the landscapes was almost mocked by the remote control camera: the unedited footage was accompanied by the twittering of birds, and music by Gershwin and Ravel. As with Hip-Hop and Techno, pre-fabricated sound and picture sequences were sampled to create an original composition.

The cumulative effect of Lester's show was like looking at houses, advertisements, and people from the window of a moving bus. The work has a nightmarish familiarity that emerges from the repetition of banal situations without conclusion. In Choreography, for example, images of mountains are followed by images of the sea. Up to this point, Lester's intentions seemed undecided: partly tempting the viewer to be seduced while, at the same time, inviting them to maintain an ironic distance. The climax is a sequence shot in a forest, which is disrupted by accelerated camera work. The rhythm of the film becomes suddenly so brisk, even spectacular, that it threatens to dissolve the images of the landscape. The turbulent activity slows down to a final, calm sequence that disrupts the continuity between the three projections, by introducing three different scenes of nature. Through the isolation of cinematic means such as flamboyant, emotional music, and transforming great nature vistas into mechanical and disruptive loops, Lester's films appeared to be clichés from the cinema of great emotions.

A
ANJA DORN, TRANSLATED BY HELEN SLATER
SHARE THIS