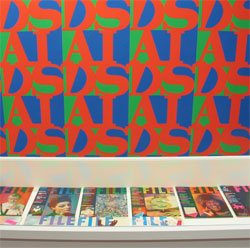 Billed as a ‘Selected Retrospective’, Project’s exhibition of works by the Canadian trio General Idea (AA Bronson, Felix Partz and Jorge Zontal) seemed concerned with looking not only back but also towards a future that never happened. Largely eschewing the pharmaceutical imagery with which the group famously responded to the emerging AIDS epidemic in the 1980s, the show focused instead on a selection of videos, texts, photos and documentary ephemera that pertained to the early project, The 1984 Miss General Idea Pavilion (1968–78), an imaginary building that Bronson has described as a ‘(semi-fictional) museum’, but which is perhaps best thought of as a phantom architectural skeleton on which the flesh of the artists’ practice grew.

Laid out in glass-topped cases whose forms recalled high-end Modernist coffins, the material relating to the Pavilion kicked off with the programme notes for General Idea’s (GI) 1970 ten-day event ‘What Happened’, a free-flowing (non-) interpretation of Gertrude Stein’s play of the same name that was composed of ‘hand-outs of the original text, popcorn, gravel, geodesic kite flying and demonstration trousers’, and concluded with the ‘1970 Miss General Idea Pageant’, a beauty contest in which the demure ‘Miss Honey’ narrowly beat three competitors in bear costumes to the winner’s sash. Scanning along the cases, past yellowing invitation cards and gummy-cornered photos, visitors to Project saw the yearly pageant evolve into something that – like all sentient entities – was aware of its own evolution and its own future end-of-days. The event’s last triumphant huzzah is pencilled in for 1984, and a purpose-built pavilion is put on the drawing-board, its design recalling both Partz’ pre-GI ‘Ziggurat Paintings’ (1968–9) and George Orwell’s pyramidal Ministry of Truth. The competitors’ costumes are sketched out, as is a seating plan for the event (a wonderfully campy touch), but this is all in vain. A series of images – achieved by setting off smoke bombs in a car park and photographing the resulting conflagration from a helicopter – purports to show The Ruins of the 1984 Miss General Idea Pavilion (1977) smouldering into nothingness. A nearby clipping from an issue of the group’s LIFE magazine-aping publication FILE (1972 –89) informs the viewer that this fabricated building has fallen prey to a ‘fire of unknown origin’, transforming GI from artists into ‘archaeologists’ of their own fiction.

If GI are ‘archaeologists’, however, they’re the kind with a TV deal and a coffee table book to promote, as their video Hot Property (1978–80) – shot a year after The Ruins of the 1984 Miss General Idea Pavilion – reveals. Set in 1984, on the night of the pavilion’s ‘destruction’, the piece shows the group inaugurating the final pageant in front of a live studio audience in the manner of a cheesy talk or variety show. Following a parade of contestants dressed up as various pieces of geometrical and mark-making equipment (during which a giggling Zontal asks ‘can we leave the pen’s lines on the cutting room floor?’), the ‘fire’ takes hold, and we cut to footage of guests fleeing from the smoke, for all the world like extras in a 1970s’ disaster movie. As the video comes to its conclusion, a stentorian voice-over informs us that, despite this (apocryphal) apocalypse, ‘mystery will make the pavilion rise again’.

The 1984 Miss General Idea Pavilion is a project that’s about the uneasy relationship art has to time and to (art) history, about what form an artistic practice’s spine might take and in which direction it might grow. Shown now, 12 years after the AIDS-related deaths of Partz and Zontal (Bronson continues to work as a solo artist), its savvy Conceptualism and playful humour have become flecked with heartbreak – the resurrecting ‘mystery’ promised by the voice-over will never now take place. This was underlined by two other works shown at Project: GI’s celebrated, Robert Indiana-referencing AIDS Wallpaper (1989–2006), which covers the main gallery walls, and a billboard-sized print of AA Bronson’s death-bed portrait of Partz, Felix, June 5, 1994 (1994), pasted to the building’s façade, where it gazed out at the good-time boys and girls thronging Dublin’s party street Temple Bar. These curatorial selections could be interpreted as a full stop, but the exhibition, like the fictitious venue for the pageant, preferred to conclude on a note of suspense. In Project’s window hung Luxon VB (1973–2006), a Bronson-supervised remake of a Venetian blind originally designed for the pavilion whose mirrored slats worked like a periscope, drawing a reflected image of the outside world into the gallery’s foyer. If this was a retrospective, it was one that was inflected – as perhaps all retrospectives should be – by fragments of present-day life.

Exhibition Reviews , Reviews Across The World
The Irreverent Advocacy of General Idea