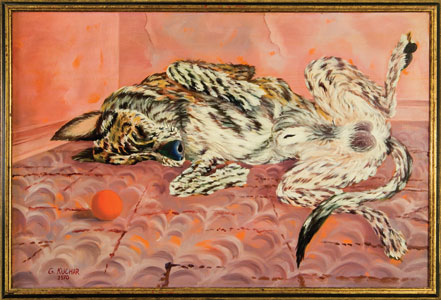 For ‘Good Morning, Midnight’ Los Angeles-based critic Bruce Hainley united a group of mostly West Coast artists, many of whom have rarely shown in New York. His title comes from Jean Rhys’ eponymous novel, written in 1939, which she herself had appropriated from a line in an Emily Dickinson poem, and the works Hainley chose have similarly associative relationships. The show, however, was no illustration of Rhys’ chronicles of her alcohol-infused life in and around Paris in the years before World War II. Rather, Hainley attempted to capture the multifaceted complexity of the novel, a story painting a dark and witty picture of that uncertain era in restrained and limpid prose. He also created a visual articulation of the smart, effervescent and unorthodox writing style for which he himself is known.

In the next gallery a fifth theme, religion, was introduced, and one began to sense the political subtext lying beneath the surface of summer fun. Reflecting Rhys’ oblique treatment of fascism and xenophobia, Hainley chose artists who address sober issues without belabouring the darkness or over-determining answers. Jasper Johns is one of the show’s elder statesmen, an artist whose radical approaches in the 1950s continue to play out with relevance and tact, and elegantly engage issues of homosexuality played out elsewhere, including William E. Jones’ Film Montages (for Peter Roehr) (2006). In his monochrome charcoal print Tantric Detail (1980) a skull, a scrotum and a chain evoking both semen and rosary beads, among other things, co-exist within his elegiac chevron pattern and manage to be both elegant and crude. Lisa Lapinski echoed the complexity of family values and religion in Christmas Tea = Meeting, Presented by Dialogue and Humanism, formerly Dialectics and Humanism (2007), a bleakly humorous sculptural assemblage where swastikas, crosses and Stars of David intermingle with less loaded patterns in a lattice fence.

Hiorns’ work was a high point of the show, and the four distinct sculptures provided a mini-exhibition for the British artist’s New York début. In Before the Rain (2003) models of Notre-Dame and Ulm cathedrals were dipped in copper sulphate to create a crystalline blue surface. The replicas were then shelved in a cabinet of red glass, Perspex, wood, paper and tape, materials that recall Donald Judd and reflect Hiorns’ reconsideration of the principles of Minimalism. In turn, Joy (2003) came from a series of steel sculptures sprayed with perfume, the stained metal plank leaning insouciantly in the corner opposite an unlikely scatter piece made of contact lenses – two silly situations that unfold into seductive alchemical shifts. Hiorns’ unlikely material treatment also unveils unexpected characteristics such as beauty, fragility and a deep sense of melancholy.

Lecia Dole-Recio’s elegant abstract collages share these concerns by exploring the metes and bounds of a restrained palette and a limited vocabulary of arcs, ellipses, slices and slivers. Her gestural geometries are echoed and articulated by Vincent Fecteau’s strange and unusual papier-mâché maquette. Curiously, much of his object’s presence is achieved through Fecteau’s surface treatment of the bulbous forms and the mottled pattern of pinky-orange and black paint that he applies by hand. These literal fingerprints resonated in Larry Johnson’s Untitled (Land without Bread) (1999–2000), where the artist’s imprint is used to obscure portions of the frame. In these instances one picks up on Hainley’s tenet that material is not the measure, as well as his admiration for artists who use a medium against itself. Richard Hawkins’ Polaroids in Study for Sculpture (1997) presented another example: table-top towers of household junk that function as sketches for sculptures.

The show came together in the work of the maverick artist and filmmaker George Kuchar. Watercolour portraits of the cult sci-fi and horror novelist H.P. Lovecraft (1977) and the apocryphal (but sometimes glimpsed) Mothman (1982) injected a peculiar, alien spirit into the exhibition. They also demonstrated Kuchar’s brilliant use of colour and shed light on the way he manipulates his palette to articulate scenes in his films. But the stylistic similarities with strains of American Realism, particularly the over-the-top colours and distorted perspectives of artists such as the folksy Thomas Hart Benton, underscore the abstraction encoded within representation. Mostly, it is Kuchar’s eccentricity, his passion and belief that strange encounters make us more human, that illuminates the self-confident curiosity among the works here. Inspired by Rhys’ bold and uncompromising voice, Hainley presented a group of artists who powerfully challenge our expectations of material, form and subject.