The ‘last judgment’ – the day on which we stand before God and get sent to heaven or hell – has inspired artists from Michelangelo to Wassily Kandinsky. The possibility of an ultimate reckoning looms large in Greg Parma Smith’s magisterial six-panel painting, Last Judgment: Selfless, Deathless, No World (2015–16), which forms the core of his second solo exhibition at David Lewis and provides its title. Rather than simply refer to religious allegories, though, Parma Smith’s painting meditates on the ambiguities of contemporary life.

The exhibition begins with a wall text from Yukio Mishima’s novel about reincarnation, The Temple of Dawn (1970), whose subject is subtly reprised in several works on view. Marker drawings of butterflies, a recurring motif in Parma Smith’s work, could refer to a kind of rebirth, as if the bugs have freshly emerged from cocoons. In the following gallery, Last Judgment also seems to be shedding a layer: on each of the painting’s six panels, canvas affixed to the surface scrolls up neatly to reveal – or perhaps conceal – another painting underneath. Some panels bear as many as three rolled sections. At a panoramic glance, the work depicts a sun that rises (or sets) over a vast sea, its muted hues of grey and ochre reminiscent of a hazy Southern California sunset. Against this serene backdrop stands a nude woman, while three pelicans – each painted white, grey, black or red – take flight. Their colours correspond to the four horsemen of the apocalypse, as prophesied in the Book of Revelations: red for division, black for oppression, grey for destruction and white for conquest. Despite this foreboding allusion, the pelicans are also an archaic symbol of love and self-sacrifice, fabled to feed their young with their own blood when nothing else is available. In two upper-panel corners, rolled canvas reveals blue butterflies fluttering through thickly painted golden rays. The radiating sunbeams could personify Aruna, the Hindu god who lends his name to Wat Arun, the Bangkok temple that inspired Mishima. 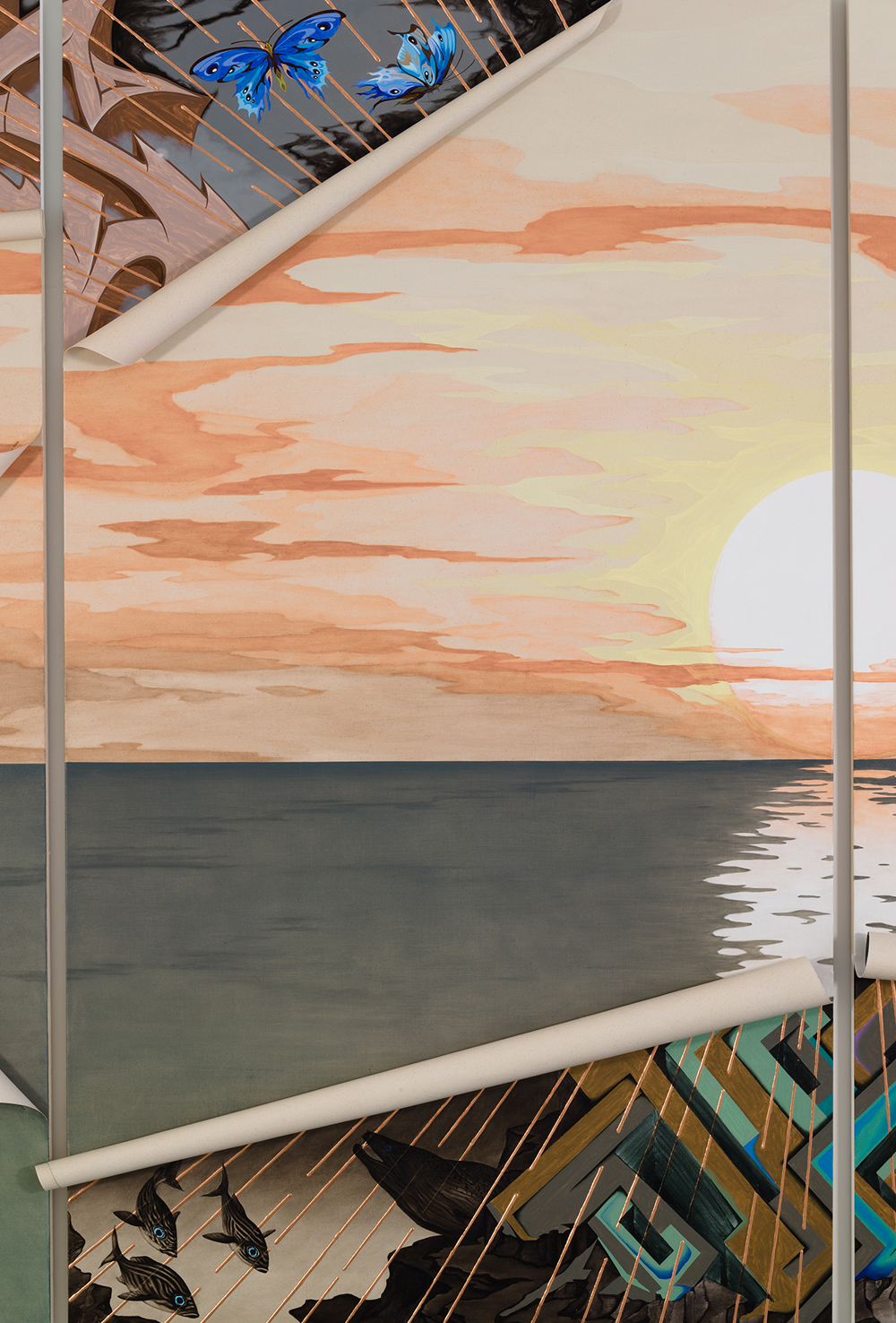 The painting’s most striking element is the nude woman, whose angelic presence portends either damnation or salvation – although which we cannot tell for sure. She hesitates mid-stride, as she seems to walk Christ-like on the surface of the sea. Her figure is a composite of different life-drawing models, fragments of other people bound tenuously together by a tangle of golden lines, as if viewed through cracked glass. The sky darkens behind her, creating a contemplative silhouette against a wide ocean that mirrors the brooding clouds, reminiscent of Caspar David Friedrich’s Wanderer Above the Sea of Fog (1818). The woman appears less introspective than Friedrich’s hiker, however, her eyes narrowing with concern as she looks off towards the horizon. The entire composition is disrupted by additional elements such as three nearly indiscernible words – ‘Deathless,’ ‘Selfless’ and ‘No World’– painted in graffiti script, their conflicting connotations further obscuring what type of future the work foretells.

The painting’s ambiguity – poised between sunrise and sunset, revelation and concealment, damnation and salvation – is a critical riff on past and present apocalyptic films, novels and artworks that warn us about the consequences of uncertain judgment. Unlike his fellow doomsayers, Parma Smith suggests that, with our increasing agnosticism, the future has grown more open to possibility. His painting challenges us to face a future filled with contradiction and to find hope there, unburdened by the prejudices of myth and religious dogma.