As a new book on Public Image Ltd shows, the influence of their 1979 album Metal Box stretches far and wide 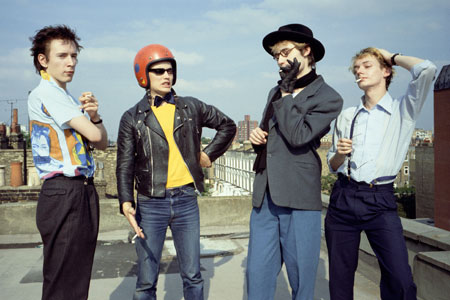 My most vivid memory of Metal Box dates to a week before Christmas Day 1979. My parents were out, so I sneaked Public Image Ltd’s (PiL) album out of the airing cupboard, where they stashed the presents, and for the first time prised off the tin’s lid, then gingerly extracted the three discs tightly crammed inside. Aged 16, I just couldn’t wait to play the record that was being universally acclaimed as a giant step into a brave new world beyond rock’s confines. As a result I crossed a line myself, between innocence and adulthood.

Demystification was the whole point of Metal Box’s packaging, a metallic canister of the type that ordinarily contains movie reels. Like the band-as-corporation name Public Image Ltd, the matt-grey tin was an attempt to strip away mystique, all the ‘bollocks’ of rock romanticism. But Metal Box, of course, just added to the mystique around PiL, the group John Lydon formed after splitting with the Sex Pistols. Drab yet imposing, standing out in record shop racks or on the shelves of a collection, the can instantly became a fetish object. And although its aura was utilitarian, the packaging was actually less functional than a normal album jacket. Instead of slipping the disc out of its sleeve, you had carefully to ease out the three 45 rpm 12-inches, which were separated only by paper circles of the same size as the platters. Removing the vinyl without scratching it was a challenge. Almost 30 years later my three discs look in remarkably good nick, considering I must have played them hundreds of times. But then I was precious about my possessions: an avid post-Punk fan hamstrung by weak finances, I owned about six albums in toto, and Metal Box’s hefty £7.45 price tag was the reason I’d requested it for Christmas, despite the delay this would mean in hearing it.

All this heightened the experience of playing Metal Box, giving it an almost ritualistic quality. PiL’s own motivations were partly malicious pranksterism and partly a serious attempt to deconstruct ‘the album’. In interviews bassist Jah Wobble was adamant that you should definitely not play Metal Box in sequence but listen to one side of a disc (two or three tracks at most) at a time. Spreading over an hour’s worth of music across three records encouraged listeners to reshuffle the running order as they saw fit; as a result the record became a set of resources rather than a unitary art work. ‘Useful’ was a big PiL buzzword (that’s what they liked about disco – it was danceable). It was a term that allowed Lydon to carry on opposing himself to all things arty and pretentious, even as he perpetrated a supreme feat of artiness with Metal Box.

Like Peter Saville’s exquisitely designed releases for Factory Records, Metal Box simultaneously extended the art rock tradition of extravagant packaging (Led Zeppelin’s Physical Graffiti, from 1975, for instance) while subverting it through its stark plainness (which ironically, cost a bleedin’ fortune). The only precedent I can think of is Alice Cooper’s 1973 album Muscle of Love, which came in a brown cardboard carton (Lydon, as it happens, was a huge Alice fan). The concept for Metal Box originated with PiL’s design-conscious friend Dennis Morris, the court photographer at Lydon’s house in Gunter Grove, Chelsea, and also a member of the all-black, PiL-esque band Basement 5. Where the sleeve of the début album Public Image (1978) lampooned rock’s cult of personality (Morris photographed the band in Vogue-style make-up and suits), Metal Box went one step further to a blank impersonality, the absence of any kind of image at all. Flowers of Romance (1981), the third album, took a step too far with its desultory Polaroid of band associate Jeanette Lee, but that was long after Morris had been ousted from the PiL milieu.

Morris’ crucial contribution to PiL is something that comes through loud and clear in the new book Metal Box: Stories from John Lydon’s Public Image Limited (2007). If author Phil Strongman is savvy enough to name his book after PiL’s totemic masterpiece, he’s less shrewd in doggedly pursuing the story long after the band ceased to be a creative force. As Mark Fisher has noted, every pop story, followed through to its narrative (in)conclusion, ends in ignominy or disappointment. So it is with the brand-disgracing travesties Lydon released immediately after Wobble (the group’s heart and soul) and then guitarist Keith Levene (its musical brains) were ejected. More disheartening still, in a way, was the mediocre competence of the PiL albums of the late 1980s and early ’90s. Still, Strongman’s account of the ‘good years’ is rich in new data, from deliciously incongruous trivia (Ted Nugent was Levene’s choice to produce the first album! Led Zeppelin manager Peter Grant was mad keen to take on PiL as clients!) to more compelling revelations (the book settles the mystery of whether ‘Poptones’, Metal Box’s stand-out track, is sung by a murdered corpse or an abduction survivor abandoned and shivering in the woods).

As so often with rock biographies, though, much of the information tends to tarnish the reputations of the protagonists. Ironically, given their fervent anti-rock stance (Lydon derided rock as a ‘disease’, something to be ‘cancelled’), PiL’s productivity was disabled by a thoroughly rock’n’roll set of failings: paranoia, egomania, money disputes, mismanagement (PiL actually had no manager, on account of Lydon’s bad experiences with Malcolm McLaren; the role was portioned between Jeanette Lee and another Lydon crony, and the band’s finances were kept in a box – cardboard, this time – under a bed). Equally lamentably rock’n’roll is the Spinal Tap-like procession of drummers: five in the first two years (one of whom, ex-drummer for The Fall, Karl Burns, stayed in the band for just a few days, quitting after being the victim of a dangerous prank involving fire).

All the main players (and numerous extremely minor ones) are interviewed, with the glaring exception of Lydon himself. But that’s no surprise, because he’s consciously distanced himself from PiL over the years. At some point he clearly grasped that his place in rock history (and future income) depended on the Sex Pistols adventure and subsequently threw all his energies into burnishing the Johnny Rotten legend. But I wonder whether another factor behind Lydon’s silence is that the PiL years are painful to contemplate – not just because of bad blood (Wobble was one of his best friends) but because the music of Metal Box, rooted in his true loves (Can, Captain Beefheart, Peter Hammill, dub), meant so much to him. He really believed all that ‘rock is dead’ rhetoric, and was sincere when he dismissed the Sex Pistols as way too traditional. And for a moment rock’s intelligentsia concurred. Metal Box’s stature in 1979–80 was so immense that many commentators invoked Miles Davis’ early-1970s’ music as a reference point. Lester Bangs declared that he’d stake a lifetime’s writing on Metal Box and Miles’ Get Up With It (1974). When his apartment caught fire, the first and only thing Bangs grabbed as he fled to the street below in his pyjamas was that grey tin can.

It’s the music inside that counts, though, isn’t it? My other vivid memory of Metal Box is bringing it to school after our music teacher asked each member of the class to bring in a favourite record and talk about it. I played ‘Death Disco’ and ‘Poptones’, then regurgitated stuff I’d read in NME about how PiL were radical for absorbing the influence of funk and reggae. I wasn’t able to articulate what made their mutational approach different from and superior to contemporaries such as The Police or indeed Old Wave rock gods such as The Stones when they disco-rocked it in 1978 with ‘Miss You’. But the lasting proof of PiL’s innovatory power is their music’s ever-widening ripples of influence, which encompass Massive Attack, Primal Scream (they hired Wobble for 1991’s ‘Higher than the Sun’), Tortoise, Radiohead and many more. You can trace a line from PiL via On U Sound (whose Adrian Sherwood had dealings – musical and, it’s rumoured, otherwise – with Lydon, Levene and Wobble back then) to today’s dubstep, which, like Metal Box, is Jamaican music with the sunshine extracted – roots reggae without Rasta’s consoling dream of Zion.

PiL’s biggest influence though, may be their rhetoric. The idea that ‘rock is obsolete’ (as Wobble put it in 1978) became a self-replicating meme that inoculated an entire generation against the retro-virus by directing them away from rock’s back pages and towards the cutting-edges of contemporary black music. In the age of downloading and dematerialized sound-data Metal Box has a fresh resonance for me as a powerful argument in favour of the necessity for music to be physically embodied. The record was significantly diminished in its subsequent incarnation as Second Edition (the gatefold-sleeved double album it became when the 50,000 limited edition Metal Box sold out). The CD reissue, housed in a miniature metal canister, is almost risible to behold, while its digitized sound lacks the warmth and weight of the original deep-grooved 45 rpm 12 inches. Most crucially, you simply weren’t meant to listen to Metal Box as one long, uninterrupted 70-minute sequence. A 1979 pressing fetches $200 through Internet sites such as Gemm; the reproduction antique vinyl reissue of Metal Box from a few years back isn’t cheap either. But this is one record you simply must have, hold and hear in its original format.