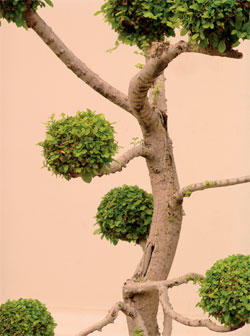 The 19th-century German landscape gardener Hermann Ludwig Heinrich von Pückler-Muskau introduced the concept of the English park to Germany. His gardens didn’t attempt to imitate or harness the wilderness; rather, they were deliberately cultivated and arranged, intermittently bringing nature into view against buildings and pavilions as the visitor strolled through the landscape. In her photographs, Heidi Specker also isolates those views of alignment between nature and the built environment. Yet she is not a romantic landscape photographer, or even a modern flâneur. In series such as ‘Im Garten’ (In the Garden, 2003–4) she adopts the perspective of an architectural restorer or a insurance adjuster as an antidote to mere melancholy, recording architectural and natural decay in parallel – equivocally posing trees with their peeling bark and stunted limbs, tumescent eyes and snapped branches, against crumbling concrete reliefs.

In Specker’s work, sprouting leaves are not pictured for their conventional beauty, and Modernist architectural façades are not portrayed in the service of ornament or nostalgia; rather, both become structural elements of an abstract visual language. Buildings are no longer seen as architecture, but as surfaces or patterns. Tiles or bricks become flat grids, and branches of trees spread like brushstrokes across the sky, as if both were part of the same flat surface before they were part of the photograph. Most pointedly, in Punkte (Dots, 2003–4), an architectural pattern of round dots is both the backdrop and the subject of the image. However, Specker’s abstraction is not pure form, but one possible way to organize a view of an urban landscape.

Specker uses Photoshop like a darkroom practice – to eliminate contrast and illuminate details that would normally be too dark to make out. Although there is clearly something not entirely realistic about her photographs, they nevertheless seem organically made, like paintings or collages, rather than artificially manipulated. By artificially reducing the pictures’ depth of field, she turns some images into optical illusions, but more like conventional eye tests than harsh digital manipulations. In Schulhof (Schoolyard, 2003–4) two tree trunks appear collaged on a pink wall, figure and ground are unnaturally compressed. By refusing photography’s inherent ability to imitate perspective, Specker also resists giving us panoramic views or precious still life compositions – not unlike Pückler’s preference for isolated ‘prospects’ rather than sweeping vistas.

These photographs are searching images; they are more investigative than intrusive, like a nurse gently inspecting a wound or bending a hurt knee to assess an injury. ‘Concrete’ (2003–4) – a series of observations of Brutalist architecture – carefully, almost sympathetically, traces the stages of the life of one material: from the mixture poured into the wooden mould, hardening to leave the texture of the grain visibly imprinted in the rough grey surfaces, to grout eating away at the surfaces and damp spreading like fungi or veins. Specker reveals concrete’s raw materiality – like a tooth in which we can see the abscess, or a china cup with a chip in it.

In her most recent exhibition Specker exported her visual language to views of Bangkok’s cluttered environment, pairing her own photographs with classic images of sculpted Buddhas taken by Germaine Krull, a German war correspondent, photographer and manager of the Oriental Hotel, who lived in Thailand from 1947 to 1966. Specker paired her studies of oriental mouldings covered by metal gates, smog-filtered concrete motorway flyovers or layers of cables criss-crossing concrete façades with Krull’s images of Buddhas, bringing us closer to resurrecting the displaced Westerner in the Far East who seeks order in the rigid, anthropological archiving of the often damaged or crumbling statuettes. In one group, a photograph of a slender Buddha in the lotus position sits beside Specker’s view of a rooftop swimming pool. The image is less a panorama of the city than a palimpsest of abstract patterns: the ripples in the pool, its square ceramic tiles and the opaque green windows of the building behind it. Next to these cityscapes Krull’s Buddhas transcend serial documents of conventional ‘exotic’ beauty; they endow Specker’s images with an element of portraiture, providing faces where façades have none.

Although some attribute Specker’s eye for cityscapes to her living in Berlin, she was in fact raised in rural Germany. As she points out, while she grew up in the countryside, the surrounding land was never a wilderness so much as a livelihood. Perhaps that’s why her trees seem extracted primarily to distinguish the architecture behind them as discrete surfaces. Like Pückler’s cultivated gardens, Specker’s compositions are not pre-ordained but carefully groomed and tended.