Jason Farago is a columnist and critic based in New York. He is a regular contributor to The Guardian. 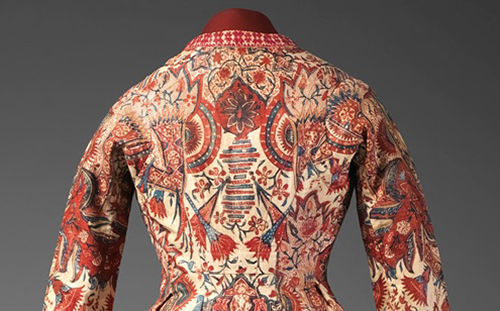 The most contemporary exhibition I saw this year was of art three or four centuries old. ‘Interwoven Globe’, the Met’s current show of trade textiles of the 17th and 18th centuries, is an Internet-age triumph without any screens, a landmark in the history of exhibitions that puts almost all other putatively ‘global’ enterprises to shame – and an unparalleled deployment of art to map a world in motion that every historian, critic, or curator of contemporary art should take as a model for practice. Sounds like hyperbole? That means you haven’t been yet, so call me! You have until 5 January, and lately I’ve taken to dragging my friends along on repeat viewings. On visit four or five I went with the initially skeptical director of a certain big Chelsea gallery, who broke down in tears.

Thinking about art in global terms is very hard, and not cheap either. But Amelia Peck, the curator who led a team drawn from nine (seriously, nine) of the Met’s departments, is far too serious to dress up a principally Western show with a few ‘exotic’ outliers or, worse, to dabble in the Google-and-FedEx dilettantism we see at too many supposedly global biennials and fairs. Instead, she insists that forms gain power not from what they look like or where they come from but from how they move. So a painted soldier’s jacket, with a Chinese collar but made in India for the Thai market, features on its back a fearsome goblin that fuses religious figures from across Asia. Or a furiously messy tapestry from the early 17th century, made in China to be sold in Portugal, depicts the abduction of Helen of Troy with lions and dragons and Manchurian waves. (Like much of the show, that tapestry is in the Met’s own collection, though its hybrid character means it usually sits in storage since neither the Asian nor European galleries will hang it. That’s the other virtue of ‘Interwoven Globe’: it’s a quiet attack on obsolete museum structures.) Most impressively, Peck never allows us to forget that art occupies aesthetic and economic planes at once. That’s especially clear in the brutal gallery devoted to the slave trade, in which textiles functioned both as an index of cruelty and a currency to barter for human beings. Admittedly easier to see with decorative arts, this double valence inheres in fine arts too: a number of paintings, not just by major artists such as Joshua Reynolds but by obscurer figures from Jamaica to Iran, testified to the workings of globalization centuries before the word was coined. 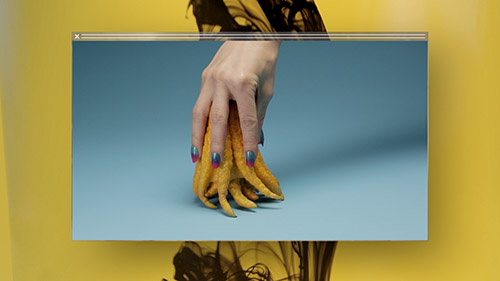 What would an exhibition of contemporary art look like if curators tried, with the sophistication and the ambition of ‘Interwoven Globe’, to think about how forms migrate, how they mutate while migrating, and how those mutated, migrated forms then inform new circumstances before migrating again? One rare attempt was Roger Buergel and Ruth Noack’s Documenta of 2007, though even that show shied away from anything as systematized as Peck’s network of forms in motion. What it would not look like, I can say, is this year’s* Venice Biennale*. I’m in the minority here, I realize, but I had big problems with Massimiliano Gioni’s exhibition, which I took to calling ‘the New Age biennale’ for its uncritical, ahistorical celebration – at a moment of genuine political and economic crisis in Italy and elsewhere – of mysticism, ritual, the occult, art brut, and straight-up kitsch. But in Camille Henrot’s Grosse Fatigue, shown in the Arsenale, the difficult global questions that Gioni’s biennale blocked out rushed at you, piling one on top of the next in an encyclopedic torrent of desktop videos. One of the things I like most about Henrot is her confident use of anthropology, with all its compromises and complicity, as a frame for understanding the present. In her art, unlike in the rest of Gioni’s show, there’s no getting away from war or violence or nastiness if you want to make sense of things. Elsewhere in Venice I appreciated Sharon Hayes’ recreation of Pasolini’s Comizi d’amore at a women’s college; the underrated and very ambitious South African Pavilion, curated by Brenton Maart and featuring the photographs of Zanele Muholi and a truth-and-reconciliation cantata from Philip Miller; and then of course there was Manet in the Palazzo Ducale, whose cancel-the-biennale pairing of Olympia and Titian’s Venus of Urbino was actually less exciting than his later seascapes, so modern as to be embarrassing. 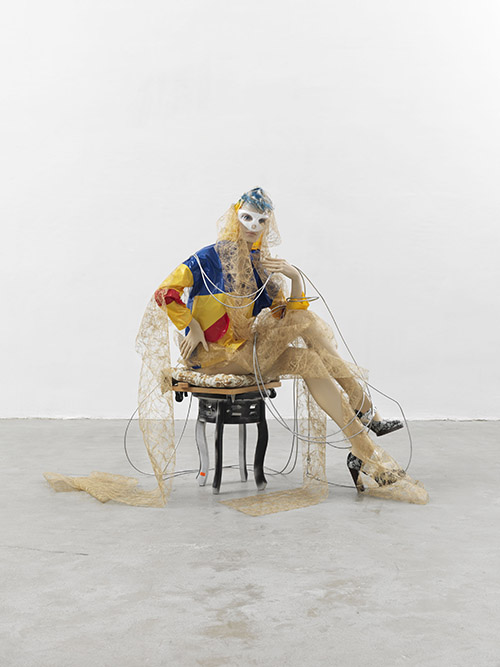 Back in New York, the best gallery show I saw in 2013 was from the go-for-broke painter Catherine Murphy, who had her first New York exhibition in five years at Peter Freeman’s new space in SoHo. Her wonkily scaled, camera-indifferent scenes of a curling garden hose or a paper snowflake taped to a window were not an apology for painting but a painting beyond apology. Some other highlights of the gallery season were Anne Truitt at Matthew Marks and Stephen Westfall at Lennon Weinberg, both of them rare figures whose abstraction still feels optimistic rather than market-devoured; ‘…but the clouds…’, a smart and melancholy Beckett-themed group show at Room East; and Sverre Bjertnes at James Fuentes, which featured an out-of-the-park film starring the artist’s girlfriend Hanna Maria Grønneberg that was at once music video and relationship counselling. MoMA had a very, very bad run (a weak exhibition of Japanese art, a willfully perverse Le Corbusier retrospective, a lazy sound art show, the Instagrammer’s fun house known as the ‘Rain Room,’ and a disgraceful pseudo-avant-garde swindle by none other than Tilda Swinton), but the museum finally got back on track this November with its retrospective of Isa Genzken – a victory lap for an artist whose influence goes deeper than any of us yet realize.

On the road: at the Royal Ontario Museum in Toronto, the exhibition ‘Carbon 14: Climate Is Culture’ took on the most important and least hopeful issue of our time through the art of Myfanwy MacLeod, Zacharias Kunuk, and others.* ‘Losing the Human Form’, at the Reina Sofia*, was a fantastic introduction to Latin American art and activism of the 1980s: under multiple dictatorships, the show argued, the difference between the two was negligible. Ida Ekblad, subject of an early retrospective at Oslo’s national gallery, is fearless. Also, I am not ashamed to say that I liked Andreas Mühe’s ‘A.M. – eine Deutschlandreise’, a Berlin exhibition of photographs of (ostensibly) Angela Merkel staring out of her government Audi at Friedrich-style landscapes of mountains and sea. The artist convinced several newspapers that he’d collaborated with the woman who shares his initials; the chancellery denies it. 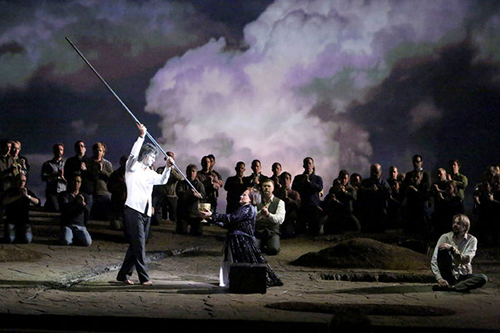 Speaking of the chancellor, 2013 was Wagnerjahr, the 200th birthday of the megalomaniac who, as architectural historian Juliet Koss has argued, skulks around modernism like a repressed nightmare. (In Venice, the city where he died, the Palazzo Fortuny held a substantial exhibition on Wagnerism in visual arts that stretched as far as Kiefer and Viola.) I didn’t make it to Bayreuth this summer and so had to rely on bootlegged footage of Frank Castorf’s gloriously incoherent bicentenary Ring, wherein Brünnhilde and Siegfried’s love duet was interrupted by rutting crocodiles. But I did see two different productions of Parsifal, Wagner’s inscrutable testament, that were each in their way transformative. In January, at the Teatro Real in Madrid, a fleet, almost Italian Parsifal, starring the elegant Korean bass Kwangchul Youn, stripped away the opera’s mythological bulk and found in Wagner’s last work something at once historical and present-tense. And in February the Metropolitan Opera junked its dull old horns-and-breastplates production and mounted a blood-soaked, eco-feminist Parsifal, directed by François Girard, that made you feel as if New York’s notoriously conservative performing arts scene was not all hopeless. ‘PARSIFAL ENTPOLITISIERT ALLES,’ Jonathan Meese once wrote (Parsifal depoliticizes everything) but in Girard’s hands, and with the help of video artist Peter Flaherty, Parsifal became a necessarily dour parable of climate change and the necessity of political and social redemption before any ecological salvation can take place. (A planned revival in 2014 has been cancelled; the Met, the largest performing arts organization in the United States, can’t afford it.)

The most important book I read in 2013 was Austerity: The History of a Dangerous Idea, by the Scottish political economist Mark Blyth – an indictment of our age’s fiscal insanity that laid out how austerity does not just fail on its own longue-durée terms but doesn’t even work in the short run, except as a means to enrich those in power at everyone else’s expense. It’s essential art world reading, for as multiple economists have shown (and as Andrea Fraser has loudly reiterated) art is one of the few sectors to thrive in these sickening conditions, and there’s no divorcing the art world boom from a larger economic disaster that, more than five years after Lehman’s collapse, shows no signs of reversal. There was more hope, at least, to be gleaned from László Krasznahorkai’s novel Seiobo There Below, released in English this year, that is one of the most beguiling books on art I’ve ever read. The Hungarian author, in sentences that spiral for 20 pages or more, looks at both real and fictional artists wrestling with creation in their studios, as well as gallery-goers struggling to experience art while the world outside roars with such ferocity they can hardly concentrate. (I sympathize. One chapter takes place at Venice’s Scuola Grande di San Rocco, to which I escaped in May when the biennale got to be too much and where people kept texting me regardless.) I also dug deep into JM Coetzee’s The Childhood of Jesus, a head-scratching non-allegory of socialism and the afterlife, and his best book since Disgrace; as well as *Albert Camus’s newly translated Algerian Chronicles, which Claire Messud, herself the daughter of a pied-noir, beautifully dissected a few weeks ago in the 50th anniversary issue of the New York Review of Books. That publication’s birthday celebrations were a necessary reminder that for all my hometown’s Singapore-on-Hudson gilded lifelessness, sometimes New York still gets it right.

Things to look forward to in 2014? I am limbering up for* ‘Marcel Duchamp: la peinture, même’ at the Pompidou* – a deliberately paradoxical attempt to look at Marcel as a one-medium artist. Beyond that there’s Lygia Clark at MoMA, Camille Henrot at Chisenhale and the New Museum, Michael Snow at the Philadelphia Museum, the good folks of Triple Canopy in the Whitney Biennial, Stéphanie Moisdon’s exhibition ‘1984–1999’ at the Pompidou Metz (with scenography by Dominique Gonzalez-Foerster), Sasha Waltz’s Tannhäuser at the Staatsoper, Olivier Py’s first season as head of the Festival d’Avignon, the promising Sydney Biennale under the direction of Juliana Engberg … and the inauguration of Bill de Blasio as mayor of New York, whose only drawback is that my London friends will now be subjected to Michael Bloomberg at the Serpentine.

Jason Farago is an art critic for The New York Times and the co-founder of Even. He lives in New York, USA.