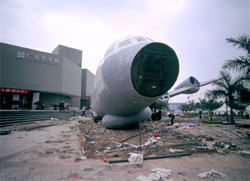 Huang Yong Ping is arguably one of China’s pre-eminent contemporary artists, and this first retrospective dedicated to his career from 1985 to the present combines irony with humour, politics with spirit-uality, Yin with Yang. Although Huang permanently left his home (where he was the established leader of a small avant-garde group known as Xiamen Dada) for Paris in 1989, his creative methodology remains firmly rooted in his Chinese identity. ‘House of Oracles: A Huang Yong Ping Retrospective’, organized by Walker Art Center curators Philippe Verne and Doyen Chon and currently at Mass MoCA, is grounded in Tao, Chan (Zen), Chinese medicine and legend, and belief in the ancient prognosticative I Ching, the Book of Changes. Huang’s consistent questioning of the hierarchies of language, art, history and politics is equally mediated, however, by Western influences including Ludwig Wittgenstein, Michel Foucault, Joseph Beuys, John Cage and Marcel Duchamp. In fact it is the collision between ancient beliefs (China) and new knowledge (the West) that drives Huang’s art.

Visitors passed into the Huang retrospective via one of two intersecting passageways, each partially blocked by a cage containing pungent lion dung and lion food. Above each entry were signs reminiscent of a passport control point, reading ‘Nationals’ and ‘Others’. No matter where they entered, viewers were subjected first to the overwhelming stench and then to over 45 marvellous works, including early paintings created by chance operations, documents of radical Dada performances, diagrams, sculptural objects and site-specific installations designed to provoke, critique and confound. A fold-out ‘Travel Guide to Huang Yong Ping’ included in the beautiful and informative exhibition catalogue shows the works in relationship to four major themes: chance, clash, colonialism/imperialism and Taoism.

Kitchen (1987) stood out among other early works based on chance and process. A raw canvas left on a kitchen wall for over six months became gradually overlaid with rich patterns of dust and traces of greasy sm oke. This was shown together with a tool used in an impressive ‘splatter and drip’ painting – a teakettle placed on a traditional Chinese ceramic stove.

The History of Chinese Painting and the History of Modern Western Art Washed in the Washing Machine for Two Minutes (1987–93) represents the concept of clashing cultural collisions. An indecipherable mound of pulp created by blending the pulverized laundered remains of two art history books – Wang Bomin’s History of Chinese Painting (1982) and Herbert Read’s A Concise History of Modern Painting (1959) (the first history of modern Western art to be translated into Chinese) – balances on a pane of broken glass sitting on a Chinese tea box. Cleaning up untidy pasts and mutually exclusive systems of linear historical thought can evidently lead to a chaotic obliteration of the neat hierarchies of knowledge.

The House of Oracles (1989–92), placed in the sphere of Taoism, investigates the militant and aesthetic aspects of the avant-garde by creating a working studio within a tent. Inside, various instruments of divination, including a ‘weapon’ made of ground books glued to a metal bar, and large carved-wood roulette calendars suggest both military and artistic strategies. Outside, two sawhorses confront each other; metal plates atop each bear inscriptions of the result of an I Ching divination performed to predict the outcome of the first Persian War.

A series of sculptures dealing with issues of colonialism and imperialism was dominated by Bank of Sand/Sand of Bank (2000–6), a 20-ton scale replica of a structure in Shanghai that, since its construction in 1923, has embodied the various powerful entities of the day – from the headquarters of the British Hong Kong and Shanghai Banking Corporation to the Communist Municipal People’s Government Building to the current free-market Pudong Development Bank. Composed of sand and small amounts of concrete, Huang’s ‘castle in the sand’ representation of political, financial or state control made manifest is in a permanent state of disintegration, demonstrating that no reality lasts for ever.

Bat Project IV (2000–5), the last of a series of controversial re-creations of a section of the American spy plane that collided with a Chinese jet fighter in 2001, confronts recent geopolitical events with a Surrealist twist; the work includes an unlikely canopy of stuffed bats. But I prefer those of Huang’s works that demonstrate the timeless and basic animal nature of conflict between different groups. Theatre of the World (1993), a turtle-shaped cage containing live tarantulas, scorpions, millipedes, geckos, crickets and small snakes, is a miniature gladiators’ arena for a Darwinian battle of survival. This enduring Taoist demonstration of non-intervention (albeit in a contrived situation of his own creation) is at the core of Huang’s vision. 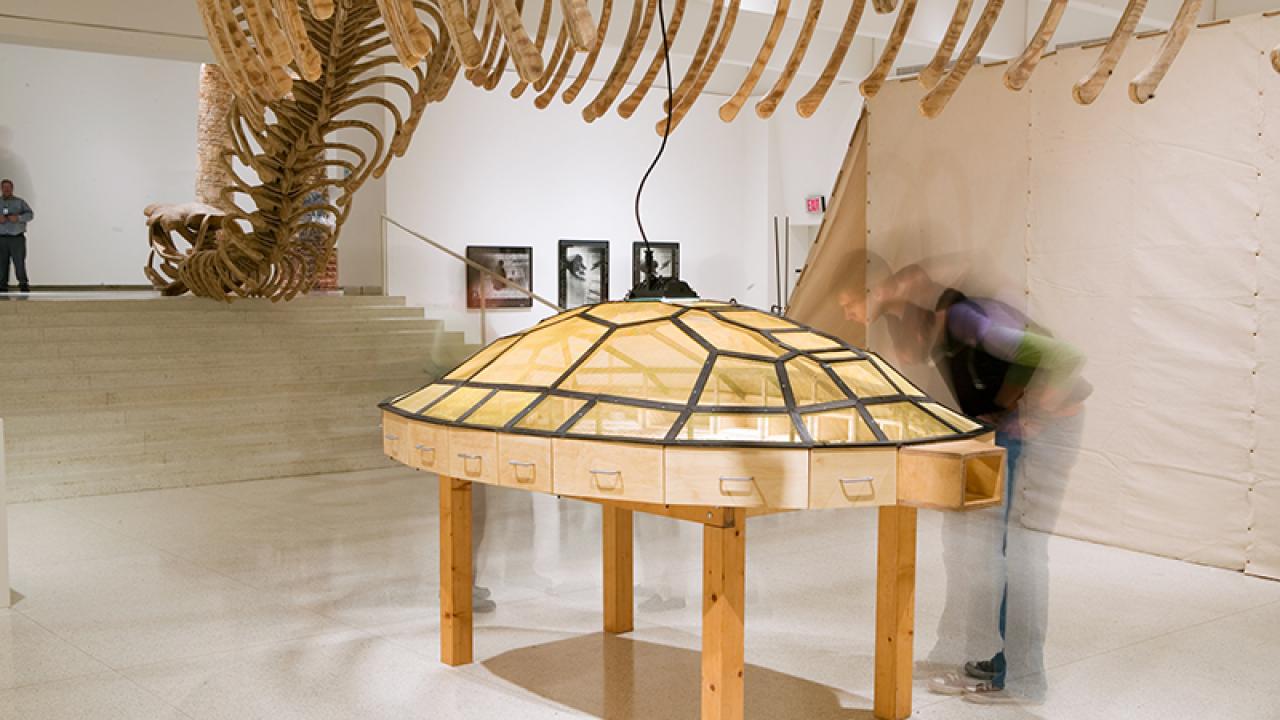