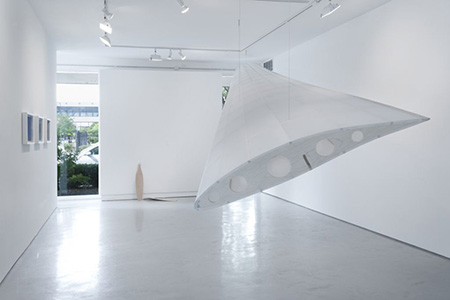 Marcel Duchamp and Constantin Brancusi were browsing the 1912 Paris Aviation Show when they happened upon the display of an aeroplane propeller. Prompted by the carved-wood form, Duchamp said to Brancusi, ‘Painting’s washed up. Who’ll do anything better than that propeller? Tell me, can you do that?’ Each artist answered the question in his own way: Duchamp with the Bicycle Wheel (1913) and Brancusi with Bird in Space (1928). Duchamp’s quip about painting at the aviation show was hearsay, transmitted decades later by his friend Fernand Léger, but the art world loves an origin myth, and Duchamp’s epiphany of the propeller still screams like a shuttle, slamming into our present day.

But can the Bird in Space fly? Iñigo Manglano-Ovalle tested this question in 2012 by fabricating a life-size steel-and-aluminium replica of Brancusi’s iconic sculptural whoosh, which he painted as a missile and set in a hypervelocity wind tunnel at Mach 10, or ten times the speed of sound. The Bird in Space ‘has unexpectedly good aerodynamic efficiency at hypersonic speeds, a goal not achieved by engineering for decades’, said a wind-tunnel engineer, quoted in a release by the United States Air Force, which oversees the hypervelocity lab.

Inspired by the cutting-edge machine aesthetic, Manglano-Ovalle continued his probe of high-technology-as-high-art in his exhibition, ‘Happiness is a State of Inertia’ (all works 2013). The show comprised untitled simulated facsimiles of the old propellers that Duchamp and Brancusi viewed, whittled from rock maple and propped against the wall and floor; Drone Wing, a model of an MQ-1 Predator wing in a convincing full-size, modelled after one the artist had seen at the 2007 Paris Air Show; and three photographs of a faked drone sighting.

At over eight metres in length, clipped from a fuselage and suspended from the ceiling just above one’s head, Drone Wing was poised to threaten gallery-goers, but it somehow didn’t seem threatening. Carefully crafted from Baltic birch and poplar wood and wrapped in sheer white solartex fabric, the quiet wing was more of a giant feather than a lethal vehicle, more manifest from a woodworker’s hands than the war industry’s assembly line.

Unlike, say, the aggressive assemblages of aeroplane debris by Nancy Rubins, or the totemic presentation of fighter jets by Fiona Banner, Manglano-Ovalle’s simulated wing was neither frightening nor sublime. Instead, the object’s ability to threaten its onlookers was deferred beyond the visual. However, should one have found visual pleasure in the skillfully constructed wing – and there were many opportunities, including peepholes that led the eye through a seemingly endless shaft of air inside the wing – it should have served as a warning to complacent aesthetes who adore abstractions, even the abstraction of a distant war. As such, Manglano-Ovalle’s sculptures are best viewed as props in a conceptual leap, like the props in Léger’s anecdote about Duchamp and Brancusi. Drone Wing, dressed in monochromatic white (the favorite colour of Modernism), appeared like a thought-bubble or a placeholder for a discussion that we must not postpone.

The 1909 Futurist manifesto claimed: ‘There is no masterpiece that has not an aggressive character.’ Drone Wing, then, despite its monumentality, is a proposition. The sculpture asks viewers to imagine a future in which a drone’s wing might be dead enough to be an actual artefact displayed within the aesthetic context of a gallery.