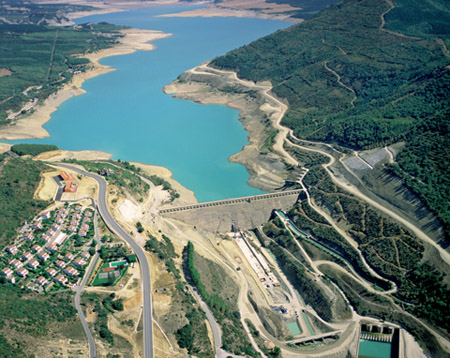 Extending over two floors of the recently renovated Fundació Antoni Tàpies, Ibon Aranberri’s exhibition ‘Organogramme’ is superficially dry – replete with maps, models, vitrines and slideshows. Yet its graphic precision constructs an alternative to a harmonious conception of nature that is ultimately saturated with ideas. If this exhibition evoked an odour-memory it would reek of concrete infrastructures, sea-cliffs, pine tree plantations, roosting bats, drowned villages, firework smoke and snow, of underground streams and ruined churches.

This is certainly not a didactic tour of the artist’s works from 1998 to the present. Although it importantly forms an encounter with the dictatorship of General Franco and the ideological underpinnings of his inaugurations of monumental reservoirs (which Aranberri had documented in aerial photographs for Política hidráulica [Hydraulic Politics], 2004–10), this is never explicit. That it is demonstrably implicit – in the Spanish and particularly the Basque landscape that is both the site and the protagonist of Aranberri’s works – is precisely what is at stake in this exhibition, which, as suggested by its title, works like an organizational diagram or interconnecting caves. Yet encountering it does not require us to be spelunkers of a metaphorical underworld. In fact, the cave is sealed off and is perfectly real. (Ir.T.nº513) Zuloa. Extended Repertory (2003–7) is based around the Iritegi cave, one of hundreds of similar caves logged by speleologists in Gipuzkoa province. Following extensive fieldwork and negotiation, Aranberri arranged for its mouth to be blocked with an imposing custom-cut black steel closure, leaving only a circular hole for bats. An A-Z survey of caverns from the Basque anthropology journal Munibe, and Iritegi’s actual Neolithic tool, bone and pottery finds, borrowed especially for this occasion, are made available through a series of 18 vitrines and backlit display cases, while a monitor shows a wintry pilgrimage to the site of this apparently brutalist intervention.

The main floor of the exhibition display has been apportioned with modular black metal structures and columnar supports that form variously opaque walls, screens or open grids which host and delineate work clusters. Among them, the wonderful Exercises on the North Side (2004–7) – which, like Política hidráulica, is an extended version of what was presented in Documenta 12 – is an exorcism of the mountain-as-genre that encompasses photography, ice-picks, video and 16mm film. This ingenious mode of presentation accompanies the fact that each existing project has been revisited and supplemented, and appears somewhere in a process of being surveyed, transitioned, catalogued or rebuilt. Even if some of his extensive projects may already be in part familiar to some viewers, their re-articulation together and the macro-analysis of the historical and political scarring of landscape and the ideology of heritage that emerges is a revelation.

The recent slideshow Gramática de meseta (Mesa Grammar, 2010) concerns Roman and Visigoth stone structures which are seen through re-photographed archival material in the flux of their relocation due to fascist-era infrastructure projects: ancient engineering garbled into a generalized past-as-ruin. In a counterpoint work, Found Dead (2007), a hulking stone obelisk is scattered in numbered pieces on the floor like giant bone fragments. The archetypal heroic structure of imperialist public space is no longer able to stand for belligerent glories.

A group of objects including a slideshow with a concrete screen, maquettes and a banner, Diseño de nuestro desarrollo. Ría y acantilado (Design of Our Development. Estuary and Cliff, 2000–5) involves another disrupted commemoration. In 2000 Aranberri proposed a firework display on the site of the ruin of the Lemóniz Nuclear Power Plant on the Basque coastline. Begun during the last years of the dictatorship in 1972, and cancelled following protests and violence in the 1980s, the aborted power station and the political and ecological narratives remembered with it were intended to be pyrotechnically reanimated for 20 minutes. Conceived also as a counterpoint to the flashy inauguration of the Guggenheim Bilbao in 1997, the fireworks were nonetheless – and appropriately – cancelled. Thankfully Aranberri’s Organogramme itself, long delayed by the Fundació Tàpies, has displayed itself with formidable results.