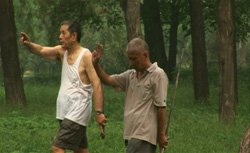 It has been quite some time since any gallery in Vienna put on an all-video exhibition. There was no lack of interest, however, in British video artist Imogen Stidworthy’s show, ‘Get here’, particularly since she was among the first officially announced artists of this year’s forthcoming documenta 12.
The press release bills her as an artist who explores the ‘visual-spatial and acoustic dimensions of language’, but while this may be true of much of her work, it did not appear to be the dominant aspect of this show. In the video 7AM (2005), for example, shot in a park in Beijing and projected onto a flat screen, not a single word is uttered. The film opens with a shot of blades of grass and the sound of birdsong. Suddenly, a leg protrudes from behind a tree trunk, stretched in the firm grip of two hands. The artist has apparently followed the advice frequently issued to tourists travelling in China to rise early and observe people taking their morning exercise in public spaces. The old trees of the park act as static elements framing details of the fluid physical movements of the tai chi and qigong exercises, which appear as ephemeral events in fixed shots. Stidworthy’s camera then follows a toy spinner on the floor before itself rotating through 360 degrees, to briefly reveal a person with a recording device. The sounds of the park create a dense atmosphere. Oriental culture is not portrayed as more ‘holistic’ per se, but simply as having developed everyday techniques of harmonizing body and mind.

In the video Substitutes (2002), shown on a monitor, we encounter another cultural context through a folk song. As the closing credits reveal, the filmmaker met her actors by chance after a football match. The two young Romanians were singing a melancholy song in the street, and Stidworthy invited them to give a repeat performance in the superior acoustic environs of the Akademie Schloss Solitude, near Stuttgart, where she was artist-in-residence. The video begins with a shot of the heavily annotated lyrics of the song written in Romanian. While the football fans fill the vaulted ceilings of the building with their singing, other off-screen voices can be heard trying to translate and interpret the song: what are the origins of this lament of separation and longing? And to whom is it addressed? As one of the commentaries explains, the men sing the roles of their parents who have remained in their homeland. Stidworthy thus presents the human voice as both an active and a passive medium: the men hear their own singing in the echo of the high room; these sadly missed sons are both the subject and the object of the pain they express.

After the tranquillity of 7AM and the melancholy harmony of Substitutes, the show’s tension-filled third piece, To (1996), comes as something of a surprise. Stidworthy and her father appear on two separate monitors, placed on adjacent plinths, and slightly turned towards one another. Reminiscent of a Lucian Freud model, the old man sits naked in front of a fireplace. With his distinctive facial features and articulacy, he might be taken for an actor. It quickly becomes clear that this man is a diva. ‘Adam certainly would not have been led into temptation by an apple,’ he remarks thoughtfully. ‘No, it must have been an onion, which brings tears to one’s eyes when one picks apart its layers.’ Thus the old man begins to peel back the layers of his memory in a grand monologue, until finally he speaks of a homosexual encounter he had that carries shameful associations with it: his seducer accosted him in front of a shop window; their eyes first met reflected in the glass. Whether these confessions are theatre or truth is left open to question. During her father’s monologue, Stidworthy sits silent and seemingly indifferent at a desk (interior details would appear to indicate that they were filmed in the same room; the sounds from both channels are also mixed). Occasionally, the artist hammers away at a typewriter, producing a rattle as if from a machine gun. The aggressive sound seems to speak of her wish to interrupt her father’s words or simply to suppress them. But by apparently taking notes, Stidworthy also hints at how traces of repressed, taboo experiences are inscribed on subsequent generations.

Jacques Lacan analyzed the riven nature of desire: how the attempt to satisfy one’s yearnings inevitably gets caught up in the dialectics of exchange with others, and how identity is constituted by that conflicted exchange. However unrelated the three works in ‘Get here’ may appear to be, ultimately they all connect to that insight: be it on the level of gestures, emotional expression, or the stories we tell ourselves about ourselves.