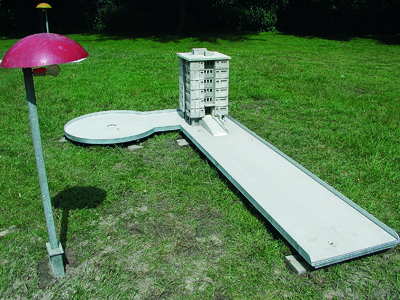 Who chose the gaudy patterns for the seat upholstery on the London Tube? I can see how, in some distant planning room, they might have seemed like a good way of disguising dirt or discouraging graffiti. But the patterns we’ve ended up with never look clean nor stylish nor inviting, and generally only make me think about what might be stuck in the fabric fibres. The same goes for the attempts to decorate the filthy tiled walls or the benches in the Underground stations, designed by default to withstand vandalism, or to be replaceable or endlessly repaintable. The work of German artist Ina Weber constitutes an index of this kind of urban architecture and its generic forms and fittings. In her drawings of improvised snack kiosks and lonely traffic
islands, in her scaled-down architectural constructions and in her full-scale outdoor installations, she asks: what if public furniture were made-to-measure, or waiting areas were customized to suit individuals’ needs? What if we could learn from the shortcomings of past architectural ideals to create structures with a more personalized function?

Weber’s works are closely linked to specific ideals regarding middle-class, and primarily German, architecture: the hopeful Modernist housing blocks of the 1950s and ’60s; the sterile shopping precincts and overly groomed pedestrian zones of the 1970s and ’80s. Her sculptures of high rises, petrol stations, public swimming pools and supermarkets show the kinds of architecture that were once (in the decades of her childhood) judiciously devised for their users. The spaces she chooses to replicate are those ‘cheap and cheerful’ ones dreamt up by city planners and then administered by people sitting behind desks stacked with manila folders. Works like Fußgängerzone (Pedestrian Precinct, 2001) or Haltestelle (Stopping Point, 2003) imitate what she calls ‘poor attractions’ – structures that are destined never to completely fail or succeed because they exist only to facilitate necessary public services, so, realistically, there is no ideal form they can take.

The most notable feature of Weber’s sculptures is their size – a scale she refers to as ‘too big and too unlikely to be models’. In fact, they relate to her own size and scale; to the amount of material she can lift or how high she can reach. Her series of ‘Hochhäuser’ (High Rises, 2005–7) for instance, made of readily available home-improvement materials such as plywood and house paint, investigate what it means to make an architectural structure that’s neither a model nor a functional building. The buildings she chooses to replicate are reduced to dwarfed, sculptural versions of themselves, as if they’ve had the macho taken out of them. Her high rises nestle neatly beneath the gallery’s ceiling, while her remake of an abandoned, late-1950s petrol station (Tankstelle, Petrol Station, 2003) fits easily in a single room, and a diving platform with swimmers’ starting blocks (Bad, Bath, 2003) hovers only a few feet over the gallery’s concrete floor.

Weber has also, however, replicated a type of architecture that is miniature in its original form. Minigolfbahnen (Minigolf Courses, 2002) is a succession of tiny concrete buildings dispersed throughout the gallery on abbreviated pitch-and-putt courses, which function, in Weber’s words, as ‘ridiculous plinths’ for the sculpted structures. For an exhibition in Braunschweig in 2004, Weber realized a functioning, outdoor, 12-hole miniature golf course, Trümmerbahnen (Debris Courses, 2004), where the obstacles at each hole take the form of buildings in various states of decay – some of them direct quotations of the ruins from the World War II that are still buried beneath the earth of Braunschweig, others references to decaying states of Modernist Utopian architecture or the German Romantic preference for fake ruins in landscaped parks. Isolated in a white gallery space the miniature buildings look like relics frozen in time, but installed outside, accompanied by a small blue kiosk loaning out golf clubs, with each hole illuminated by a characteristic ‘mushroom’ lamp, they become light-hearted, even functional, monuments again – examples of how the connotations of their typologies can be updated and adjusted. Players can putt the ball through the front door of an old East German Plattenbau tower block and see it spit out the side.

Weber’s full-scale installations or outdoor public commissions are adapted to take into account such failed architectural ideologies, attempting to learn from history’s mistakes. In Wuppertal, for instance, she installed a functional outdoor bus shelter in a 1980s’ shopping precinct. Though Wartehäuschen (Bus Shelter, 2007) is built to human scale, its materials nevertheless look artificial compared to the genuine, weathered, gum-covered bin in front of it; its tiles are a little too pristine and its mirrored interior a little too flashy for the surroundings. Weber’s bus stop also offers a feature not found in its regular counterparts: at night, neon tubes in the ceiling light up to fill the space with a rainbow of colour, enhancing the shelter’s function as a gathering place for its most frequent nocturnal occupants – the local youth. Weber’s additions are custom-made with the kind of care that urban planning offices or city senate meetings can’t accommodate. These humble forms suggest how the expectations and possibilities of Utopian architectures have been shrunk down to size, and show us what designs for better living could become.