BY Belinda Bowring in Culture Digest | 05 MAY 08

B
BY Belinda Bowring in Culture Digest | 05 MAY 08 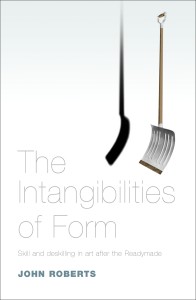 To describe the history of art after the ready-made as ‘the dialectic of skill-deskilling-reskilling’ is, for John Roberts, a way to move the discussion of Marcel Duchamp’s original radical gesture away from the ‘desire-value’ of mass culture and firmly into the realm of artistic and productive labour and the displacement of the artist’s identity. The Intangibilities of Form: Skill and Deskilling in Art after the Readymade takes this dialectic not only as its subject but also as its structural logic, being, in effect, divided in two.

The first three chapters are dedicated to the ways in which artistic ability and authorship were challenged by Duchamp’s early, unassisted ready-mades such as Bottle Rack (1914), and how the deskilling that they instigated in the artistic modus operandi can be differentiated from the generalized deskilling of productive labour under capitalism. This, argues Roberts, was because it brought forth a concomitant process of reskilling, of moving away from traditional artisanal techniques and towards intellectual and immaterial labour. In the book’s later chapters the legacy of this move is examined in post-Conceptual and contemporary practices (particularly collaborative ones, such as those seen in Andy Warhol’s Factory or the organizational structure of Art & Language), which shift the terms of decentred authorship away from the formal critique that dominated these debates in the late 1970s and ’80s.

It is the role of the hand in this process that provides a thread for Roberts’ argument. Here its presence does not only pertain to lost artisanal methods but also signifies ‘aesthetic thinking’, as typified not only by Duchamp’s retreat from the unassisted ready-made and by the work of El Lissitzky and László Moholy-Nagy, and with that the potential to disrupt systems of heteronomous labour (that is, that of the working class; in other words ‘free’ waged labour). Conversely, Roberts claims that its absence signals the incorporation not only of the worker into the artist but also of the artist into the worker: a ‘reciprocal readymade’ of sorts in which the art object is put to industrial use, as in the much-lamented attempts of Productivism and Constructivism to synthesize art and life. In a sense he does not favour either side of the argument but looks to every side to jam the logic of the other each time they veer toward the extreme.

By intervening between these arguments he breathes life into them, ensuring that whenever resolutions or certainties are approached they are once again buffeted off course. For instance, by describing recent artistic enterprises that do not depend on being recognized as art (such as the group Superflex) as ‘anti-visualization’, Roberts seeks to distinguish these socially motivated practices from those that, since the Conceptual art of the 1970s, have tried to break up the focal integrity of the art work. Yet his discussion is not a straightforward endorsement of this position, showing instead that in refusing to acknowledge the role of ‘the hand’, such practices can be mistaken for productive labour itself, whereas ‘aesthetic thinking’ indicates a form of work that is qualitatively different from productive labour.

While these counter-arguments and about-turns can make for frustrating read, Roberts is not engaged in simply thwarting readers’ expectations but rather in edging them ever closer to that synthesis of the dialectic at hand: namely, the moment that artistic subjectivity is released into productive labour with a transformative effect, thereby restoring the critical agency of the artist. It is in this sense that Roberts’ methodology itself works towards solving the double bind of the argument under scrutiny.